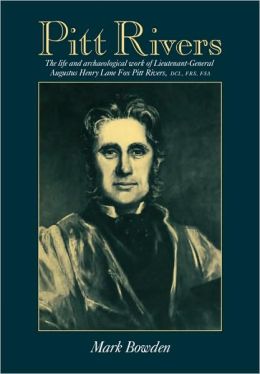 For many people the name Pitt Rivers will evoke a museum – a ‘magnificently eccentric museum’ in the words of the author – at Oxford University. Archaeologists however will also associate the name with a great nineteenth century originator of archaeological method, though their reasons for holding this opinion are more likely to stem from reading the views of a few archaeological historians than from a first-hand assessment of the work of Pitt Rivers.

Before reading Bowden’s excellent biography my ideas on Pitt Rivers had been shaped to a large extent by such views. Like those of Wheeler (1956:13) who followed and developed Pitt Rivers’ methods and principles, seeing him as the ‘greatest of all archaeological excavators’; Piggott (1966:45) who notes that he:

suddenly, and entirely on his own, began to conduct large-scale excavations in what we would consider a wholly modem manner … he published his results with extraordinary speed;

and Daniel (1967: 291) who saw Pitt Rivers as one of ‘the great discoverers and innovators of the last quarter of the nineteenth century.’ Impressive though these views were to me, when I first read them twenty-five or so years ago, I was swayed more by examining Pitt Rivers’ Excavations in Cranborne Chase (4 Vols, 1887-98) with its magnificent leather bound volumes, its photographs showing trenches cut precisely through gigantic earthworks and page after page of beautifully drawn flints, skulls and pottery. With these images in mind it was of particular interest to me to read the broader and more fully argued assessment of Pitt Rivers that this new book provides.

Sketchier appraisals by recent commentators give a more varied range of views on Pitt Rivers than those expressed above, perhaps not surprising given the current vogue for the writing of revisionist histories. While to some he remains among the greatest of archaeologists, even ‘the father of scientific archaeology’, others see him as little more than ‘an amusing eccentric with a private band and a menagerie of exotic animals’. Mark Bowden sets out these varied opinions clearly in the first chapter, using them to pose a question about Pitt Rivers; status as an archaeologist which he attempts to answer in the remaining chapters.

One possible source of confusion in any work on Pitt Rivers is name change that occurred in mid-career. Throughout most of his life his surname was

Lane Fox, under which his early archaeological reports are published. In 1880 he had to adopt the Pitt Rivers name on inheriting from Lord Rivers an estate of more than 32,000 acres in Cranborne Chase (Dorset- Wiltshire). It is to the biographer’s credit that he manages to use both names, in accordance with the time each was valid, without confusing the reader unduly. Uncertain of my own skills however I will use the name Pitt Rivers throughout this review even where obviously anachronistic.

Pitt Rivers’ early career was as a soldier, a role in which he seems to have enjoyed success, rising to the rank of lieutenant-general and being responsible for training the army in new techniques in musketry around the time of the Crimean War. This background was to serve him well as an archaeologist, providing organisational skills, the ability to read topography and draw maps and plans, and a sense of judgement in the interpretation of the many defensive earthworks k was to excavate.

He moved in a remarkable intellectual group that included Charles Darwin, Thomas Henry Huxley, Herbert Spencer, Edward Burnett Tylor and John Lubbock. Small wonder then that he had a broad range of research interests, as can be deduced by merely scanning his bibliography. Among more than 40 scientific publications are works not only on archaeology but also on ethnology, anthropometry, taxonomy, military history and museology. Although excavation reports are most numerous, other topics include the Egyptian boomerang, Andamanese and Nicobarese artefacts, early locks and keys, Benin works of art, early navigation and primitive warfare. The title of one paper, ‘On measurements taken on officers and men of the 2nd Royal Surrey Militia’ indicates that he was not averse to using his position in the army to obtain anthropometric data.

Despite his wide interests and an ability to develop new archaeological methods, Pitt Rivers’ views on human culture were very much in the evolutionist mould of his times. Cultural change was seen as analogous to natural evolution, a system in which socially and intellectually inferior cultures would eventually fade away through processes of natural selection. To illustrate this, he collected ethnographical and displayed it in his museums largely to instruct the public on how societies could be seen as ranging from ‘primitive’ at one end of the scale to ‘civilised’ at the other, the motivation for which according to Bowden being a desire to reinforce the ‘existing social order’ even though it also ‘supported a dangerous form of racism’.

Pitt Rivers excavated sites throughout Britain and on leaving the army through ill health was appointed the first Inspector of Ancient Monuments. In later years however, after acquiring the Pitt Rivers inheritance, he focused his research on the numerous archaeological sites that lay within the bounds of his estate in Cranborne Chase. Bowden provides a useful precis of all of Pitt Rivers’ major excavations. These descriptions are used to underpin the main arguments in the final chapter where the question of the status of Pitt Rivers as an archaeologist is addressed.

I was surprised to learn that Pitt Rivers’ excavation technique, the mainstay of his reputation, left much to be desired. A major failing was a lack of any real understanding of stratigraphy: strata clearly visible in photographs taken during excavation often escaped mention in the text; many finds were not assigned to strata; and he excavated in deep horizontal spits irrespective of the direction of the stratigraphy – a photograph republished by Bowden (Fig. 42) shows the removal of the infilling of a ditch with spits cutting across the strata. His digging methods were rough and ready, teams of labourers being employed to literally shovel out the deposits. As a result many small finds were missed, something on which Bowden can speak with particular authority having re-excavated several of Pitt Rivers’ sites and examined his spoil heaps.

Pitt Rivers’ claim to fame rests on other attributes.  His attention to the small finds he did recover was exemplary. They are often exquisitely illustrated in his reports. While not all readers might agree with his biographer’s assertion that ‘curation is better than publication’, the preservation of excavated finds of all classes in his museum collections certainly allows the better reinterpretation of his sites in more recent times. Moreover he viewed archaeology as an extension of anthropology and, as a consequence, built up matching collections of both archaeological and ethno- graphic objects to show longer developmental sequences – albeit to support his ideas of cultural evolution. In the classification of such objects he became an expert and is even credited with the invention of the word ‘typology’. But a more likely explanation is that he was the first to apply the word to material culture given that my Oxford English Dictionary suggests a somewhat different coinage

He was without doubt a brilliant interpreter of excavated evidence as not only Bowden, but also Daniel has noted. Also of importance was his development of experimental techniques to pursue specific questions. Among these were the building up of type collections of contemporary animal skeletons for comparison with archaeological bones and the conducting of field experiments in ditch siltation.

It was the wide range of Pitt Rivers’ achievements that in the author’s view justifies the title ‘father of scientific archaeology’. I must confess to being a little less convinced about the merit of such an al embracing title. Certainly Pitt Rivers made an out- standing contribution to archaeology. Although not without shortcomings he established a range of methods and put forward ideas on which later progress towards modem archaeology was based. Mortimer Wheeler for example was able to further this process by adding his own special skills as a stratigrapher.

For those with an interest in the history of archaeology this is a book not to be missed. It is well researched and, even if some of the author’s conclusions are open to dispute, the evidence is at least laid out in a manner that allows reappraisal. It provides a balanced account of the work of a leader in the development of archaeology whose reputation had previously been known mainly from brief comments by other archaeologists.

Daniel, G. 1967 The Origins and Growth of Archaeology. London: Penguin

Ron Lampert
Review of 'Pitt Rivers. The life and archaeological work of Lieutenant-General Augustus Henry Lane Fox Pitt Rivers, DCL FRS FSA’ by Mark Bowden
June 1994
38
64–65
Book Reviews
You must be a member to download the attachment ( Login / Sign up )