Review of ‘Pieces of the Vanuatu Puzzle: Archaeology of the North, South and Centre’ by Stuart Bedford 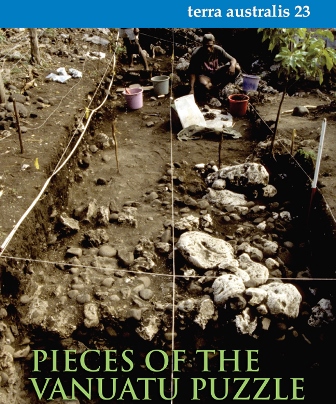 Vanuatu has played an important role in archaeological debates concerning the presence of pre-Lapita settlements and/or non-Lapita ceramics in Remote Oceania. As coherently argued in Pieces of the Vanuatu Puzzle, this is a remnant of initial research carried out in Vanuatu, much of which was completed in the 1960s and a failure of archaeologists in the decades since to provide empirical data from new fieldwork needed to refute these earlier assertions. Bedford’s monograph, largely based on Vanuatu fieldwork carried out as part of his dissertation research, fills this void in providing a plethora of empirical data concerning the timing and nature of initial colonisation of Vanuatu, and the later transformations which ensued in the post-Lapita era, most notably in the Mangaasi ceramic tradition. In doing so, Bedford approaches the archaeology of Vanuatu from a comparative perspective, in which the interactions between islanders and outsiders are emphasised through investigating temporal change and regional variation in the proposed ceramic sequences and non-ceramic artefacts.

Each of the 11 chapters is nicely written and well-illustrated. In Chapter 1, Bedford outlines his five major research objectives for the Vanuatu fieldwork: testing for evidence of pre-Lapita settlement; clarifying data from the pioneering works in Vanuatu archaeology by establishing a tighter chronological sequence; establishing baseline data for subsistence patterns; clarifying settlement pattern histories; and evaluating data for the existence of a pan-Melanesian incised and applied relief ceramic tradition. Previous archaeological work is synthesised in Chapter 2, with Bedford arguing that pre-1994, Vanuatu archaeology was stuck in a pioneering phase, leaving the region largely a terra incognita. This influenced his decision to produce an empirical, data-rich monograph which provides new regional sequences useful for testing hypotheses largely developed from the previous (and quite patchy) archaeological work.

In Chapter 3, Bedford describes the excavated sites, providing site plans, illustrations of stratigraphy and stratigraphic descriptions. While some discussion of the decisions leading to site sampling and excavation methodology (test pits, trenches, areal excavation) are offered, a more lengthy discussion of site sampling issues, particularly how they either facilitated or hindered inter- and intra-site comparisons, would have been best presented in this chapter, rather than interspersed throughout the later artefact analyses.

Chapters 4–8 provide detailed data on the ceramic analyses. I appreciated the clear and concise definitions of the variables chosen for use in the analysis (Chapter 4), but as a non-specialist (I am a lithic analyst) I would have preferred a lengthier discussion of why these particular attributes were chosen for study over others. In particular, why are these specific attributes the most useful for studying the specific research questions Bedford posed? Chapters 5–7 present in-depth data on the ceramics recovered from Erromango, Efate and Malekula. These data-rich chapters, accompanied by clear data tables and well-presented illustrations of vessel forms and decorative motifs, will clearly have long-lasting value to researchers studying in Remote and Far Oceania. Throughout, Bedford interprets the ceramic sequences in reference to his major research questions and objectives, clearly outlining how his ceramic data show support for basic cultural continuity in Vanuatu between Lapita cultures and those which followed. While less frequent, Bedford at times inserts brief explanations for some of the social and economic reasons behind the shifts in the ceramic sequences. Thus, at Ponamla, the high degree of homogeneity in ceramic fabric and vessel form and decoration reflect the short-term nature of the occupation, while the c.2600 BP proliferation in motif form might indicate numerous potters who were actively expressing and delineating intra-household identities.

Chapter 8 is the most useful ceramic-focused chapter for the non-specialist, as it synthesises the empirical data from Chapters 5–7. The vessel form and motif figures accompanying the discussion provide excellent visual aids. The chapter clearly demonstrates Bedford’s success in developing regional phases in the Vanuatu ceramic sequences and using these to propose inter-island and extra-regional comparisons. Among the important findings are that the Erromango sequence follows its own trajectory post-dating the plain ware phase, with a multitude of finger-nail incised motifs characterising the Early and Late Ifo stages, and the description of distinctive late period ceramics from Malekula with coil-made ‘bullet’-shaped vessels, termed the Chachara phase. The author clearly establishes that, based on current data, the initial settlement of New Caledonia and Vanuatu were associated with Lapita ceramics, yet starting immediately post-Lapita, ceramic sequences in each area followed their own trajectory. There is no convincing argument for anything other than in situ development of post-Lapita ceramic styles in Vanuatu and, based on robust datasets and tight temporal control, Bedford can firmly argue for a high degree of complexity in post-Lapita Vanuatu assemblages, particularly temporal changes in motif forms. He also can discount earlier claims of widespread homologous ceramic traits indicating cultural interactions or diffusion between Vanuatu and its neighbors at least up to 1000 BP.

Chapters 9 and 10 provide data for the non-ceramic artefacts and faunal remains. Their analysis once again highlights issues pertinent to the major research questions, notably chronological synthesis and change through time. While an in-depth analysis of manufacturing sequences, and production and use locales is beyond the scope of this work, a brief discussion of how the varied non-ceramic objects (shell adzes, armbands, pendants etc) were perhaps manufactured, traded, used and discarded would have been helpful in order to situate them within the prehistoric Vanuatuan political economies. As it stands, it is hard to interpret what the variation in materials by site and through time means, and as the author states, this is partially owing to sample size problems lending difficulty to inter- and intra-site comparisons. In contrast, the limited faunal data lend greater detail to the chronological interpretations and inter-site comparisons despite the small sample sizes, and it is with this dataset that Bedford proposes some of his more behaviour-based interpretations. Bedford argues that assemblages throughout Vanuatu provide evidence, albeit limited, for avian extinctions associated with initial human settlement and the Arapus site also provides evidence for the rapid disappearance of the now extinct terrestrial crocodile. Decreasing exploitation of the sea turtle through time may be related to over-predation, while analysis of the shellfish remains indicates optimal gathering of the closest resources, as well as over-predation of pristine populations, the latter particularly effecting sand-dwelling bivalve species. As the author notes in the concluding chapter, the evidence for faunal extinctions are with the earliest dated Lapita sites, lending further support that they represent the first settlement on Vanuatu and thus, providing another line of evidence laying to rest the old notion of pre-Lapita settlements.

It is clear in the discussion and conclusions (Chapter 11) just how aptly Bedford has used his extensive dataset to clearly address his research questions and major objectives. The monograph furnishes a wealth of new data that will be of great importance to archaeologists in Vanuatu and Near and Remote Oceania for decades to come. After more data have been gathered at a greater range of site types, future Vanuatu-based studies should use Bedford’s work as a stepping point for modelling new explanations for processual change, including the social and economic reasons for shifts in material goods production, and testing the role local innovation in artefact styles played at the household or community level in creating the changes seen in the regional chronological sequences. As Bedford notes, more work is also needed to outline elements of horticultural systems, and one would expect micro- and macro-botanical studies for reconstruction of prehistoric Vanuatuan subsistence in the future.

On a final note, while overall I was pleased with the monograph’s production, the binding had already split before I was finished with my review. This is a recurring problem with the Terra Australis series. The publishers need to rethink their method of book binding.

Jennifer G. Bahn
Review of ‘Pieces of the Vanuatu Puzzle: Archaeology of the North, South and Centre’ by Stuart Bedford
December 2006
63
63-64
Book Reviews
You must be a member to download the attachment ( Login / Sign up )