Review of ‘Owls, caves and fossils: Predation, preservation and accumulation of small mammal bones in caves, with an analysis of the Pleistocene cave faunas from Westbury-Sub-Mendip, Somerset, United Kingdom’ by Peter J. Andrews 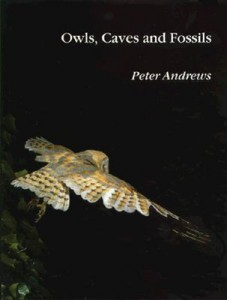 This book is the first volume of a series that examines the archaeological excavations at the Middle Pleistocene site of Westbury-sub-Mendip. On first reading it is clear that this book is a ‘must have’ for any archaeologist or palaeontologist. The same will apply to the forthcoming volumes if they are of the same standard as presented in this first volume.

While there are numerous important contributions to the taphonomy of large mammal assemblages (see Binford 1981, 1984; Frison and Todd 1986; Potts 1988), this is perhaps the first detailed account of small mammal taphonomy. This volume goes far beyond the familiar format of presenting the data, and then searching the literature or empirical record for ad hoc explanations which usually rely on simplistic and/or particular (and thus often unique) events that are then used to explain the observed archaeological pattern. Such approaches usually result in little understanding of the processes themselves but merely result in a search for similarities in form, and often confirm what the researcher is looking for. Instead Andrews’ first aim is to present a detailed account of what actually happens to numerous small mammal taxa during and after death (whether natural, accidental or due to predation) and what happens to the bones through a long-term study including varying climatic and environmental conditions. Thus an understanding of the processes involved in small mammal bone modification is presented before even considering the archaeological material. Andrews is concerned with teasing out the many factors involved in small mammal bone modification and preservation and is not involved in merely identifying a general similarity between extant and archaeological patterns. Andrews’ aim is to reach a fundamental understanding of small mammal taphonomy and uses Westbury-sub-Mendip as a laboratory in helping us understand the many problems. He does not review the small mammal bone assemblages in isolation but incorporates many avenues of research from micro-stratigraphy to extant small mammal community members and their correlation to ecological and environmental conditions. In so doing he gains some important insights into this Middle Pleistocene site.

Chapter 1 is an introduction to small mammal taphonomy. This chapter focuses on the many processes involved in the modification and preservation of small mammals. Chapters 2 and 3 examine the major influence on small mammal taphonomy, predation. Predation is the most important cause of death as well as the cause of their greatest modification. Chapter 2 addresses the problem of differential bias by a predator for particular prey. Chapter 3 continues the study of predation but concentrates on the differential modification to small mammal bone by numerous predator types. Chapter 4 presents an introduction to the taphonomy and micro-stratigraphy of cave systems. It examines the impact that this essentially closed environmental system has upon small mammal bone assemblages including deposition of animal carcasses; breakdown of carcasses; and movement of bone in cave systems. Chapter 5 introduces the cave deposits at Westbury and its context in relation to Chapter 4. Chapter 6 presents the small mammal faunas of the Westbury cave system. This examination enables Andrews to identify that a number of stratigraphic units are the result of a transported mixed assemblage, while others are due to either a European eagle owl or the result of one of his category 1 predators. Another bone assemblage from Unit 11 can be seen to have accumulated in a wet environment due to the great breakage, cave corrosion and manganese staining of the assemblage. Indeed, within a number of units several agents can be identified as having contributed to the archaeological assemblage.

Chapter 7 is the concluding chapter as it reconstructs the palaeoecology of the Westbury small mammal faunas. This concluding chapter is well founded and based on the previous discussions and analyses as systematically presented in Chapters 1 to 6. Thus by the time the reader has arrived at this concluding chapter some fundamental understanding of the processes involved in the formation not only of the site, but also the taphonomic modifications has been achieved. By examining the stratigraphic units of Westbury, Andrews has been able to identify a number of oscillating climatic conditions from warm-cool to warm-cold. This conclusion is based on the holistic approach of constructing a Taxonomic Habitat Index. This index system is based on extant small mammal taxa and its correlation to extant habitat types. It is clear that evolutionary forces are involved here. In order to account for ecological shifts through time by fossil mammals, Andrews calculates two sets of indices. The first set is based on extant species and their correlation to habitat types, while the second set is based on higher taxonomic units, i.e. genus, family, etc. Because many of the Westbury fossil faunas contain living”, species they are directly comparable to extant species and habitat correlations. In the case where extinct species are present within the Westbury system, they can usually be allocated to an extant genus and are correlated to a habitat type at the generic level. From this, a number of scores are constructed based on proportions of the different habitats occupied at the present time by these species or genera. From this scoring system all taxa identified within a unit or sub-unit are added together so that an average or peak is achieved to help define the most likely habitat of the assemblage. For example, if the majority of fossil species have relatively high index values for deciduous woodlands, it indicates that this habitat was present at or near the site.

Andrews’ microstratigraphic examination enables him to present the temporal sequence of Westbury and place numerous small mammal assemblages within this temporal context. In so doing Andrews has been able to identify the climatic oscillations during the accumulation of the deposits. From this analysis Andrews has refuted the previous climatic interpretations that suggested that this period was represented by a single interglacial episode. From a combination of the Taxonomic Habitat Index and pollen analysis it is further suggested that the region was characterised by broad-leaved deciduous woodlands during the warm climatic episodes while marked by pine-birch woodland during the cooler conditions.

Andrews presents a model of understanding and interpretation that is immediately applicable to any archaeological-palaeontological excavation. While the faunas that Andrews is investigating are European, his methodology is sound and is immediately applicable to Australian prehistory. For example, much of his discussion concerning bone modification is directly applicable and aspects of his Taxonomic Habitat Index can be modified for Australian fauna. Indeed much of Andrews’ methodology as outlined in this volume has been applied to other regions of the world including Olduvai Gorge (Andrews 1983), Laetoli (Andrews 1989) and the Miocene sites of Pasalar in Turkey (Alpagut 1990; Andrews 1990; Andrews and Ersoy 1990) and Rudabanya in Hungary (Andrews and Cameron in prep.).

In conclusion this book is a major contribution to taphonomic studies and is particularly important as it discusses small mammal taphonomy which, while long recognised as particularly important in the reconstruction of palaeoenvironments and ecologies has, however, been rarely examined in any detail. It is perhaps not unimportant that the author is not an archaeologist, but is best known for his work in Miocene hominoid evolution and palaeoecological studies. As such he brings a refreshing systematic approach to this area of study.

Andrews, P.l. and A. Ersoy 1990 Taphonomy of the Miocene bone accumulations at Pasalar. Turkey. Journal of Human Evolution 19:379-96.

David Cameron
Review of 'Owls, caves and fossils: Predation, preservation and accumulation of small mammal bones in caves, with an analysis of the Pleistocene cave faunas from Westbury-Sub-Mendip, Somerset, United Kingdom’ by Peter J. Andrews
June 1994
38
68–69
Book Reviews
You must be a member to download the attachment ( Login / Sign up )