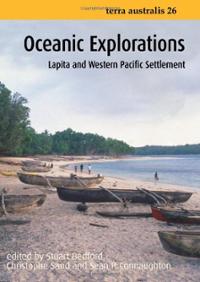 Over the past two decades, the field of Lapita studies has witnessed a sustained period of intellectual growth that can be traced back to the stimulus first generated by the Lapita Homeland Project of the mid-1980s. This reflects the now widely-acknowledged significance of Lapita as the archaeological signature of a critical period of expansion of one branch of Austronesian-speaking peoples into Near Oceania, and beyond into the previously unoccupied archipelagoes of Remote Oceania. The dominance of Lapita studies in Oceanic archaeology also stems from continuing and sustained field projects in such areas as the Bismarck Archipelago, Vanuatu, New Caledonia, Fiji and Tonga, which have continued to provide new and sometimes startling evidence with which to reassess our hypotheses and models about what Lapita represents.

Oceanic Explorations is the latest in a series of proceedings derived from various conferences of Lapita investigators, in this case the Nuku‘alofa gathering which was organised by David Burley and convened in the Tongan capital on 1–7 August 2005. The volume contains an Introduction followed by 16 papers, subdivided by the editors into three themes: (1) ‘Lapita Origins’ (two articles); (2) ‘Lapita Dispersal and Archaeological Signatures’ (the largest section with nine articles); and (3) ‘Lapita Ceramics’ (with five articles). The contributions vary widely in scope and significance, ranging from masterly syntheses such as Pawley’s treatment of the ‘testimony of historical linguistics’ and Chiu’s insightful work on Lapita faces, to preliminary reports on recent fieldwork (Felgate on New Georgia; Galipaud and Kelly and Aore Island; Nunn on Rove, Fiji; and, Connaughton on Falevai). Despite such unevenness, typical of this genre of conference proceedings, Oceanic Explorations is a valuable addition to the Lapita literature, one that will be essential reading for Oceanic archaeologists, although probably of less interest beyond this regional sphere. I cannot here do justice to all articles, but will touch on those that I consider to have the greatest import.

The introductory chapter, by Bedford and Sand, contextualises the volume in terms of four main themes – origins, boundaries, provinces and chronology – and addresses as well a number of ‘persistent problems’ in Lapita archaeology. With respect to origins, the authors suggest that ‘the debate … has largely remained at a standstill’ (p.2) since Green introduced his ‘Triple I’ model (standing for intrusion, innovation and integration). Rather than a lack of progress, however, this may simply speak to the enduring ability of Green’s model to accommodate new data. While the geographical boundaries of Lapita are seen as having remained ‘fairly much the same’ since Golson’s tentative review in the 1970s, the number of documented Lapita sites continues to rise year-by-year. Bedford and Sand contribute a table itemising 49 new sites, all reported since the last comprehensive inventory of Lapita sites published in 2001. This brings the grand total of known Lapita sites to 229. With respect to chronology, questions persist regarding a Lapita ‘pause’ in the Bismarcks and Near Oceania prior to the expansion of Lapita into Remote Oceania. Bedford and Sand also suggest that it is ‘very unlikely that Lapita dentate-stamping continues anywhere in the Western Pacific beyond c. 2500 BP,’ an important clarification of chronology (p.5). Among the persistent problems that they see continuing to nag at Lapita archaeology, Bedford and Sand point to poor preservation and taphonomic issues at many sites, the lack of analysis and complete publication of many collections, and continuing problems of radiocarbon dating and calibration in the mid-second millennium BP.

For this reviewer, one of the highlights of the volume is the second chapter, by foremost Pacific linguist Andrew Pawley, addressing Lapita origins and the nature of Lapita society from the perspective of historical linguistics. As many readers will know, the promulgation of a multidisciplinary approach to Pacific prehistory, especially one that incorporates the evidence of historical linguistics, has not always been met with open arms; indeed, there has been considerable resistance in some quarters to the idea that linguists can tell prehistorians anything meaningful about Lapita. Might the mere inclusion of this chapter in a volume on Lapita archaeology then be taken as a sign that linguistic prehistory is finally becoming more widely accepted? I certainly hope so. In any event, Pawley provides a masterful overview of the current subgrouping model for Austronesian languages and the place of Proto Oceanic (regarded as the language probably spoken by early Lapita communities in the Bismarcks). This is followed by a review of the lexical evidence for ‘selected cultural domains’, including canoes and sailing, architecture and settlements, fishing, agriculture and domestic animals, various kinds of material culture, kinship terms, and some social categories. It is, of course, in the latter domains that linguists such as Pawley have the most to offer, giving us insights into aspects of Lapita life that will probably never be recoverable through the archaeological record. Among these is the conclusion that Lapita societies were matrilocal, an interesting suggestion in respect of recent Y-chromosome data indicating that local males were being recruited into Lapita communities.

In a second chapter grouped under the ‘origins’ theme, Jim Specht re-examines the role and significance of small islands (islets, or even sand cays, in many cases) in the formative period of Lapita in the Bismarcks. Drawing in part on data from the early Eloaua Island sites, Specht hypotheses that some off-shore or small islet localities might have been special purpose localities, rather than simply residential locales. As he writes: ‘The linking of face designs and some vessel forms with deities or ancestors, and the possible use of cylinder stands as sound-producing instruments open opportunities for viewing at least some Lapita spaces as focal points of ceremonial or religious activity that required close association with the sea and comparative isolation from land’ (p.62) (I agree with his idea of ceramic percussion instruments, and Specht will be interested to know that the ECB ceramics include more than one example of ceramic drums, as yet unpublished). Specht’s chapter, while primarily a ‘thought-piece’, deserves serious consideration.

Most of the chapters in the long middle section of the volume present new data on Lapita sites, their geomorphological settings, and their chronology, based on recent and continuing fieldwork. I found the chapter by Specht and Torrence on the Willaumez Peninsula of New Britain especially noteworthy, as they have taken advantage of landscape-scale commercial plantation development to look at the distribution of pottery-bearing deposits over a substantial inland area previously under jungle and not amenable to archaeological survey. Their test excavations revealed numerous localities with dentate-stamped and other ceramics situated on a paleosol developed on the W-K2 volcanic ash, and hence documenting quite rapid recolonisation of this landscape following the massive eruption around 3480–3200 BP. Felgate’s chapter (left curiously unfinished …) offers a view of a quite different kind of Lapita landscape, the littoral fringe of New Georgia, where late Lapita ceramics have been found in thoroughly subtidal geomorphological contexts. Thus from both the inland terrain of the Willaumez to the reef flats of the Roviana Lagoon, it is evident that survey and excavation of Lapita sites must confront a diversity of challenging archaeological environments. For Tongatapu, Dickinson demonstrates how careful palaeoenvironmental reconstruction is essential to understanding the distribution of Lapita sites in the early first millennium BC. As Dickinson rightly points out, this kind of work ‘underscores the value of coordinated archaeological and geological investigations in Pacific Oceania’ (p.184). Farther north in the Tongan archipelago, Burley reports on his efforts to locate Lapita and later Polynesian Plainware sites in Vava‘u. The relatively low density of sites, in spite of systematic efforts to find them, leads Burley to the tentative conclusion that Vava‘u may have been a ‘frontier periphery’ of the Lapita world, a concept he hints may also apply to Samoa (p.196).

A final set of chapters deals primarily with Lapita ceramics. Wal Ambrose follows up on his earlier research into the nature of dentate stamping to argue (contra Simon Best) that a roulette was not used for the quick application of designs. This reinforces the idea that Lapita pottery decoration was highly labour intensive, and hence an ‘important social investment’ (p.220). Following the line of investigation of the social meanings of Lapita pottery, Scarlett Chiu puts forward a detailed analysis of Lapita face motifs from the Reef-Santa Cruz and New Caledonia Site 13A contexts, showing that differences in face motifs between sites are real (i.e. reflecting choices made by potters) and not artefacts of sampling strategy. She then continues to advance her compelling argument that face motifs signified particular house-based social groups. As Chiu writes, ‘by using these highly regarded symbols, with firm control over image innovation and reproduction, Lapita peoples were generating social hierarchy across their social and economic networks, while at the same time transforming themselves and the symbolic system’ (p.260).

To conclude, Oceanic Explorations nicely encapsulates the ongoing state of play in Lapita studies. Space limits have precluded me from discussing every chapter in the volume, and I have touched only on those I found the most interesting or innovative. This volume demonstrates that even as active field projects continue to provide new data, investigators are also continually reassessing the significance of well-known sites and collections to push the boundaries of our understanding of this remarkable archaeological phenomenon we call Lapita. The editors are to be congratulated in bringing out the proceedings of this latest Lapita conference in a timely manner.

Patrick V. Kirch
Review of ‘Oceanic Explorations: Lapita and Western Pacific Settlement’ edited by Stuart Bedford, Christophe Sand and S.P. Connaughton
June 2009
68
67-69
Book Reviews
You must be a member to download the attachment ( Login / Sign up )