Review of ‘Nomads in Archaeology’ by Roger Cribb 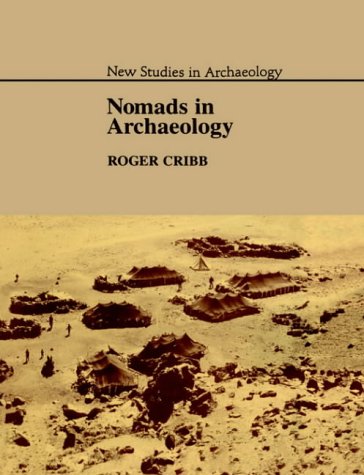 Hunter-gatherers are not nomads? Nomads live in stone tents? Though always willing to learn something new I did find these two pieces of information surprising. But it is all a matter of how terms are defined of course, the author having chosen a definition for nomadism that excludes all except those pastoral nomads whose habitat extends from Turkey to central Asia. Actually there is some etymological support for this narrow definition, the word ‘nomad’ having been derived from a Greek word meaning ‘pasture’ (OED), though modern usage is usually more general.

The pastoral nomads who are the main subject of this book inhabit a mountain region that covers much of modern Turkey and Iran. In their choice of camp sites they often favour proximity to the ruins of caravanserai and such ancient monumental cities as Petra, where they recycled the blocks of building stone for use as low walls around their tents. In a few cases these stone walls extend upwards to the full height of the structure, the tent portion being reduced merely to a flattish roof consisting of a sheet of fabric or plastic on stick rafters supported by the stone walls. Being typologically continuous with real tents such dwellings are still classified as tents even though the main building material is stone.

In its aims the study is in the main ethno-archaeological, seeking, in the present day configurations of camp site and living space, underlying patterns that an archaeological investigation might also be able to decode. Much of the book is thus a detailed record of such material evidence as the alignment and grouping of tents, and how the spatial patterning is influenced by kinship, socioeconomic status, hereditary rank and the proximity and size of associated pastures; it catalogues also a wide range of portable domestic utensils; it plots the patterning of domestic activities within dwellings; and records the architecture of the dwellings themselves and notes how they vary seasonally. All potentially useful for an archaeologist, but what about that particularly valuable kind of observation, the way in which objects are discarded – and perhaps relocated later by site maintenance activities? Here ethnographic information is lacking. Although plans of settlements show middens and ash heaps, and there are photographs of discarded pot sherds, these observations are entirety archaeological.

An example of this approach may be seen in the treatment of Ali’s Camp, a temporarily abandoned single dwelling and its surrounds chosen for detailed investigation. A year previously the author had seen this site occupied by Ali and his family who had since moved to a new location. Some ‘on-site activities’ and the general pattern of spatial organisation had been observed during occupation of the site. However, the detailed patterning of site usage is adduced entirely by archaeological methods, specifically the plotting and spatial analysis of various classes of discarded object at the abandoned site. Emerging from this analysis is a spatial pattern consisting of a series of concentric arcs around an external hearth, each arc containing different types of discarded material to suggest specialised activity zones.

It seems to me that the author lost a golden opportunity in failing to check the validity of his archaeological interpretations with some of ‘ethnographic archaeology’ (using lain Davidson’s definition) that is testing them against the memory of informants. After all, why bother to investigate archaeological patterning at a site seen in occupation only a year previously unless to elucidate an ethnoarchaeological methodology? A possible reason for this perceived lapse emerges later in the book: in commenting on the Nemrut Dag site the author notes that although ethnographic archaeology is the usual practice it was not used by him because of difficulties in locating and interviewing those who had used the site recently and, even if this had been possible, ‘the memory of the occupation … would most likely have been hazy’. This is a weak excuse for not having tried. In my experience people who are taken back to a site and shown the physical evidence usually have a prodigious memory of events, a view supported by a number of other successful studies of this kind.

The main failing of this study generally is that it tends to be ethnography plus archaeology, each done well in its own right, but leaving some of the potentially more rewarding linkages between the two unexplored. This leaves the archaeological investigation of recently occupied sites rather without purpose apart from showing that material evidence for the habitation of pastoral nomads does survive, at least for a few seasons, and can have a patterned distribution. In a project claimed as being ethnoarchaeological this disassociation between the two kinds of evidence seems surprising but can be traced back to definitions given in the opening chapter. Under the heading ‘Ethnoarchaeology’ the author is more concerned to damn the overuse of ethnographic analogy and laud the advantages of middle range theory (also loosely defined and not used to any discernible advantage in this book) than to display his ideas on what ethnoarchaeology is and how it might be used with regard to pastoral nomads. I suspect that he would find Meehan and Jones’ excellent book, Archaeology with Ethnography: an Australian Perspective, Department of Prehistory, RSPacS, Australian National University: Canberra, 1988, salutary reading.

The strength of the book lies in its extensive catalogue of ethnographic observations slanted at future archaeological studies – or at least one presumes that the observations will be useful for this purpose.

Lampert, R.
Review of ‘Nomads in Archaeology’ by Roger Cribb
June 1992
34
65–66
Book Reviews
You must be a member to download the attachment ( Login / Sign up )