Review of ‘Ngarrindjeri Wurruwarrin: A world that is, was, and will be’ by Diane Bell 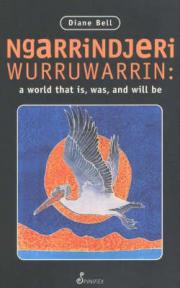 This impressively thick, detailed and scholarly book seeks to place on record the life, culture and beliefs of con- temporary Ngarrindjeri people, focussing on the experiences and knowledge of women. In the process it redefines how anthropology (and particularly anthropology in the ‘settled south-east’ of Australia) should be conducted.

Ngarrindjeri Wurruwarrin is the result of two years work in which the anthropologist worked in the field, researched the written sources and wrote up her text. So far, this is the style of anthropology we have come to expect. However, Bell then returned to the community and checked her text with the people about whom she was writing. The anthropologist’s words are augmented by those of her ‘informants’, and theirs can be seen (in a different font) commenting upon the anthropologist’s text and upon her conclusions. The result is a collaborative anthropology, not one which appropriates.

The Ngarrindjeri people, for those who have been out of Australia for the last four years, have been trying to protect ‘the meeting of the waters’ (a place about which there is restricted knowledge), located in the vicinity of Hindmarsh Island, near the mouth of the Murray River. A number of inquiries have been held and a large number of legal cases have been heard on the issues raised. These inquiries have shown that it is impossible to protect Aboriginal Heritage under present Federal and South Australian Law. The parliament, when making laws about Aboriginal Heritage, always reserves ultimate decision-making power to the -Minister. Ministers usually see the request for development as more compelling than the request for protection of Aboriginal Heritage. Further, recent cases in the High Court have demonstrated that the racism embedded in the Australian Constitution allows governments to make discriminatory legislation (pp.595-603).

This book is the Ngarrindjeri community’s response to perceptions of governmental insensitivity. The recent book launch was followed by a march to present the Attorney General with a copy, and to ask him to overturn the findings of the Hindmarsh Island Bridge Royal Commission (Stevens 1995). At Parliament the Minister and the Shadow Minister for Aboriginal Affairs met the march. The Minister accepted a copy of the book on behalf of the South Australian government; the Shadow Minister bought his copy. The Attorney General, however, refused their request.

A book which was researched and brought to publication in two years might be expected to have many errors. Yet I found only two small typos, and no spelling or grammatical errors. The production values are high, the text is clearly printed, the photos (mostly) clear, with stiff card cover, glue binding and good paper. Similarly, the text is written in a most engaging style (clear language while working through complicated issues and complex evidence) that makes reading this book a joy.

One of the most engaging features of Ngarrindjeri Wurruwarrin is how it takes a number of strands of evidence and weaves the women’s story. The emphasis on weaving is not accidental.

You have to keep inserting different lengths of different rushes so that you can weave around, and then you don’t have just one weak spot in one place. You wouldn’t just get a bunch and stick it in. You keep adding one or two to keep the same thickness. She’d keep the stitches close together, the closer the better, and holes, you punch ahead of where you are, and then you can pull the rushes through and tighten each one as you go. The tightness of the stitches is like the closeness of the family (Doreen Kartinyeri p.67).

Professor Bell shows that weaving has a number of meanings for women, and is used as a metaphor in women’s dis- course. This emphasis on women weaving lives and binding people together is unique to this ethnography.

Despite the obvious cultural meaning attached to weaving, in the ethnographic literature, weaving is almost invisible. Although Milerum made a film about weaving, it is only in the periphery of a man’s responsibilities and is therefore low profile. Thus, the importance of weaving and the gendered disparity in knowledge about it stands in contrast to the official conclusion of the Hindmarsh Island Bridge Royal Com- mission. Indeed the major debate about Ngarrindjeri knowledge in the last four years has been whether there was or is gender-restricted knowledge in Ngarrindjeri life. A couple of European male ‘experts’ stated (with significant consequences) that there was restricted men’s knowledge, but no restricted women’s knowledge. In addition, a small number of Ngarrindjeri women opposed the Heritage claimants (pp. 518-20 and see Wilson 1998).

The Royal Commission claims to demonstrate the non- existence of women’s business in Ngarrindjeri society by reference to the 1993 Ronald and Catherine Berndt ethnography, A World that Was: The Yaralde of the Murray River and the Lakes, South Australia. Its style of ‘re-constructive ethnography’ was used to call into question the credentials of contemporary Ngarrindjeri custodians. Bell’s title Ngarrindjeri Wurruwarrin-‘ ‘knowing and believing in it is the answer to understanding it’ (translation by Tom Trevorrow, p.iii) – is a contemporary Ngarrindjeri statement of the legitimacy, continuation and future of Ngarrindjeri life.

Bell refers to Berndt and Berndt (1993) throughout, and illustrates a number of biases that skew their work. Their greatest bias was an assimilationist view, that ‘half-castes’ were without culture, and must become culturally white, while the ‘fill-bloods’ (conveniently removed from civilisation or dying out) could be treated as real Aborigines (Elkin 1979:381). The very term, ‘reconstructive ethnography ‘draws a line under Ngarrindjeri life: ‘it is finished’. Moreover, the Berndt’s presentation of apparently unconnected fragments reinforced this belief.

Ronald and Catherine Berndt were 26 and 24. Their age and childless status may have affected this, their earliest anthropological fieldwork (p.444-5). They worked mostly with Albert Karloan, a senior Yaralde man. Catherine spent some disappointing time with Pinkie Mack, a senior Yaralde woman. Despite being renowned as a midwife and song woman, Pinkie Mack frequently ‘forgot’ songs, stories and knowledge and gave Catherine Berndt very little information (p.463-8). The alacrity with which Berndt and Berndt equated Pinkie Mack’s evasions to lack of knowledge was internally consistent, given that Mack, a ‘half-caste’, was less likely to know things than Albert Karloan, a ‘full blood’. This left the Berndt’s reliant upon Karloan, and this reliance is shown throughout their book. The world of a man is described in meticulous detail. Karloan’s illustrations lovingly depict nets, spears, butchery cuts, clothing and ceremonies. On the women’s world there is very little, and this is compounded by the Berndts belittling what they do discuss (e.g. 1993: 33,77).

It is somewhat surprising that Catherine Berndt, who was well known in her later years for her work with women, should have underplayed womens’ lives. Did she fail to see, when writing up her notes years later as a senior anthropologist, that Pinkie Mack might have been evading her questions, not displaying ignorance? Aboriginal cultural rules concerning gender-restricted knowledge make it almost certain that a male researcher (no matter how skilled or experienced) will not be let into the world of women – Aboriginal people rarely contravene gender restrictions on knowledge. More- over, the history of anthropology demonstrates that our ability to research a gender is directly related to the proportion of anthropologists of that gender. When anthropology was an exclusively male domain, Aboriginal men had a rich and varied secret life, while Aboriginal women had none. When women were allowed to become anthropologists – and only after the male anthropologists stopped demanding that women do masculinist anthropology (de Lepervanche 1993) – we ‘found’ a rich and varied women-only life.

This book demonstrates what should have been recognised in 1994, when the request for legal protection of ‘the meeting of the water’ was first put. That is, gender restrictions on knowledge mean that records or studies by men see the man’s world, studies by women see the women’s world. The uniqueness of Ngarrindjeri Wurruwarrin is due to the genius of Professor Bell’s genius, but it also owes much of its distinctiveness to her gender.

Berndt, R.M. and Berndt, C.H. 1993 A World that Was: The Yaralde of the Murray River and the Lakes,South Australia. Melbourne: Miegunyah Press.

Knight, J.
Review of ‘Ngarrindjeri Wurruwarrin: A world that is, was, and will be’ by Diane Bell.
December 1998
47
73–75
Book Reviews
Download
You must be a member to download the attachment ( Login / Sign up )