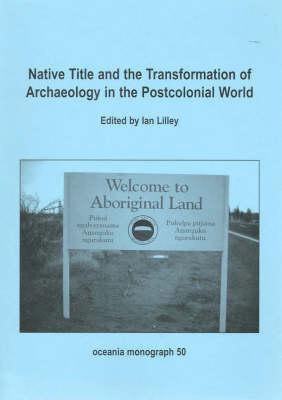 Native Title and the Transformation of Archaeology in the Postcolonial World edited by Ian Lilley. Oceania Monograph 50, University of Sydney, Sydney, 2000, 180 pp., ISBN 1 864 87 281 0 (hbk).
The thirteen papers in Native Title and the Transformation of Archaeology in the Postcolonial World constitute a timely and thought provoking volume on the role of archaeology in contemporary sociopolitical contexts by focusing on land rights determinations. This collection’s origins lay in the symposium on Archaeology and Indigenous Land Rights in Settler Societies at the 1999 World Archaeological Congre s in Cape Town, South Africa. The book succeeds in its aim to present ‘a panoramic snapshot of the ways the future of the discipline is being shaped by rapidly-evolving indigenous land-rights movements in … post-colonial societies’ (Lilley 2000:1). The (then) recent Australian Miriuwung-Gajerrong and Yorta Yorta Native Title claim decisions (one positive, one negative) are raised by nearly all of the Australian contributors (Lilley, Fullagar and Head, Harrison, McDonald, Murray, and Veth) who view the legal judgements, particularly the Miriuwung-Gajerrong decision, as indicating shifts in the practice and application of archaeology.

In Part A, Bradshaw’s paper describes Hammersley Iron’s Heritage Program, providing an interesting case-study into one mining venture’s perspective on working with Aboriginal communities and Aboriginal heritage in the context of their need for long-term and uninterrupted access to mineral resources. Fullagar and Head’s discussion of how, in debates about national identity and in legal considerations, the antiquity and continuity of Australian Aboriginal culture is emphasized, and how archaeology faces challenges in identifying ethnicity in pre-contact archaeological records. In particular, they explore the success of archaeology in conjunction with rock-art studies in ‘document[ing] details of connection between people and place’ (2000:33), evidence which is essential to proving native title.

Following this point, McDonald’s paper draws on her studies of regional rock art assemblages, considering how useful rock art studies can be in native title decisions if it can be shown that art functioned at a local level in past societies. McDonald discusses the implications to interpreting cultural continuity following rapid changes in Aboriginal society following European settlement, a point also considered in Harrison’s paper when he presents evidence from a Kimberley pastoral station for continuities and transformations in Aboriginal society, technology and economy from the pre­ contact period into the post-European period.

Murray’s paper explores significant ethical and professional questions regarding objectivity in archaeological research and the role of archaeological interpretation in accounts of Aboriginal history. He finds the Yorta Yorta judgement indicates that for southeastern Australia in particular , the Native Title Act in its present form is weakened by not taking into account the range of data (oral, archaeological, documentary) demonstrating the diversity of Aboriginal experience following contact. Murray states that ‘archaeological practice [should]…produce information which can more readily support arguments of transformation and discontinuity as being central to the experience of Aboriginal people’ (2000:76). Veth’s paper specifically explores the relevance of archaeology in determining native title. Like Murray, he warns against the use of archaeology as a tool for providing ‘a convenient history of seamless linkages into the past’ and the production of bounded entities and groups but suggests that the discipline is ‘ideally suited to examining issues of both continuity and transition in patterns of occupation, land uses and social organisation’ (2000:79).

In Part B, Klinko and Wright examine the role of archaeology in British Columbia, Canada, where recent legal judgements have made archaeological evidence important in negotiations and legal decisions regarding native title, resource use and indigenous rights. Nicholas explores the ways that in Canada indigenous people’s involvement is shaping and strengthening archaeology there. Lilley compares how archaeological practice in Canada, South Africa, USA, New Zealand and Australia addresses indigenous cultural heritage. Prins examines how Southern San (South Africa) descendants of Later Stone Age hunter-gatherer communities, who left behind a rich archaeological corpus, have been excluded from archaeological research projects, heritage management and the development of heritage legislation. Rainbird explores colonial-indigenous interactions in Guam, most recently with the Americans, and compares the situation there with Australia, citing the use of archaeological evidence in Chamorro claims to a homeland and also how certain groups view archaeological investigations as desecration. Sand examines how in New Caledonia archaeology plays an important role in contributing to long-term and short-term histories of the archipelago.

This volume reminds us how as contemporary society changes, in some part archaeology changes too, with implications for subject, procedures and theory. The title understates its subject matter as important issues other than native title are raised. These include national identity, academic and political rationales, reconciliation, ethnicity in the archaeological record, and collaboration between archaeologists and communities. Native Title and the Transformation of Archaeology in the Postcolonial World is worth having, as it provides an extremely useful insight into the direction of archaeological practice in Australia. Given the subject matter, the only weakness of this volume is the absence of indigenous perspectives (although it was clearly the aim to have indigenous contributors in the original WAC session).