Review of ‘Much More than Stones and Bones: Australian Archaeology in the Late Twentieth Century’ 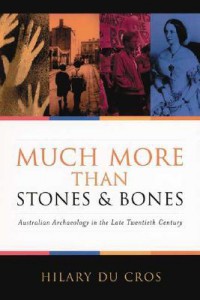 Du Cros’s study of Australian archaeology has come at a time when archaeologists are interested in reviewing and historicising their discipline for several different reasons. One of these could be that, as the century ticked over, there was a desire to see how far archaeology had come. As the first generation of Australian archaeologists came to retirement age, it was time to review and celebrate their achievements. Another explanation for this introspective turn derives from a broader interest in the social context of archaeology, seeing research as a product of a particular time and place rather than as completely objective science, with a progressive, evolutionary trajectory. Yet another relevant theme here relates to the establishment and growth of the heritage industry, a movement that has seen ‘archaeological research value’ expressed in Australian legislation as an aspect of ‘cultural’ or ‘heritage significance’—as a collective possession of the nation and its ‘estate’. Archaeology situated within the philosophy of the heritage movement is therefore ‘public property’, a ‘national asset’ to be managed for the benefit of its stakeholders or owners. It is significant that 2002 saw publication of another important book concerning the social context of Australian archaeology, focusing on the relationship between archaeology, Indigenous people and the broader public (Colley 2002).

One of du Cros’s main aims in this book seems to be the demystification of archaeology as a job done by (relatively!) ordinary people, with a range of workplace and operational issues, just like any other job. Du Cros states that erroneous myths or misconceptions about what archaeology is, and what archaeologists do, impact upon heritage management in negative ways (page 15). Another aim of the book therefore seems to be to enable archaeological research to contribute more effectively to Australian cultural life by providing a clearer explanation to the interested public about its nature and aims.

In Chapter 1 du Cros considers some of these misconceptions about Australian archaeology, as well as the ways in which archaeologists themselves have responded to local historical myths which are sometimes held dear by communities. The latter section introduces an important issue for any consideration of the social context of archaeology: namely the authority of the discipline of archaeology and the ability of its interpretations of the past to prevail over alternative versions.

Du Cros states that her intended audiences are those who have dealings with archaeological research and ‘entry level’ students of archaeology. The book is based on a case study approach, featuring five major cases which pick up on the areas and issues where Australian archaeology has gained the highest media profile; firing controversy and conflict in most instances. The case studies cover: excavation and community involvement (Chapter 3), Tom Haydon’s film The Last Tasmanian (Chapter 4), First Government House site in Sydney (Chapter 5), archaeology and the Franklin Dam (Chapter 6) and human skeletal remains (Chapter 7). She draws on a diverse array of sources including interviews, media reports, scholarly articles and unpublished consultants’ reports and this is undoubtedly one of the main strengths of her work.

While another review described du Cros’s style and tone as ‘gossip’ (Mackay 2003) because she draws in details of the personal as well as the professional lives of archaeologists, I have more sympathy with this approach. I prefer to see the ways in which research, theory and practice develop as the result of a complex amalgam of individual’s strengths and interests, as well as social and political factors, rather than as a discrete, disciplinary evolution. In this vein, biographies can indeed be an important way to understand how social, political and personal circumstances combine to provide a microcosm of their own times. Admittedly, it can be a fine line between a voyeuristic interest in the personal lives of people who have made an important contribution to archaeological research, and a genuine attempt to link trajectories of archaeological research to the personalities and interests of influential archaeological writers. I don’t think du Cros crosses this line, however her motivations for using this technique could have been more fully explained by further, in-depth analysis. For instance we know from her past research that du Cros has a keen interest in feminist analysis and in sexism and gender dynamics in archaeology. Yet while we hear the voice of a feminist in this work, sexism is not an overt object of examination. Du Cros’s comment on the ‘Boy’s Own adventure’ attitude towards fieldwork on the Franklin Valley, Tasmania, is one of the few instances where this issue enters her discussion. Otherwise, discussion of feminist critique is limited to the section in Chapter 2 on archaeology and postmodernism (page 37). Changes to attitudes towards women in the work force, and the broader intellectual implications of feminism, must be one of the most significant social changes of the late twentieth century, and du Cros has been influential in raising this issue in the Australian context. The biographical style would have been amenable to raising more feminist issues for Australian archaeological practice and I am surprised that it is not a greater feature of this work.

Overall the book is attractively presented with a great cover and lots of illustrations and photographs inside—although the quality of the reproduction of some of these must have been a disappointment. While there are some niggling errors, such as consistently describing archaeologist Judy Birmingham as Cambridge trained, we must admit that in undertaking accounts of events in recent years, du Cros dives into dangerous waters. She has chosen to see the players as individuals and personalities and has rejected the academic veneer of a depersonalised account. It is inevitable that some will not see events as she sees them, it is also inevitable that those actually involved in the events will know of factors and circumstances unavailable to author. So was the risk worth it? I think that we need writers who are brave enough to critique and make sense out of recent events and to reflect upon why we, as archaeologists in Australia, do things the way we do. In this vein du Cros’s research is a valuable addition to the literature, and one that is accessible to a broad cross section of the community. On the negative side I think the book missed the opportunity to link the case studies to the broader cultural discourses of their time, and to account for the cultural, political and social changes which are an undeniable feature of the late twentieth century. Archaeology itself has been intertwined with cultural change, meaning that the ‘past’, its values, and the act of studying them, has also been transformed.

Mackay, R. 2003 Review of ‘Much More Than Stones and Bones: Australian Archaeology in the late Twentieth Century’. Archaeology in Oceania 38(2):126–127.

Ireland, T.
Review of ‘Much More than Stones and Bones: Australian Archaeology in the Late Twentieth Century’
2004
59
70–71
Book Reviews
Download
You must be a member to download the attachment ( Login / Sign up )