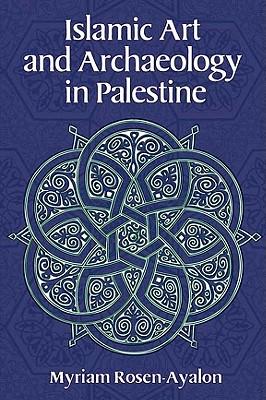 Myriam Rosen-Ayalon, the Mayer professor of Islamic art and archaeology at the Hebrew University of Jerusalem, is a renowned scholar of Islamic material culture, and her book is surely a welcomed addition to the growing field of literature on the pre-modern Islamic centuries in Palestine. This concise volume is a distillation of many decades of dedicated and outstanding work by Rosen-Ayalon, characterised by both excavations (e.g. at Ramlah, the Islamic capital of Palestine) and architectural studies, notably her pioneering research into the monuments on the Haram al-Sharif (‘the Noble Enclosure’) in Jerusalem, the site of the Jewish temple destroyed by the Roman general (and later emperor) Titus (d. 81 CE) and revitalised by the early Muslims with the iconic Dome of the Rock and the adjacent al-Aqsa mosque. Few readers today will be unaware of the historical significance of the Haram al-Sharif, around which modern Israeli-Palestinian politics revolve (or, better perhaps, whirl), most notably with the visit in the year 2000 to the Haram by former Israeli prime minister Ariel Sharon and the second (‘Al-Aqsa’) Intifada that followed. An understanding of current events in Israel-Palestine can only proceed with knowledge of this long and complex history, and Rosen-Ayalon’s book offers a positive insight into the formation and development of a Muslim presence in Palestine from the time of the Islamic expansion in the early seventh century CE until the end of the Ottoman period (early twentieth century).

Following an introductory statement on Palestine and its historical place in the Middle East, the rest of the book is arranged chronologically. It begins with a brief consideration of pre-Islamic Palestine, the Arab presence before Islam, and the subsequent expansion of Islam into the region (Chapter 1). Chapter 2 details a period of high activity under the first Islamic dynasty, the Umayyads (661-750 CE), who were based in Damascus and took great interest in Jerusalem. It was one of their number, Abd al-Malik (ruled 685-705 CE), who was responsible for building the exquisite Dome of the Rock and his son, al-Walid (ruled 705-715 CE), who completed the adjacent al-Aqsa Mosque. These and accompanying monuments are considered in sufficient detail by Rosen-Ayalon (pp.29-43). It is gratifying to see that she also pays full attention to the historical periods that followed (Chapter 3), until the arrival in 1099 of the Crusaders (a period not dealt with in this book), as these are often seen as ‘insignificant’ and thus frequently ignored in scholarship. To Rosen-Ayalon, however, the Abbasid, Tulunid and Fatimid periods are, correctly, of ‘utmost importance’ (p.68) in the history of Palestine. The Mediterranean coastal sites of Caesarea, Ascalon and Acre figure prominently in her account, as does the major town of Tiberias located inland on the Sea of Galilee. At all of these places, recent archaeological discoveries have demonstrated that a high level of cultural and economic activity was typical in the main towns of Palestine between 750 and 1100 CE, which was matched by agricultural advances in the countryside such as with sugar cane cultivation and processing. In Chapter 4, Rosen-Ayalon deals with the post-Crusader period, characterised by a rebuilding of a Muslim-Sunni identity after the rule in Palestine of the Shi’ite Fatimids of Egypt (after 969 CE) and the Crusader period (1099-1291 CE). Jerusalem was a major beneficiary of this activity, and many of the major monuments of that town are described in the book (although not always clearly), as is the magnificent, but ruined, White Mosque at Ramlah. The last two chapters deal with the Ottoman period (Chapter 5) and the Armenian potters of Jerusalem (Chapter 6), including the still extant walls of Jerusalem’s Old City and major Ottoman-period developments at the strategic port of Acre. The book ends with references, a glossary and index.

Rosen-Ayalon’s book is packed with much first-hand information and a very useful bibliography, but the book is not without some shortcomings. Any concise account that attempts to deal with an extended historical period, one notable for profound social change, and a reasonably broad geographical area faces problems of material selection and what themes are to be developed. Specifically, ‘Islamic Art and Architecture’ is somewhat disappointing in that it lacks any overall thematic thread and often seems to be just reporting material, as valuable as that may be. There are only occasional attempts to offer any fuller analysis and understanding of the range of material considered. In some instances major issues are raised just to be left hanging, for instance with the fascinating stucco-plaster imagery excavated from the ruins of the enigmatic castle known as ‘Hisham’s Palace’ (Khirbat al-Mafjar) near Jericho (p.50). Rosen-Ayalon has already demonstrated her sophisticated treatment of such issues in early Islam, and to not fully address them in this book sadly ignores the dynamic vitality that characterises contemporary studies in Islamic archaeology and art. In addition, the book often reads somewhat oddly, probably a result of its translation from an original in French. The attention of an English copyreader would have improved the standard of the text considerably. Otherwise, occasional errors have crept into the book, but whether from the original text or owing to translation is not clear. For example, ‘Byzantine conquest’ is stated instead of ‘Islamic conquest’ (p.58), Pella is not on the coastline of the Dead Sea (p.65) but much further north up the Jordan Valley, while the divan (council hall) and baths at Khirbat Mafjar are confusingly mixed in their descriptions (p.48). Inexplicable is the misleading inclusion of the Salah al-Din’s (Saladin, d. 1193) wooden minbar (pulpit) from the Aqsa mosque in the chapter on the Fatimid period (pp.86-87). This minbar was, sadly, destroyed in a fire lit by an Australian in 1969 and not replaced with an identical copy until the beginning of this year (The Australian, 3 February 2007).

Also difficult to understand is Rosen-Ayalon’s inclusion of her treatment of so-called ‘Mafjar Ware’ – a thin cream ceramic decorated with incisions, stamps and by moulds – in the Umayyad chapter (pp.54-56). Not so new studies have compellingly placed Mafjar ware in the subsequent Abbasid period (750-969 CE), for instance a paper by Donald Whitcomb (1988), to which she refers, as well as articles by Jodi Magness (1997) and this writer (Walmsley 2001). By referring to the material as ‘eighth century’, Rosen-Ayalon obfuscates an issue that is so important in correctly identifying settlement profiles in Islamic Palestine, as other Israeli scholars now acknowledge. As Ramlah is considered again in the following chapter (Chapter 3), there was a perfect opportunity to deal with the material there within a more appropriate chronological context.

Regrettably, the book falls somewhat short of modern printing standards, especially given the price. The paperback binding is not strong, and by the time I had finished reading the book the last few pages of my copy had fallen out. In addition, the black and white plate images have reproduced poorly and are sometimes on the small size.

For the reader, then, this book can serve as a useful source of much interesting, yet little-known material on Islamic Palestine, but the information is presented through a number of independent descriptions of sites and periods, not as part of a wider-ranging coherent study. This is something of a shame, but perhaps partly owing to length constraints and translation difficulties. With this book, Rosen-Ayalon set herself a formidable task that is not fully accomplished. However, its shortcoming are perhaps unfairly highlighted owing to rapid improvements in contemporary Islamic archaeology and art, advances that leave us all scrambling to keep up.

Magness, J. 1997 The chronology of Capernaum in the early Islamic period. Journal of the American Oriental Society 117:481–486.