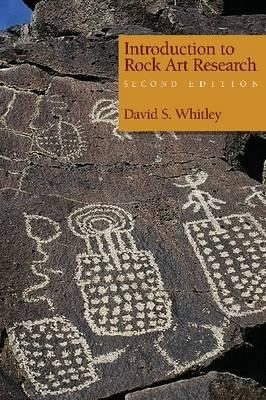 This book is exactly what the title proclaims it to be – an introduction to rock art research – or ‘an introductory text, intended for college students but also useful to professional archaeologists and resource managers who … develop an interest in or need to study or protect rock art sites’ (p.xi). Arising from the need to provide a text book for a short course on rock art research taught by the author at San Carlos University in 2004, the result, this book, was also only ‘intended as a starting point for students and archaeologists interested in rock art research (and not … the final word on how this research must be conducted)’ (p.xi). As such, the book reflects the author’s own experience, research interests, and biases, as Whitley unashamedly points out (p.xi), and draws on a wealth of examples from the area where he has undertaken most of his work, North America. However, any introductory work on rock art research or archaeology in general will necessarily reflect the biases and agendas of its author, but there is still much for the student, archaeologist or cultural heritage professional to learn from this text.

The book is divided into 10 chapters, plus a useful appendix with two examples of recording forms that might be applicable in any rock art recording project, a glossary of the terms used throughout the book, and an extensive reference list providing good coverage of the field, although I would like to have seen more of the Australian literature cited.

The introductory chapter covers definitions of rock art and the techniques used to make it. It is an indication of the relative comprehensiveness of this book that Whitley includes earth figures in his definition of rock art (i.e. intaglios such as the Nazca lines of Peru and geoglyphs or stone arrangements like those found in Australia and northern Chile), although it is unfortunate that they are not considered again. Whitley stresses that rock art research is a subdiscipline of archaeology, but with its own specialised literature, addressing sometimes-different problems and requiring its own analytical techniques.

Chapter Two provides some useful information on rock art fieldwork and how to record sites, differentiating ‘narrative recording’, or written documentation of sites, from ‘graphic documentation’ by such means as photography and tracing. There is a good coverage of some of the latest recording techniques, including digital photography and 3D laser scanning of panels. Whitley stresses the destructive nature of some recording and of archaeology in general, and although he mostly provides a balanced approach, I disagree with his view that direct tracing of paintings is acceptable if they are covered by mineral skins or coatings. The effect of such tracing on these accretions and their dating potential is unknown, and the general precautionary principle followed in the field of conservation is applicable here. A minor quibble I have with Whitley’s lucid explanation of the various recording techniques is the apparent contradiction between his statement that stippling should be avoided in direct tracings of rock art panels, as the accuracy of the traced lines is unclear, and his inclusion of an illustration of a traced panel from his own recording research that features stippling in the legend. In this chapter, Whitley again emphasises that rock art is just one component of a larger archaeological phenomenon, and that the archaeological context of rock art sites should be recorded as this may shed light on the creation of the rock art itself, sentiments with which I strongly agree.

The classification of rock art and the thorny issue of the equation of similar groupings of motifs with cultural-historical styles are considered in Chapter Three. In this chapter, Whitley’s identification of rock art motifs as particular subjects appears as far too certain, such as his interpretation of engraved ‘bighorn sheep’ in the Coso Range of eastern California as dead adult males rather than the pregnant females usually cited. A large body of research has shown that the precise identification of particular rock art figures is problematic, and also that it is not even required for meaningful analysis to follow.

Chapter Four is a comprehensive coverage of dating methods for rock art and the advances that have been made in recent years to provide it with a chronological context. The chapter includes some little-known techniques, such as cosmogenic dating and lead-profile dating. However, the certainty provided by some techniques, such as cation-ration dating, has been overstated, and Whitley’s views on this method stand in stark contrast to the Australian experience, where the controversial results obtained for a rock engraving site in the Olary Province have since been withdrawn.

The next four chapters consider the interpretation of rock art and the various approaches that have been taken. Chapter Five contains ‘a quick refresher on scientific method and some related topics … because the careful use of scientific method provides our best means for studying rock art’ (p.71), and underlines the importance of systematic data collection and analysis compared to the use of anecdotal evidence.

Symbolic and ethnographic interpretation is covered in Chapter Six. A contrast is drawn between informed approaches, where ethnological or ethnographic evidence is used, and formal approaches, which feature outsiders’ interpretations of rock art using quantitative or locational data and other evidence. Although this chapter has a useful and clear explanation of ethnographic approaches to rock art interpretation, it would have benefited from a greater use of Australian examples. This is particularly apparent in the discussion of rock art manufactured to commemorate mythic beings and their actions at certain locales, where parallels with Dreamtime ancestors and the Dreaming tracks they created are all too clear.

A major emphasis of Whitley’s approach is apparent in Chapter Seven, which discusses the neuropsychological (N-P) model, and ‘shamanic’ and ‘shamanistic’ interpretations of rock art. Although numerous examples that illustrate this approach are cited by Whitley throughout the book, this chapter contains the first coherent discussion of the model, drawing the various examples together. I found this chapter quite illuminating and learnt several things that I had not been aware of before, such as the observation that altered states of consciousness involve the generation of iconic (figurative) as well as geometric images in the brain, and that these would be expected in a corpus of rock art if its origin is shamanic (made by shamans) or shamanistic (not made by shamans, but relating to shamanic beliefs and practices). The N-P model has been widely used to interpret rock art in Europe, Siberia, southern Africa and the United States, but has only rarely been applied in Australia. Although I find the model often unnecessarily complex in the interpretation of rock art, it may be fruitful to explore it further as just one explanation rather than a blanket explanation for variation in Australian rock art through time and space.

Chapter Eight lumps other formal approaches to rock art interpretation under the headings ‘Landscape and Distributional Studies’, further subdivided into ‘Archaeoastronomy and Acoustics’, ‘Rock Art as Communication’, and ‘Ethnicity and Territoriality’; ‘Quantitative and Metrical Studies’; ‘Physical Analyses’ and ‘Structuralism and Semiotics’. These subdivisions in a single chapter make the book appear unbalanced in its presentation of the various approaches that have been taken to the interpretation of rock art, especially when compared to the devotion of a whole chapter to just one model, the neuropsychological. This chapter is also dismissive in tone, as illustrated by comments such as ‘we look at formal approaches beyond neuropsychology, focusing on those that are most common, if not always successful’ (p.123). However, this observation appears to be contradicted by some of the examples cited by Whitley, particularly the studies that have addressed questions such as why rock art is placed in one location and not another (e.g. Bradley’s work on the Neolithic rock art of the Atlantic coast), ethnicity and territoriality (e.g. Wilson’s study of Pacific Islands rock art), and how the visibility of rock art panels relates to public versus private sites (e.g. Loubser’s research at Hell’s Canyon, Columbia Plateau). Again, this chapter would have benefited from the inclusion of more Australian studies, if only to refute statements such as ‘formal quantitative and statistical analyses in rock art are the exception rather than the rule’ (p.141), as there is a large body of Australian literature that indicates an increasing use of statistical and multivariate analyses.

The final two chapters (Nine and Ten) deal with management and conservation, and the relationship between archaeology, anthropology and rock art. The first of these chapters comprises a fairly standard text on management planning that might be found in any cultural resource management book, while the final chapter emphasises the need to incorporate the results of rock art research into ‘the interpretation of wider archaeological issues’ (p.163). It also highlights the reciprocal needs of dirt archaeology, rock art research, and anthropology in the form of a continuing priority for world-wide ethnographic research on rock art. These points are well made in Whitley’s final summing up of the exciting research that has been undertaken in rock art research over the last two decades.

Natalie R. Franklin
Review of ‘Introduction to Rock Art Research’ by David S. Whitley
June 2007
64
56-57
Book Reviews
You must be a member to download the attachment ( Login / Sign up )