Review of ‘How a Continent Created a Nation’ by Libby Robin 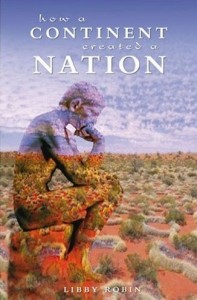 How is a nation created? And to what extent is the construction of a distinctive national identity influenced by the material environment? In How a Continent Created a Nation Libby Robin takes up this intriguing question, building on anthropological theories concerned with understanding how ‘natural’ features of the environment exert agency in a mutually constitutive human-environmental relationship. As Robin says, ‘cultural histories of national identity seldom allow the land a role as a partner in constructing the nation, yet the partnership between cultural identity and natural possibilities must underpin the search for sustainability’(p.5). Australia provides a useful context in which to examine these issues, having an environment so far removed, both geographically and experientially, from the ‘Mother Country’ of its European settlers.

Though fundamentally historical, Robin’s text is neither linear nor chronological, ranging – at times somewhat quixotically – across a wide-range of topics and periods. The chapters are loosely organised under broad themes, but are really more of a collage. The text sets the scene by observing that, at the beginning, European settlers saw Australia as a terra nullius into which their ‘home’ economy and society was to be extended, and they surveyed and evaluated it largely in relation to more familiar landscapes. It seemed at first a rather poor relation, with its unreliable climate and water supplies and its recalcitrant soils. The peculiar fauna and flora were deemed to be far less useful than those the settlers imported, and the strangeness of the environment dominated representations of the new nation for some time. Much energy was focused on the ongoing and not always successful ‘battle’ to subdue its wild and hostile ‘nature’ and establish a European vision of productivity. As farmers coaxed and coerced the fragile soils into production, a vision of ‘growing things’ became integral to early settlement and remained central in an economy that, until relatively recently, depended on just a few primary industries. Robin describes how the idea of ‘growing’ a nation was carried through in schools, with a strong emphasis on gardening, tree planting and ‘improving’ the landscape, and how the particularity of Australia’s flora led to an enthusiastic debate about whether the wattle should be the national flower or whether other flowers, such as the waratah, should represent the nation.

Although they were seen as ‘primitive’ and ‘backward’, the very oddness of the local flora and fauna was intriguing to European scientists, posing a stimulating challenge to Linnaean categories. In the 1700s, for example, there was a lengthy ‘international conundrum’ about the platypus and its reproductive processes, then in the 1920s, much discussion about its postulated ‘sixth sense’. The work of natural historians encouraged a new respect for the uniqueness of Australia’s plants and animals, and the platypus and other ‘oddities’ appeared as ambassadors for the nation in the world’s zoos.

In the third chapter, Robin explores the history of the wool industry. This was fostered as patriotic project, building both the British and Australian economies at first, and then in a post-war era, providing relative economic independence for Australia and funding for large ‘nation-building’ infrastructure developments, such as the Snowy Mountain irrigation scheme. For some time, even when minerals provided more income, the nation was seen as being reliant on wool. In consequence, the social and environmental costs of its production were largely ignored, although from the 1930s onwards increasing measures had to be taken to ‘improve’ grasslands with introduced grasses which rapidly over-ran native species and did little to prevent land degradation.

In Chapter 4, Robin explores the notion of ‘collecting the nation’, describing the establishment of museums around the country and the debates about what a museum should be. Australia’s early museums reflected the particular interests of the philanthropists who supported this ‘practical patriotism’, and the things that fascinated the nation most: wool, minerals and strange fauna. With the view that science was of national importance, museums also housed research that might prove economically helpful. Though the focus was mainly on natural history, there was some ethnographic collection too, with leadership from early anthropologists, Norman Tindale and Alfred Radcliffe-Brown. The post-war period encouraged museums to display war relics, and the collection of cultural artefacts grew in importance during the latter part of the twentieth century. New notions of cultural heritage led to the formation of the Australian Heritage Commission, and the AustralianNationalMuseum was thus established to exhibit both natural and cultural history.

Chapter 5 wanders out of the museum and into the desert, to consider the importance of Australia’s arid areas in the national imagination. Deserts, Robin observes, stand apart as empty places where people don’t live, and in the nineteenth century they formed ‘the backdrop to heroic explorations and bitter pastoral disappointment’ (p.100), encouraging the population to cling to the coastlines and face outwards. In some areas, though, they proved essential to the nation’s wealth, and there were major expeditions in search of gold. The 1984 Horn expedition to Central Australia didn’t find any, but gathered an extraordinary collection of biological and ethnological material. As Robin notes, ‘while the state sought riches, science sought data’ (p.101), engendering a growing respect for ‘desert knowledge’. In the 1920s, the relative ease of flight opened up the great inland, and the ‘dead heart’ became a more enticing ‘red centre’. Ideas about irrigating the desert produced ambitious plans to turn the rivers inland, which are still held up by some as a desirable national vision. There was a florescence of arid zone science, much still directed at developing sheep pastures, but also reflecting the increasing ecological concerns which led to the establishment of Australia’s national parks.

Similar elements are evident in the sixth chapter’s focus on ‘the empty north’, whose ‘wild lands’ were the scene of many failed schemes in the early days of settlement. At that time, the overland telegraph provided the only north-south pathway, and farms remained dependent on cheap (and largely unacknowledged) Aboriginal labour. Even in the 1940s, Robin remarks, the tropics were seen as an unconquered ‘wilderness’ area, constituting a financial burden on the nation. Since then the northern population has expanded and new development schemes are underway, creating a ten-fold increase in water use and widespread land clearing.

An account of the north’s environmental problems leads into a chapter concerned with the broader ecological issues that Australia now faces, bringing home to its inhabitants a realisation that European forms of development and production cannot be sustained on a continent with such variability in climate and rainfall. Contemporary environmental sciences build on the earlier practical emphasis on biology and agriculture, giving a strongly ‘applied’ brief to the nation’s scientific activities. There has been a gradual acceptance of the need to include the social sciences in environmental research, and this has been further encouraged by the rise of a vocal green movement. Although ‘the environment’ remains largely separate from economic activities, both intellectually and administratively, an increasingly sophisticated vision of the nation and the continent is emerging, finding synergies between Indigenous concepts of ‘country’ that gives life, and ideas about biodiversity and cultural heritage.

In the final section Robin pulls together some of the core themes of the book: how, though various forms of engagement, Australia’s unique landscapes, flora and fauna have molded the nation. She observes that the time has come to work with, rather than against, this agency, eschewing imported ideas about ‘forcing’ productivity from fragile ecosystems, and she notes the emergence of new conservationist ‘battlers’ who challenge the scientific and economic dominance of primary production, seeking to push the nation in a more ecologically and socially sustainable direction. As she says, ‘finding ‘home’ in Australia has meant coming to terms with Australian nature with all its richness, and its limitations and exceptionalism’ (p.205).

How a Continent Created a Nation makes a good case for a more empathetic relationship between Australian society and the biological landscapes it inhabits. It is apparent that, for most of the last 200 years, ambivalence about local flora and fauna has given impetus to a damaging struggle to establish quite unsuitable non-native plants and animals in their place. There is an implicit commentary here too about attitudes to the original human inhabitants of the continent, and the parallel need for reconciliation with (and appreciation of) the cultural landscapes that European settlement has subsumed. These too have been influential, encouraging the expression of affective concerns about being ‘at home’ in the land, and working in partnership with it. The book could have made this subtle commentary more explicit, but it comes through clearly enough.

The emphasis on relations with ‘nature’ allows Robin to weave a detailed picture from a collection of apparently disparate but actually entangled strands, so that it is possible to see the relationships between war memorials and wattle flowers, unclassifiable people and animals, and fetishised anxieties about the ‘purity’ of merino wool. The style of the book is engaging, persuading the reader to be forgiving of its necessary but sometimes discombobulating chronological and topical zigzags. In the end, like a Rolf Harris painting, it reveals a whole picture that makes sense, providing some original and useful insights into the large and complex relationship between a new society and an old continent, and the way that material environments act upon nations and identities.