Review of ‘Hominid Adaptations and Extinctions’ by David W. Cameron 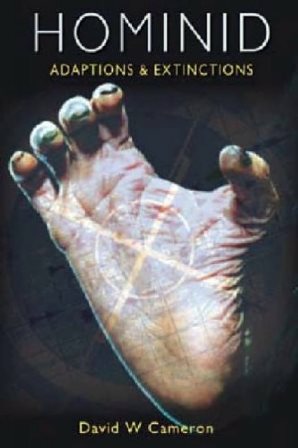 As archaeologists we tend to concentrate on human cultures in the foreground, leaving the biological context dim and blurred in the background. We need to shift our focus if we are ever to hope to understand the biological evolution of the physiological, morphological and behavioural capacities which make those learned traditional and innovative patterns of behaviour we call cultures possible; and begin to apprehend the mix of biological and cultural in the further development of those capacities through manifold hominin genera and species. The cultural past of the species Homo sapiens is based on the biological capacities of its hominin forebears. We need to appreciate our heritage as terrestrial vertebrates, with external sense organs monitoring our surroundings, and a central nervous system sunk within the protection of an internal structural and locomotor framework; as mammals with highly efficient physiological mechanisms maintaining a steady chemical environment and temperature for the functioning of muscles and nervous systems, placental gestation, and young suckled by the mother, young who do not arrive with their behaviour completely genetically programmed, but a need succour as they learn; and as primates whose arboreal background involves emphasis on visual rather than olfactory senses, and learned coordination of vision and movement.

As members of the hominoid super-family, the hominid family, and the hominin tribe we belong to taxa which have bushed out into a prolific diversity of genera, and species, and spread into a great variety of environments, moving between Africa and Eurasia, over the relatively short (20Ma) span of the Neogene. Although our hominid forebears showed relatively little specialisation (mainly of teeth, jaws and jaw musculature) to tie each taxon to one environment only, that seems to have been sufficient to lead to extinctions as the Himalayan-Tibetan massif rose and environments changed. Very few taxa survived the massive fluctuations of the Pleistocene, and those which not only survived but proliferated were those which showed least specialisation and retained most primitive generality, adding a multipurpose capacity to handle and adapt objects, artefacts, concepts and society.

Cameron’s solid little book is a very condensed summary of the specialised field of primate systematics, but it provides for the non-specialist a very effective account of how the data are marshalled and handled to elucidate hominoid taxonomy, and throw light on the relationship of structure and function to environments and distributions.

If one compares the position in the twenty-first century with that half a century ago, when LeGros Clark wrote on the fossil background to human evolution, the available fossil data is immensely richer. That does not make the task easier, but harder. We must surely be approaching the point of maximum complexity, after which situations will begin to clarify. I hope so. But I found it wholly admirable that Cameron does not try to solve the insoluble, but is willing to admit that quite often we do not yet have certitude. There are some taxonomic decisions he explicitly leaves in a suspense account. We don’t know yet. Archaeologists also should learn that sometimes it is allowable to conclude that several possibilities remain open – that we don’t know!

There are some annoying minor errors, omissions and commissions which closer editorial scrutiny should have removed. The phrase ‘as such’ is constantly misused. ‘Above-branch’ and ‘below-branch’ locomotion appear to be reversed on p.151 (compare with p.149 and p.133). Items stray into the wrong columns in several of the tables showing tentative classifications – the Homininae have shifted out of the ‘sub-family’ column in Table 1.1. The second half of Table 7.6 has columns for sub-family, tribe, genus, and species; but the first half of the table, on the previous page, has lost the ‘tribes’ column, and the tribes Kenyapithecini, Sivapithecini and Pongini are distributed between the columns for sub-family and genus. Several technical terms explained in boxes appear also, helpfully, in the glossary, but not all.

Archaeologists could learn a great deal from this modest but authoritative volume, not only from its very considerable substantive content, but also from its methodological rigor, and refusal to affirm a conclusion as incontrovertible prematurely.

Sylvia Hallam
Review of ‘Hominid Adaptations and Extinctions’ by David W. Cameron
June 2006
62
50-51
Book Reviews
You must be a member to download the attachment ( Login / Sign up )