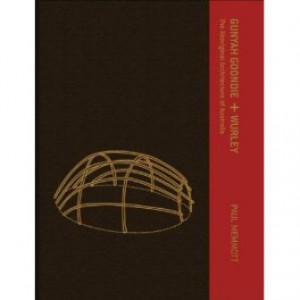 The perception and pervasive myth that Indigenous Australia was a land without architecture, without permanent, significant houses and settlements, and that Indigenous people were nomadic is squarely challenged in Paul Memmott’s book. His central subject is Aboriginal ‘ethno-architecture’ as practised prior to colonisation and throughout and beyond the contact period. Memmott’s examination of the complexity and range of such practices is important; indeed, this book fills a large gap (and need) in our documented knowledge and is a tangible response to the question of terra nullius. Most significantly, the book sees and recognises Indigenous architecture as the built expression of complex and changing social structures, reflections of, and inter-relatedness to, kinship groups and elaborate social rules and structures as well as the response to resources, lifestyle and climate.

Memmott has been documenting regional architectural styles for over 30 years and this book is a collation of some 20 publications. The result is what appears to be an encyclopaedia of Indigenous architectural practices. However, this book is more of a starting point than a completed catalogue. This is a significant attempt to begin to collate and document a more definitive resource on the subject. The audience is the lay reader and the academic (p.xiv) – not a book written for archaeologists – however, the systematic documentation of many types of regional Indigenous architecture is both informative and useful. The architectural ‘view’ of the built environment has the potential to inform our archaeological perspectives. In addition, the extensive collation of photographs, paintings, magazine and journal articles and use of Indigenous voices is both impressive and informative.

Specific themes addressed in the book include campsite domiciliary behaviour, travelling between campsites as a response to seasonal changes, semi-sedentary villages, spatial organisation of campsites and the diffusion and influence of design types across regions. These themes are explored region-by-region using case studies. For example, Chapter 4 examines the north east rainforest and how the tropical wet seasons result in sedentary village architecture, while Chapter 9 looks at the spinifex houses of the Western Desert. ‘Boxes’ are also used to provide additional case studies within each chapter. These are valuable but the layout makes reading of the main text somewhat disjointed.

This book also examines outstation architecture from the 1970s, with the collaborative architectural projects between Aboriginal groups and non-Aboriginal architects, as well as contemporary architecture by Indigenous architects with Western qualifications and training.

While some of Memmott’s analyses of the use of space by dogs is refreshingly outside mainstream thinking (with the exception of Colin Pardoe), his use of primarily male anthropological sources has biased some of his interpretations. For example, his discussion of the Alyawarr’s use of campsite space includes an innovative and fascinating discussion on men’s, women’s and dog’s space. However, there is more depth committed to the role of dog’s space than to women’s space and this is indicative of a gender bias within the book as a whole. In the chapter, women’s use of space is addressed in a rather superficial way (p.40):

Women’s ritual is often planned and organised from within women’s domiciliary spaces. Women also, of course, go about their daily chores of food preparation, cooking and childcare in these spaces.

A considered analysis of women’s use of space would have strengthened this volume, and is an obvious area for future research.

Gunyah, Goondie and Wurley is impressively hard-bound and its weight and feel is, in some sense, imposing and authoritative. As it is written by an architect, the book has an aesthetic property, which cannot be ignored. The book makes a substantive contribution to our knowledge of Aboriginal architecture. It can be difficult to read, but it is pleasure to peruse.

Cherrie de Leiuen
Review of 'Gunyah, Goondie and Wurley: The Aboriginal Architecture of Australia' by Paul Memmott
June 2010
70
73-74
Book Reviews
You must be a member to download the attachment ( Login / Sign up )