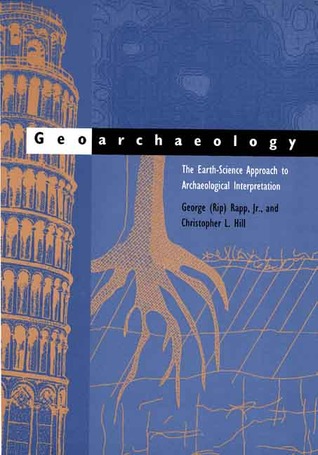 In Geoarchaeology: The Earth Science Approach to Archaeological Interpretation, by George (Rip) Rapp, Jr. and Christopher L. Hill, I hoped to find a concise overview of the theoretical and practical linkages between the two great historical sciences, archaeology and geology. On paper, Geoarchaeology promises to cover most, if not all, of the pertinent material. Unfortunately, from the outset Geoarchaeology disappoints.

Chapter 1’s ‘Theoretical and historical overview’ provides us with the requisite definitions of ‘geoarchaeology’ and ‘artifact’, and places the subdiscipline in a historical perspective. Some readers will find the digressions on nomenclature and usage somewhat tedious and superfluous. For example, in the earlier ‘Preface’, (p.xii) we heard that the modifier ‘archeological’ ought to be truncated to bring it more in line with usage such as ‘stratigraphic’ and ‘geomorphic’, which have lost their adjectival ‘al’ ending in all but the most pedantic writing. However the authors reassure us that they are to retain ‘archaeological’, at the request of reviewers and other colleagues. Still, the uncomfortable ‘archaeologic’ finds its way into Figure 2.4, an overlooked remainder, perhaps, of a pre-review draught. In the end, we could just as well have done without their digression on adjectives, if the result was the status quo – it only serves to alert the reader to the authors’ own brand of pedantry, and to concentrate criticism on their presentation. Indeed, leaving this digression in works to the authors’ disfavour. Because in spite of Rapp and Hill’s avowed sensitivity to language, and especially to language that is not de rigurur, it was not long before I encountered what amounts to a stylistic about-face. They use the term ‘formational processes’, complete with the adjectival ending, on page 50. This is especially curious since most writers are quite comfortable to drop the ‘al’ ending in ‘site formation processes’. Indeed, the authors repeatedly disregard their own prescription to leave off the ‘al’, and even insert it where most would not. This results in terms with which I am unfamiliar: ‘interpretational value’ (p.48) and ‘interpretational perspective’ (p.50). Whatever happened to the more common ‘interpretive’ (or even the more traditional ‘interpretative’, in use in British English)? One is at pains to guess.

Chapter 1 does provide a history of the melding of archaeology and geology, which students will find interesting. And notwithstanding my discomfort with the authors’ uneven lexical choices, after Chapter 1 I was looking forward to ‘Sediments and soils and the creation of the archaeological record’. I hoped it would prove to be the concise description of sediments and sedimentology that I have always sought in the literature, to recommend to undergraduates wishing to gain a quick overview of this important area. Unfortunately, Chapter 2 is not much more than a litany of terms, and brief descriptions of processes and analytical strategies. This chapter will be useful as a catalogue of the range of processes in the lithosphere, however some students might find it less useful as a learning tool, because of its superficiality. For, in addition to the shortcomings of content, Chapter 2 and subsequent chapters are at times naive, in places maddeningly superficial, often repetitive, and poorly structured. They contain much poorly edited prose and a number of unhelpful diagrams. These mechanical shortcomings are exemplified in the discussion of Michael Schiffer’s ‘systemic context’ (p.52) which the authors employ, as a structuring device in their discussion of site formation. Rapp and Hill define the systemic context as ‘all the processes of human behavior or transformational activity that occur before the site is left unoccupied by people’. I was at this point tempted to ask about the large number of places that have been continuously occupied for long periods, such as London, England. Are the activities carried out there precluded from consideration as ‘systemic’ because they were never unoccupied? And in Chapter 3 ‘Contexts of archaeological record formation’, we are presented with this howler: ‘Wind can bury artifact arrangements associated with the behavioral occupational context of a site under a dune…’ (p.54).

Chapter 4, ‘Paleoenvironmental reconstructions: humans, climates, and ancient landscapes’, is more of the same. To be fair, these early chapters required expertise. They cover a lot of ground, and to have accomplished it with more aplomb would have required not only the authoritative synthesis of an enormous quantity of scholarship with a bearing on archaeological site formation and interpretation, but also a great deal more space. This subject needs a compendium. With that in mind, if Geoarchaeology is not comprehensive or authoritative it is forgivable. I am, however, less charitable with the presentation. When I was not being told the same thing four times on the same page, I found myself going back over passages again and again. This is often a sign of problems with the prose. And, although spelling mistakes are relatively rare in this work, such errors leave an already jaded reader with a worse impression of the authors’ thoroughness. I encountered ‘unabraided’ for ‘unabraded’ (p.42), and ‘bedding plains’ for ‘bedding planes’ (p.48).

The authors are careful to indicate to the reader that they are sensitive to language and its subtleties. I applaud the authors’ use of the non-gendered ‘human’ throughout. I was nevertheless bemused by some of their lexical choices. For example, I find it interesting that they still employ ‘prehistoric’ when referring to aspects of the human past. They do, after all, use ‘geological history’ and ‘evolutionary history’ in this book, neither of which have a recent documentary component, as human history has. I doubt, however, that Rapp and Hill would ever think of using the term ‘geological prehistory’. Why then do these and other authors still feel compelled to use ‘prehistory’ when referring to the human past, when indigenous people the world over have come to view its use as disparaging and derogatory?

I do not wish to convey the impression that this book is without merit. Chapter 5’s ‘Raw materials and resources’ is methodical, authoritative, and concise. It would be hard to escape the conclusion that this chapter was not written by the same author as the rest of the book. Nevertheless, it represents but momentary relief from the imprecise and repetitive prose of the earlier chapters. And, on form, Chapter 6’s ‘Provenance studies’ and Chapter 7’s ‘Estimating age in the archaeological record’ are occasionally informative, but too vague, in some places, to help teach a beginner.

I have already mentioned that Geoarchaeology is occasionally naive. An example is warranted. In a work that attempts to look at archaeological interpretation from the perspective of site formation processes, including taphonomy, I wnot impressed by the authors’ taphonomic savvy. which is at times wholly uncritical. For example, after an unhelpful and sketchy overview of site formation processes and taphonomy in caves. the authors demonstrate a degree of gullibility when they trot out the now thoroughly discredited claims of purposefully cached cave bear remains from Drachenloch Cave – those that gave rise to the myth of the Middle Palaeolithic cave bear cult. Rapp and Hill accept these claims in spite of the decades-old work. And they give further evidence of their naivete. By using this example, I hope I can avoid accusations of axe-grinding when I point out that the authors unproblematically cite the claims for purposeful burial, with flowers, of a Neanderthal at Shanidar Cave (Solecki 1971). Notwithstanding the substantial evidence for natural burial at that site, no geoarchaeologist worth their salt could condone the unsystematic way in which the Shanidar sediment samples were collected. Those samples were in no way ‘associated’ with the skeletal material (Solecki 1971:247). Nor could a serious geoarchaeologist accept the claim that plant macrofossils discovered in those samples were necessarily unique in the cave, or that they could not have been preserved naturally – given the abundant evidence for natural rockfall. Instantaneous deposition, such as a rockfall, is able to preserve anything beneath it. This is quite clear from Madame Leroi-Gourhan’s(1975) sediment analysis. In addition to the plant macrofossils of which much has been made, she found butterfly wing parts, charcoal and wood. To my knowledge no one has yet suggested that these findings represented a butterfly burial, or that the charcoal and wood in the substrate are in any way related to the burial. Why should anyone accept the assertion that the plant macrofossils were part and parcel of a burial ritual? I find it hard to imagine that the authors would not accept any malarky fed to them in the guise of ‘earth science’.

Geoorchaeology is the only work I know of that attempts to do it all in one volume. Perhaps that is its downfall. It may have been too much to ask one or two specialists to put such a work together. I will continue to recommend Archaeological sediments in context, by Julie K. Stein and William R. Farrand, in spite of its age, because it does a much better job of covering the major depositional contexts and their importance to archaeological interpretation. In addition, in my teaching I will be forced, still, to make up for the absence of a good, comprehensive treatment of geoarchaeology with additional topical syntheses from the literature.

Gargett, R.H.
Review of ‘Geoarchaeology: the Earth-Science Approach to Archaeological Interpretation’ by G.R. Rapp, Jr. and Christopher L. Hill
June 1999
48
62-64
Book Reviews
Download
You must be a member to download the attachment ( Login / Sign up )