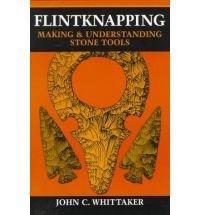 Whittaker is an Associate Professor of anthropology at Grinnell College, USA. He has been knapping for twenty years and credits Francois Bordes as his initial mentor. He has also knapped with Harold Dibble, Mark Newcomer and Jacques Pelegrin (p.4). I first heard about Flintknapping on the ‘Knapper discussion group’ (for subscription details, contact stiletto@iastate.edu). It appeared to be hugely popular amongst the subscribers, some of whom are professional archaeologists, others interested only in the craft of knapping.

Whittaker’s book is ‘aimed at students of archaeology and prehistoric technology as well as interested non-archaeologists’ (p.2). Interestingly, Whittaker sees this work as an autobiography (p.5), and he has illustrated some of his own knapped work: from the very first points he produced (one of which incidentally nearly severed one of his fingers), to some of his latest pieces. Whittaker aims to provide the practical details required to master knapping techniques. To that end the exercises are well presented and illustrated.

Flintknapping includes chapters on the basic principles and history of knapping, raw materials, safety, hard hammer percussion, pressure flaking, soft hammer percussion and bifaces, blades and fluting, using stone tools, and the archaeological analysis of stone tools. Whittaker has also included as ection on resources for knappers, such as commercial sources of knapping materials (including casting labs), newsletters and journals, and events (such as knap-ins’ – very popular according to discussions on the ‘Knapper discussion group’). The writing is easy for a non-professional to follow, but contains enough detail, and provides a comprehensive bibliography for those readers who might wish to follow up on ideas.

I want to discuss two issues here. The first and most important is the presentation of Australian Aboriginal stone technology as ‘simple’ (e.g. p.51, 85). This view is supported by several references, one of which is (incredibly) over 60 years old (Hambly 193l), and another reference to New Guinea, not Australia (White 1968). I believe that there are three important points to make. Firstly, there is really not much information published internationally on Australian technology, especially recently. This is an issue for the Australian archaeological community to address. The other two points may be related: the use of the term ‘simple’ to mean expedient, although this is not explicit in Whittaker’s book, and the tendency of those archaeologists who investigate points and for bifaces to see any other technological type as ‘simple’. I believe both these views are implicit in Whittaker’s work.

The second issue I want to discuss is Whittaker’s tendency to describe knappers as men. Added to this, he consistently uses the term ‘man-made’, to mean something produced by humans. Whittaker presents a balanced view of the issue of gender imbalance towards the very end of his book (p.297-8), but this is after the reader has encountered examples where prehistoric knappers are described as ‘he’ (e.g.p.215). I believe that, given the audience of this book, who in Whittaker’s own words maybe ‘…almost completely dominated by men…’ (p.297), the discussion of gender bias might have been better placed towards the beginning of the book. I think it important to emphasise to professionals and non-professionals alike, that knapping is not exclusively a male activity. Women can, and do, knap.

Given that this book is partially directed at a non-archaeological public, Whittaker provides a good discussion of ethical considerations when collecting stone for knapping. He also lambasts the generally popular ‘research’ on the fringe of archaeology (e.g. space gods establishing the civilisations of the New World, etc.) (p.50).

In addition to my substantive criticisms, there are a number of annoying editorial slips, despite this being a second edition. For example, there is consistently poor placement of figures within the text. There are several spelling mistakes, the most spectacular of which is the misspelling of eraillure twice on two pages (p.15and 16). Inconsistent use of the drawing convention causes some confusion (in the US with the platform at the bottom of the drawing), despite Whittaker’s explanation for this (p.14). Some diagrams are difficult to follow without some knowledge (e.g. 6.4 1-6.47).

Despite the criticisms I have of Flintknapping, I found it both enjoyable and instructive. It will be a very useful source book.

Hambly, W.D.1931 Types of ‘Tronattas’ or stone implements used by the Aborigines of Tasmania. American Anthropologist 33: 88-91.

MacDonald, K.
Review of ‘Flintknapping: Making and using stone tolls’ by John C. Whittaker
June 1997
44
76
Book Reviews
Download
You must be a member to download the attachment ( Login / Sign up )