Review of ‘First Farmers: The Origins of Agricultural Societies’ by Peter Bellwood. 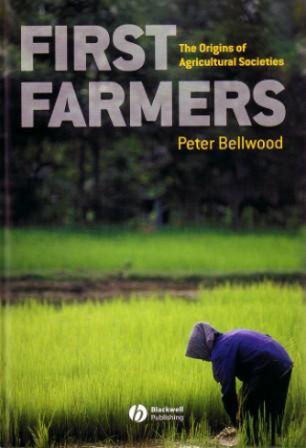 Over the last decade there have been several pan-regional reviews of agricultural origins, but few authors have attempted a global overview (cf. Smith 1995). In this comparative examination of the development and spread of agricultural societies in different parts of the globe, Peter Bellwood demonstrates an often encyclopaedic knowledge of his subject presented in regional and thematic reviews. He marshals archaeological, linguistic and human biological evidence in each region of the world where farming is currently thought to have originated independently. These lines of evidence are assembled to put flesh on the bones of the ‘early farming dispersal hypothesis’, essentially an updated version of the ‘farming/language dispersal hypothesis’. As succinctly stated (and discussed in Chapter 1):

The early farming dispersal hypothesis postulates that the spreads of early farming lifestyles were often correlated with prehistoric episodes of human population and language dispersal from agricultural homelands (p.2, original emphasis). From this perspective, agricultural colonists expanded through demic expansion in a ‘wave of advance’ (Ammerman and Cavalli-Sforza 1984) from an agricultural homeland. Through demographic expansion, farming populations spread outwards and, to varying degrees, their material culture, languages and genes replaced those of non-agricultural populations in newly colonised areas. These ideas came to the fore to understand distributions of Neolithic material culture, Indo-European languages and genes across Europe (Renfrew 1987), but are being increasingly applied in disparate parts of the globe, such as the spread of Austronesian language-speakers across Indo-Malaysia (e.g. Bellwood 1997:201–254). In contrast, others attribute greater historical efficacy to social interaction, admixture and transformation to understand present and past distributions of material culture, languages and genes (e.g. Richards et al. 2003; Thomas 1996).

The phylogeny (demic diffusion) versus reticulation (social interaction) dichotomy sets the conceptual framework for Bellwood’s interpretation of early agricultural development and subsequent spread in different regions of the world. The dichotomy is purposefully heuristic. Each pole is acknowledged as an extreme that is unlikely to have occurred in the past, except during the settlement of uninhabited places (p.273).

‘Operational Considerations’ (Chapter 2) include an outline of the comparative method adopted, definitions of agriculture, its significance to human history, reasons for its development and how it may have been transmitted to non-agricultural groups. Following a rather selective ethnographic review, hunter-gatherers are considered to have only rarely adopted agriculture. This conclusion provides crucial support to the early farming hypothesis because, if it holds, the diffusion of agriculture and associated material cultures in the past was largely due to demic expansion.

Successive chapters (Chapters 3–8) present regional overviews for the origin and spread of agricultural societies. Most regional overviews are comprehensive and have a reference-like quality, although in places they may be too dense for the non-specialist and assume a degree of background knowledge. More significant are biases, particularly Eurasian, in the level of discussion given to each region of independent agricultural development. The origins of agriculture in Southwest Asia (Chapter 3, 23pp.), with subsequent spread across Europe and Asia (Chapter 4, 30pp.), and origins in East Asia (Chapter 6, 17pp.), with subsequent spread across Southeast Asia and Oceania (Chapter 7, 14pp.), are given extended discussion, as are, by virtue of their diffuseness, the multiple claimed centres of independent origin in the Americas (Chapter 8, 34pp.). In contrast, Africa (Chapter 5, 14pp.) and New Guinea (Chapter 7, 4pp.) have only cursory treatments. Although I acknowledge my own New Guinean bias, greater discussion is merited because ‘New Guinea has been a powerhouse in the prehistory of the western Pacific’ (p.145). However, New Guinea’s contribution to the long-term history of the Pacific is less a direct result of demic diffusion and more a product of social interaction within Near Oceania prior to mid-Holocene migrations beyond (a point returned to below).

In the remaining chapters of the book, Bellwood’s comparative method and line of argument become more explicit. Chapter 9 provides clear and concise overviews of key linguistic concepts and lines of historical interpretation. Of most relevance are discussions on the relative roles of phylogeny and reticulation in the histories of language family development. In Chapter 10, the distribution and phylogenies of major language families are compared to the archaeological evidence for agricultural homelands and dispersals. For some language families the discussions are a bit too brief and conclusions asserted rather than demonstrated. For most major language families, Bellwood argues for cultural and linguistic correlations, although the concluding section of the chapter is surprisingly more qualified.

In Chapter 11, human biology is added as another comparative layer. Of most interest are accessible and even- handed reviews of recent debates on human genetic data from Southweast Asia and Europe (pp.256–262) and Southeast Asia and Oceania (pp.265–271). Bellwood presents a ‘middle-of-the- road’ conclusion of demic diffusion with ‘constant processes of population mixing, sex-specific differential migration, and successive bottlenecks’ (p.272).

The concluding chapter (Chapter 12) draws the disparate lines of cultural, linguistic and genetic data together. Bellwood proposes zonal (spatial) and staged (temporal) models for agricultural origin and spread. The degree of correlation among cultural, linguistic and genetic lines of evidence for any locale is a product of ‘dispersal-based pulsation at intervals, with reticulation in the periods (often extremely long periods) between’ (p.278). Unsurprisingly, given the nature of the evidence, ‘the final conclusion should be that language families and early agricultural economies spread through hunter-gatherer landscapes in prehistory essentially through population growth and dispersal, but with admixture’ (p.278). Demic diffusion is the dominant mechanism, with some allowance for reticulation during periods of standstill and ‘settling-in’.

My reservations with the book stem from a different conceptual stance and derive from my own research in the New Guinea region. Firstly, the division between farmer and hunter- gatherer is too stark, a stance made explicit when Bellwood ponders why ‘particular groups of prehistoric foragers crossed the Rubicon into systematic agriculture’ (p.25). Although a comparative ethnographic review appears to indicate that few groups occupy transitional situations (pp.25-28), the variety of traditional lifestyles in New Guinea and their classificatory ambiguity would seem to suggest otherwise (Roscoe 2002; Specht 2003; Terrell 2002). Early agricultural practices in New Guinea were probably not ‘all-or-nothing’ adoptions, but were grafted onto pre-existing practices in diverse ways in different locales (Denham 2005). Similar ambiguities certainly exist elsewhere.

Secondly, Bellwood acknowledges that the scale of comparative method adopted changes perspective (p.10), but then goes on to state that: ‘In such continental-scale situations, the irregularities of small-scale reality become “ironed-out”’ (p.10). Such a general and smoothed version of human history fails to take account of how small-scale practices relate to larger-scale interpretations. If we are unable to take account of localised variability in our continental-scale perspectives, then upon what are the latter based? For example, there are several cited archaeological, linguistic and genetic anomalies that do not accord with the ‘express train to Polynesia’ (Diamond 1988) version of Austronesian migration across Southeast Asia and Oceania. These anomalies seem to suggest extensive reticulation (over a presumably long time period) in Eastern Indonesia or Near Oceania, which yielded distinctive agricultural practices, linguistic characteristics and genetic markers in these regions, some of which were transferred to areas subsequently colonised. Although the effects of reticulation for New Guinea are alluded to, they are treated as asides and are subsumed within the larger demic expansion model. In such cases, more detail and balance are needed because it remains to be seen whether such isolates threaten the larger model (cf. Renfrew paraphrased in Schouse 2001:989).

Unlike many books, Bellwood’s represents the cogent unfolding of a complex argument that draws on disparate types of information. The regional reviews of the archaeological evidence for early agriculture and its spread are, in the main, invaluable points of reference. Similarly, Chapters 9 and 11 are excellent starting points for archaeologists seeking to gain a foothold on seemingly impenetrable debates suffused with linguistic and genetic information, respectively. It is certainly the most scholarly, single-authored review of global agricultural origins on the market.

Ammerman, A.J. and L.L. Cavalli-Sforza 1984 The Neolithic Transition and the Genetics of Populations in Europe. Princeton: Princeton University Press.

Thomas, J. 1996 The cultural context of the first use of domesticates in continental Central and Northwest Europe. In D.R. Harris (ed.), The Origins and Spread of Agriculture and Pastoralism in Eurasia, pp.310–322.London: University College London Press.

Tim Denham
Review of ‘First Farmers: The Origins of Agricultural Societies’ by Peter Bellwood.
June 2006
63
49-50
Book Reviews
You must be a member to download the attachment ( Login / Sign up )