Review of ‘Faunal Extinction in an Island Society: Pygmy Hippopotamus Hunters of Cyprus’ by Alan H. Simmons and Associates 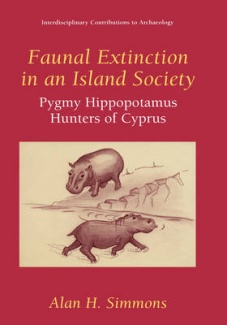 aunal Extinction in an Island Society: Pygmy Hippopotamus Hunters of Cyprus by Alan H. Simmons and Associates. Kluwer Academic/ Plenum Publishers, New York, 1999, xxi+381 pp., ISBN 0 306 46088 2 (hbk).
Akrotiri Aetokremnos (‘Vulture Cliff”), the only late Pleistocene archaeological site known from Cyprus – is perched precipitously 40m above the Mediterranean Sea. In best Enid Blyton-style, a small boy was involved in its discovery. In 1961, school-boy David Nixon, the son of a British serviceman on the nearby RAF airbase, was exploring the cliffs around Akrotiri peninsula on the southern coast of Cyprus when he came across an area where chipped stone artefacts and the bones of the extinct Cypriot pygmy hippopotamus (Phanourios minutus) were eroding out. Although Nixon dutifully reported ‘Site E’ to the Cypriot Department of Antiquities, it did not attract much interest as it lacked ceramics or architectural remains. Incentive officially to investigate Akrotiri Aetokremnos increased when marine shells associated with the deposit returned a radiocarbon date of 11,400 BP, several thousand years earlier than any other known site on Cyprus. One further obstacle had to be overcome before any excavations could take place: the rock shelter is on a British military base and it soon became apparent that only British or American archaeologists would get clearance to dig. In 1987 Alan Simmons took on the job. This beautifully written monograph presents his findings.

Until recently, the conventional picture of Cypriot prehistory began with Neolithic settlement of the island at ~9000 BP. With a date of 11,400 BP, Akrotiri Aetokremnos presented a direct challenge to this chronology. It was also the only site on Cyprus with an apparent association of people and extinct fauna Both issues were controversial and the need to argue the case in detail dominates this monograph. Simmons presents a thorough but conventional site report: background chapters on environmental context and the early prehistory of Cyprus and other Mediterranean islands set the scene. Subsequent chapters describe the site and excavation methods, stratigraphy and sedimentary history, cultural features, chipped stone artefacts, fauna) assemblages, and radiocarbon chronology. The concluding chapters return to the regional context of Akrotiri Aetokremnos and discuss the place of the site in the initial colonisation of Cyprus and extinction of endemic island fauna such as the pygmy hippopotamus.

Questions about the dating of the site were quickly resolved. Simmons obtained 31 conventional radiocarbon and AMS dates on burnt Phanourios bone, bone apatite, bone collagen, charcoal and marine shell. These range in age from ~8-12 ka BP with a weighted average age of 10,500 BP. It appears that the rock shelter was occupied for short periods on at least two separate occasions within a hundred years.

There is no doubt, however, that Akrotiri Aetokremnos is an unusual site. It is a small limestone rock shelter with -35 m2 of floor area, in an unlikely location for human habitation on a narrow terrace above a high sea cliff, some distance from potable water. Much of the deposit consists of a bone bed, containing the disarticulated remains of 500+ of the rotund pig­ sized Phanourios. People do not seem to have been worried by the debris underfoot or to have bothered disposing of bones over the nearby cliff. Simmons argues, rather unconvincingly, that the bone was cached as fuel. Other remains include stone artefacts, hearths and ash layers, burnt bone, eggshell, marine bivalves, limpets, Dentalium shells and the bones of pygmy elephant (Elephas cypriotes), introduced pig, introduced fallow deer, genet, tortoise, and various waterfowl. The lithic assemblage includes blades (characteristic of pre-pottery Neolithic sites in Cyprus) but lacks the ubiquitous ground implements and stone bowls found on PPN sites. At Akrotiri Aetokremnos the most distinctive tools are small thumbnail scrapers, which are not found at other Cypriot sites.

Some specialists remain unconvinced by the association between the cultural remains and the Phanourios bone bed. Sandra Olsen, one of the contributors to this monograph, points out that the bones are lightly abraded as if transported by sedimentary process and she notes there are no cut marks on the bones. This led her to conclude that the cultural remains were superimposed on a natural bone bed, and that some of the Phanourios bone was fortuitously charred by heat from overlying hearths. Simmons and most other contributors to this volume strongly disagree with Olsen: 29% of the bones are burnt, there are several hearths surrounded by burnt Phanourios bone and stone artefacts and marine shells are present in the bone bed. Radiocarbon dates for the Phanourios bone match those on charcoal and shell indicating there is little difference in age between the bone bed and cultural remains. And there seems no natural process that would produce such an accumulation of 500+ hippos in a small cliff-top rock shelter. For instance, the rock shelter does not act as a pit trap and none of the archaeological sediments are slope wash. The Phanourios remains represent a cross-section of age groups within a herd, including juvenile and adult animals, also ruling out interpretation as locus used for calving or as some sort of natural ‘graveyard’.

Simmons makes a strong case for an association between human occupation and the bone bed but direct evidence eludes him and this belies the title of the monograph. Readers will find that this volume is not an account of the process of faunal extinction on Mediterranean islands or a detailed study of the hunters, it is an ambit claim for human involvement in the process.

Until the excavation of Akrotiri Aetokremnos most researchers accepted the idea that the earliest settlement of Cyprus was by PPN people beginning ~9000 BP. These people left substantial architectural remains and elaborate walled villages such as Khirokitia Vounoi and Kalavassos Tenta. The Akrotiri Aetokremnos finds raise the possibility of an earlier settlement of the island by hunter-gatherer groups. Simmons argues these people were early PPN or late ‘epipalaeolithic’ Natufian people from the Levant. It is not clear whether or not this initiated a sustained phase of occupation of the island. On the face of it the Aetokremnos data could reflect episodic exploratory visits by mariners exploiting the herds of dwarf hippos that browsed on the hillsides of Akrotiri peninsula.

Australian archaeologists will find many of the issues in this monograph familiar: controversies over the dating of the earliest sites, the problems of establishing an association between cultural remains and extinct fauna, and models of prehistoric colonisation and extinction of endemic fauna. It is very instructive to watch Simmons and his colleagues work through these issues in the Cypriot context and with finer­ grained data than hunter-gatherer archaeology usually allows. This is a fascinating book that will interest anyone following local debates about extinction of Australian megafauna. Plenum’s Interdisciplinary Contributions to Archaeology is an interesting series of monographs, well worth watching.

Mike Smith
Review of ‘Faunal Extinction in an Island Society: Pygmy Hippopotamus Hunters of Cyprus’ by Alan H. Simmons and Associates
June 2002
54
67-68
Book Reviews
You must be a member to download the attachment ( Login / Sign up )