Review of ‘Exploring Central Australia: Society, the Environment and the 1894 Horn Expedition’ edited by S.R. Morton and D.J. Mulvaney. 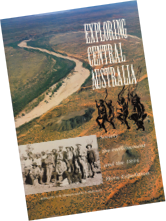 Exploring Central Australia is the proceedings of a symposium held in Alice Springs to mark the centenary of the Horn Scientific Expedition, which was mounted to explore the MacDonnell Ranges in 1894. The patron of the Expedition, W.A. Horn, was a South Australian mining magnate and pastoralist whose stated objective was that the participants should

record the geology, flora and fauna of that little known region together with the manners, customs and appearances of the Aborigines in their primitive state (p.4).

The success of the book results from the foresight of the symposium conveners who encouraged contributors not only to reassess the significance and contribution of each discipline represented in the Expedition, but also to explore a century of developments in the understanding of central Australia’s natural and cultural environments. The resulting volume is therefore both an historical overview of central Australian research and a comprehensive record of current research across a broad range of social and scientific fields.

The twenty-seven chapters cover a diverse range of topics which have been compiled in four sections; the ‘Expedition in context’, ‘People past and present’, ‘The expedition’s anthropological and scientific contribution’ and ‘Environment and Biota 1894-1994’. Topics include prehistory and human ecology, Aboriginal ecological knowledge, geology and palaeontology, aquatic ecosystems, plant communities including relic plants, invertebrate and vertebrate studies, hydrology, landform and climate. The omission of a chapter covering linguistics is disappointing, especially as research into the languages of central Australia has been vigorous and productive. There were only seven scientific members of the Horn Expedition although several were responsible for a number of disciplines. For example (Sir) Edward Stirling, a Physiology Professor and museum director from Adelaide, was appointed as both the medical officer and the Expedition’s anthropologist, while (Sir) Baldwin Spencer, Biology Professor at Melbourne University was appointed as zoologist and official photographer and later became the editor of the Expedition Reports. It says much about the direction of research practices today, when a review of the same geographic region draws thirty-nine specialist authors. The century of research in central Australia has seen disciplines both split into specialist strands and expanded into challenging new research areas such as archaeology, sociology, hydrology and climate studies.

The degree of success individual members achieved in attaining the Expedition’s aims are judged to have differed markedly across the various disciplines. While some laid solid foundations for further study, others are considered to have impeded research by suggesting that the arid regions had divulged their meager secrets. Rather than the many scientific discoveries, several authors agree that the most significant outcome of the Expedition was the meeting of Baldwin Spencer and Frank Gillen, the Postmaster and Special Magistrate at Alice Springs Telegraph Station, during the last weeks of the Expedition. This meeting led to one of the most fruitful partnerships in world anthropology. The emphasis by a number of authors, especially in the first two sections of the book, on the role that Social Darwinism played in formulating the objectives of the Expedition and directing the actions of the participants, positions the resulting four volumes published in 1896, Report on the Work of the Horn Scientific Expedition to Central Australia, in historical and theoretical perspective. Although authors draw on different data and reach different conclusions, the format of the book, where each chapter is a comprehensive independent paper, has led to some inevitable repetition especially in the latter two sections. While some repetition achieves a level of accent on issues, other repetition is superfluous and the reproduction of the same photograph of Palm Valley, in different sections of the book, is perplexing.

Gordon Briscoe provides a lone Aboriginal perspective among the reviewers. As a descendant of the Arremte men who assisted the scientists on the Expedition, his apprehension concerning the influences of the resulting anthropological findings from this and subsequent research in central Australia on legislators and society in general, are particularly salient. He expresses strong reservations about the role of Spencer and later anthropologists in advising governments on Aboriginal affairs and sees the resulting legislation leading to policies of protectionism and segregation, in turn leading to the setting up of reserves and missions. A reassessment by a number of the reviewers of other issues impacting on Aboriginal people is also undertaken. Mulvaney (p.8) describes and condemns the looting of sacred objects from a cache near Haast’s Bluff by Expedition members, on two grounds: first, that the publicity surrounding the episode spurred other collectors to follow their example and second, that objects were amassed without an understanding of their significance and function or the implications for the owners of the objects. Thus the perpetrators simultaneously rob the owners and fail science. A further failure to adequately acknowledge the depth and breadth of the contribution of Aboriginal people towards the Horn Expedition and later research is recognised in biological and anthropological chapters. In the light of this acknowledgment, the lack of any substantial focus on contemporary Aboriginal issues by all but Morton and Foran is regrettable.

Barry Hill’s review of Spencer’s Expedition narrative ‘Through Larapinta Land’ which positions the narrative in the literary and social contests of the last century, provides stimulation for the reappraisal of academic writing today. Researchers currently have to satisfy the conflicting demands of popular journalism and television which require the .’oldest’, ‘newest’ or ‘rarest’ and sensationalised promotion, with the demands of refereed journals and publishing houses for well substantiated and argued studies. The colourful descriptions and emotive responses to landscape and events evident in the writing of a century ago are now rejected as unscientific. While a number of contributors to this book have chosen instead a business-like listing of information which fails to engage the imagination, the majority have written in a less static manner, including elements which bring humanising touches, making the volume good reading for specialists or otherwise.

The inclusion of twenty-five of the original plates taken on the Expedition adds an attractive visual element to the book and is especially appropriate, as Morphy (p.147) asserts that Spencer and Gillen ‘revolutionised anthropological photography by using it to record events as they happened and by the informality and intimacy of their images rather than creating set tableaux and portraits’. The editors have selected images which support this claim and which convey the expanse of landscape, the diverse vegetation, the Aboriginal people the Expedition encountered as they conducted their daily routines, as well as informal portraits of the Expedition members. Also included is the earliest surviving photograph of Uluru, now an icon of central Australia, but rather than the picturesque sunset shots well known from contemporary travel brochures, Spencer has composed his picture to dramatise the massive scale of the monolith and bring to the viewer the effect of being overwhelmed by this natural phenomenon. However, a comparison between one of the photographs (p.2) with the same image in another publication (Vanderwal 1982:3) shows that the plate lacks clarity and tonal definition, which suggests that the method of reproduction used in this volume fails to do the images justice.

It is evident that the pace of research in central Australia has escalated in the past thirty years. The effects of climate and anthropogenic factors on biota and the long-term sustainability of agriculture in the arid inland are being questioned. The contemporary role of Aborigines as managers of the landscape they occupy, or hope to occupy once more, ensures an enriched and dynamic future for the region. Set against such a background, this volume provides a broad- ranging resource encompassing aspects of natural and cultural history for anyone interested in arid regions of Australia. It is sure to become a well-thumbed volume on any owners bookshelf.

Spencer, B. (ed.) 1896 Report on the Work of the Horn Scientific Expedition to Central Australia, 4 Vols. Melbourne: Melville, Mullin and Slade.

Ross, J.
Review of ‘Exploring Central Australia: Society, the Environment and the 1894 Horn Expedition’ edited by S.R. Morton and D.J. Mulvaney.
June 1999
48
59–60
Book Reviews
Download
You must be a member to download the attachment ( Login / Sign up )