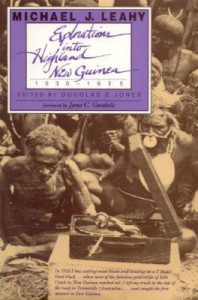 In the early 1960s when I first went to the Eastern Highlands of Papua New Guinea, I sat and talked with people who had grown to adulthood before seeing white people and to whom the first steel tomahawks had been rare and curious kinds of stones. Twenty-five years later a young man from that village wrote to me about the work I had carried out there: he was an undergraduate at the University of Papua New Guinea. Such is the rate of change in that amazing area.

The first white men walked through that same area only 30 years before I drove there. Among these few men were the Leahy brothers, one of whom wrote this memoir. He wrote it in the 1960s, basing it on diaries he kept of his travels, and sent it to his great friend, an American engineer, whose son, Director of the Alabama State Museum, edited and published it after his death.

One would like to know why Leahy wrote this memoir. Many of his travels in 1933 and ’34, in the Wahgi and further west, which form two-thirds of this book, were described in a long scientific article in Geographical Journal (1936) and in a ghost-written popular book with the unforgettable title of The Land that Time Forgot (1937). This memoir has some more detail, but mostly about the sequencing of the travels. It is not, however, as full or as precise as his diaries, which still reside in the National Library of Australia’s archives. These, one hopes, will eventually give the fullest account, unclouded by time’s hindsight and Mick Leahy’s own history of engagement with the country where he lived the rest of his long life. Nonetheless, the book has its value.

One important use will be for those who have only seen the brilliant movie, First Contact, with its extraordinary juxtaposition of black and white film shot by Leahy in the highlands (primarily the Wahgi valley) in the 1930s, and interviews in colour with some men who formed both sides to the encounter. The stunning impact of that film, we can see from this account, occurs partly because it treats the years 1930 to ’34 as a single event, and as the meeting of totally isolate societies with the Western world system. From this book, by contrast, we learn that ‘first contact’ was not always and everywhere quite so unexpected as the movie suggests, and that some of the film’s incidents have been mislocated. On the other hand, there is no mention here of Leahy’s own children by highland women.

Another value of the book is for what it tells us about Leahy and his companions. Most of the exploration accounts, both in the Pacific and Australia, are written by ‘explorers’. They are, in a sense, official accounts, prepared by people whose job it was to find out what and who was there and record it for the authorities back home. Cook, Bougainville and Flinders, along with Sturt, Mitchell and Kennedy, knew who was paying for their meals even when they were starving. The Leahys, by contrast, were more like the sealers of early Tasmania or the squatters who moved their flocks west over the Blue Mountains: their first job was to make a living and all else was secondary. Mick Leahy was a professional gold explorer and it was this that drove him on, panning in every creek in search of another major strike, with a company reward of 10,000 pounds if he made one. (He never did). So his observations on the country and its people are generally made in passing rather than as the result of planned, deliberate action. Leahy has no doubts about his superiority to New Guineans, technological, intellectual or moral, and none about his rights to move through the areas, removing only a few small bits of locally valueless stone, which he said he wanted for facial decoration – adding to his gold teeth.

For the archaeologist, per se. there isn’t a great deal in this book. There are some references to stone artefacts (which, I note delightedly, confirm my own later work), to settlement patterns, houses, gardens, axe quarries and shells. There is much more about the constancy of warfare and raids, house burning and garden destruction, factors which we tend to underestimate in the archaeological record and in prehistoric life generally. Nonetheless, we should read Leahy as we read the other explorers, to experience vicariously the shock of the unexpected and unforeseen, encountered by a fairly unsophisticated observer.