Review of ‘East of Wallace’s Line’ 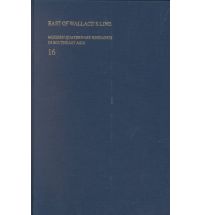 This volume arose from a symposium held, appropriately, on Magnetic Island in northern Queensland, Australia. Inspired by Wallace’s (1869) remarks relating to the ‘maritime enterprise’ that enabled people to move between the islands separating mainland Asia from Australia, this book provides a rich and discursive analysis of the elusive archaeological connotations of the terms ‘maritime’, ‘marine’ and ‘coastal.’ The time frame spans the last 50,000 years, with special emphasis on the last 3000 years, and the geographical scope is equally broad, again with a focus on islands occupied in the later Holocene.

Two chapters deal with the Pleistocene migrations into Australia. Over the past thirty years archaeologists have extended the accepted duration of a human presence in Australia from 10,000 to perhaps 55,000 (Jones, 1999; Mulvaney and Kamminga, 1999). John Chappell examines the ‘Pleistocene seedbeds’ of western Pacific maritime cultures and concludes from careful scrutiny of site ages and numbers that synchronous occupation of Australia and New Guinea was highly unlikely. He notes also that tropical coastal people were best equipped for voyaging at times of rising sea level, an insight accepted by Sue O’Connor and Peter Veth, who provide a refreshingly detailed and non-doctrinaire account of early human colonization of Australia.

Atholl Anderson’s scholarly disquisition on water-craft, notably single-outrigger canoes, explains how the Austronesians crossed the Indian Ocean about 1500-2000 BP. Matthew Spriggs examines the evidence for Neolithic occupation of the western Pacific islands and opts for an inception mainly in the period 3000-4000 BP. The nature and timing of pre-Lapita, Lapita and post-Lapita colonisation of Melanesia and the western Pacific is a contentious issue, and is the subject of thoughtful and robust debate by Jim Allen and by Ian Lilley. A concise analysis by David Roe of the subtle interconnections between coastal and inland societies in the Solomons and Vanuatu concludes that there are ‘no major linguistic, kinship or material culture boundaries’ between the saltwater, coastal and inland groups discussed. An excellent account of the late Holocene maritime societies in the Torres Strait Islands between Papua New Guinea and northern Queensland by Anthony Barham provides a wealth of ecological and chronological detail so essential to productive archaeological enquiry.

Anne Clarke describes the cross-cultural interactions between Indonesian (Macassan) fishing fleets and northern Australian coastal Aborigines during the period between about 1650 AD and 1906 AD. James Fox considers that ‘the migration of the Austronesians was one of the transformative events in world history – on a par with the migration of the Indo-Europeans.’ He discusses the role of three key Indonesian sailing populations (Bugis, Butonese, Bajau) and explains why they are today among the poorest groups in Indonesia. The final chapter by Sandra Pannell is a poignant epitaph on the accelerating disappearance of maritime societies and lifestyles in eastern Indonesia when confronted with powerful external forces (commercial fishing fleets, government-controlled relocation of entire villages) beyond their control.

This volume is a fitting successor to the classic volume edited by Mulvaney and Golson (1971), encompasses a broader geographical region, and shows the increasingly subtle interpretations now available to explain something of the cultural and ethnic diversity of the lands that so fascinated Wallace, Darwin, Cook and Flinders during their ‘maritime endeavours’.

*Reprinted from the British Quaternery Society Newsletter with their approval.