Review of ‘East of Wallace’s Line: Studies of Past and Present Maritime Cultures of the Indo-Pacific Region’ edited by Sue O’Connor and Peter Veth 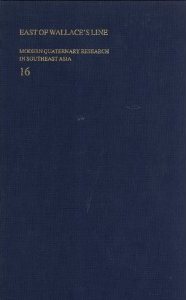 Conference proceedings are usually a mixed bag, but this volume is even more of a lucky dip than most, including overviews and case studies, short papers and long ones, some bursting with data and others undernourished. It also covers a wide range of subject matter, in the disciplines of archaeology, anthropology and geography, the only commonality being regional, as suggested by the title. While there is a quantity of new or new-ish data, there is quite a lot of raking over old ideas, perhaps inevitable given the number of review papers.

Atholl Anderson discusses the origins of seafaring in the Indo-Pacific region, essential in any consideration of the early settlement of the area but naturally fraught by a lack of hard evidence. He concludes that the seafaring techniques and capabilities for early voyaging need not be as sophisticated as is often posited. Matthew Spriggs provides a helpful review of the ‘spread of Pleistocene and Neolithic maritime cultures’ in the region, highlighting the rather curious usage of the concept of Neolithic as what comes after the Pleistocene in this area. Your reviewer cannot resist observing how shockingly she is misquoted on p.59, and trusts that other authors cited in this paper are better served.

The debate about ‘the oldest’ drags its weary bones across these pages, firstly in a paper by earth scientist John Chappell who considers technical aspects of relevant datings in fine-toothed scientific detail, while not paying much attention to archaeological context. He argues that of ‘a continuous maritime culture that stems from the earliest arrivals, not a trace has been found’ (p.92); this might surprise some archaeologists, but he is happy to argue that ‘coastal Australia was populated from the savannah’ (p.91). This argument is taken up by O’Connor and Veth, who deal with the irksome coastal evidence that exists in non-inundated Pleistocene sites by arguing it is all non-dietary. So we are back to the old Birdsellian notion that ‘the world’s first mariners’ (the title of O’Connor and Veth’s paper) were not coastal dwellers and acquired maritime technology for the sole purpose of moving themselves across oceans to burn their boats and rush inland as soon as possible.

Jim Allen, in a discussion of the development of marine economics in prehistoric Melanesia, subtly demurs from this, although his paper is concerned with longer historical trajectories of change than the nature of early settlement. Ian Lilley follows this with a discussion, what he calls a ‘roughing out’, of more recent matters, regarding the development of post-Lapita societies in northwest Melanesia. David Rhodes similarly addresses issues of socio-economic development in the Solomon Islands and Vanuatu, without coming to any clear conclusions, but it’s an interesting trip.

The most substantial contribution to the book is Anthony Barham’s paper on the Torres Strait Islands, which currently appear to support at least one archaeologist per island. This is a detailed overview of the biogeography, ethnohistory and archaeology of the region, not just as a parade of data, but harnessed to address the issue that ‘the emergence of maritime societies in Torres Strait is a late Holocene phenomenon’. While undoubtedly not the last word on the subject, this surely provides a baseline for continuing and future work.

Anne Clark provides another overview, this time of Macassan-Aboriginal interactions in northern Australia, but one curiously lacking in her own data. The two concluding papers also address the recent past, James Fox considering the activities of the so-called sea gypsies (Butonese, Bugis, Bajau and Macassans) in the Timor and Arafura regions both historically and contemporaneously, and Sandra Pannell focusing firmly on the present day with respect to the impact of western capitalism on the traditionally based maritime societies of eastern Indonesia.

This is a well-produced volume, but then it’s not exactly cheap. There are some editorial oddities (why are there quotation marks around indented quotations?) and minor mishaps, and Fox’s map could do with a few more place names for the uninitiated. O’Connor and Veth refer puzzlingly to the ‘apocryphal words’ of John Mulvaney (p.101: he did really write them, didn’t he?). On the whole however it is a useful collection which should be in all relevant institutional libraries, but is probably too expensive and not sufficiently focused for the average archaeologist.

Bowdler, S.
Review of ‘East of Wallace’s Line: Studies of Past and Present Maritime Cultures of the Indo-Pacific Region’ edited by Sue O’Connor and Peter Veth
2004
58
47
Book Reviews
Download
You must be a member to download the attachment ( Login / Sign up )