Review of ‘Digging it Up Down Under: A Practical Guide to Doing Archaeology in Australia’ by Claire Smith and Heather Burke 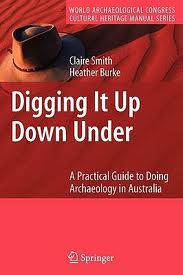 The concept is intriguing – how does one actually set about doing archaeology in unfamiliar parts of the world? What are the various ways that archaeologists in Australia, for example, go about their business? What is the essential legislation there? How does one obtain a permit to conduct fieldwork? What are the regionally specific terms, historical sequences, and artefact typologies one needs to know? What opportunities are there for students?

Addressing such questions is essentially the focus of Digging it Up Down Under: A Practical Guide to Doing Archaeology in Australia, and also of the World Archaeological Congress’ Cultural Heritage Manual Series, of which this is the inaugural volume. Promoting the notion of ‘archaeologists without borders’, these ‘field manuals have been written for both undergraduate and graduate students, and for emerging professionals. Each book constitutes a step-by-step guide to undertaking and successfully completing cultural heritage fieldwork in a particular country or region’ (p.vii). Other volumes now under development will focus on India, the United Kingdom, northwestern South America, and western-central Europe.

Digging it Up Down Under consists of 10 chapters, each focusing on different aspects of doing Australian archaeology: 1. ‘A Brief History of Australian Archaeology’; 2. ‘An Introduction to Indigenous Australians’; 3. ‘Finding Funding’; 4. ‘Living It Up Down Under: Working in an Australian Setting’; 5. ‘Working with Legislation’; 6. ‘Doing Archaeology in Aboriginal Australia’; 7. ‘Doing Historical Archaeology in Australia’; 8. ‘Doing Maritime Archaeology in Australia’; 9. ‘Conserving and Managing Cultural Heritage’; and 10. ‘Documentation and Publication’. The authors also provide a Glossary and four appendices, which include the AAA Code of Ethics and a sample consent form. Each chapter includes a ‘References and Future Readings’ section. My comments below touch on aspects of only some of these chapters, especially those whose subject matter may not be evident from the titles.

Smith and Burke’s excellent Preface identifies the goals of the volume (and to a degree, the series), and situates nicely all that follows. In fact, this section would have been more effective as the first chapter of the volume, especially since Chapter 1 jumps directly into the history of Australian archaeology. Their review includes a 3.5-page timeline that neatly encapsulates notable events in the historical development of Australian archaeology (although there will likely be detractors concerning who/what is/isn’t included here). Included are the notable discoveries, excavations, publications, conferences, legislation, and controversies that have shaped Australian archaeology. The first entry is somewhat questionable – ‘50,000 Aboriginal people interpret the material remains of human behavior’ (p.5), – but is followed with ‘1669 William Dampier makes the first written records of archaeological observations in his analyses of Aboriginal campsites in WA’ (p.5).

Chapter 2 reviews the pre-contact history of Australia, from founding populations and models of colonisation through to the range of Holocene and more recent lifeways. Included in this summary are reviews of such topics as megafauna extinction, fire-stick farming and resource intensification, trade networks and exchange, and, of course, Aboriginal culture, including the Dreaming, social and linguistic diversity, and the nature of Aboriginal knowledge systems. As a review of ancient and traditional lifeways, environments, and technologies of this vast continent, this chapter initially feels lightweight until one remembers that it is meant only as a primer on the subject within the larger context of this manual.

One other chapter deserves special attention. For many readers, Chapter 4, ‘Living It Up Down Under’ may be the highlight of the volume for it focuses on the realities of doing fieldwork in Australia. As recounted by the authors themselves, and through a series of sidebars written by others, the reader is introduced to the very human dimension of fieldwork and given sensible advice for cross-cultural encounters with Australian archaeologists, and to a host of potential dangers stemming from encounters with Australian fauna or from ignoring social conventions relating to alcohol consumption. Finally, there is Colin Pardoe’s ‘Top Twenty Tips for ‘Living it Up Down Under’’ sidebar, which rounds out the chapter with such bon mots as:

6. If you are a proponent of culture history, get in touch with the ANU.

7. If you are a proponent of post-processualism, get in touch with Flinders University.

8. If you are a proponent of processualism, go anywhere you like and do any darned thing you like. Australia was made for processualism.

The authors go to great lengths throughout the volume to ensure the presence of Indigenous peoples on the past and present archaeological landscape. In Chapter 6, for example, the first section introduces and describes the primary site types to be encountered and the artefact recording systems commonly used. But the bulk of the chapter contextualises these within the realm of the living descendant communities. This is exemplified by the section headings: ‘Undertaking Ethnohistoric Research’, ‘Ethical Issues in Indigenous Archaeology’, ‘Applying to Work on Indigenous Lands’, and ‘Seeking Indigenous Support for Archaeological Research’. There are many valuable insights here, gleaned both from the authors’ extensive collaborative work with Aboriginal communities, and from those who contributed sidebars. Additional information in similar vein appears in other chapters, including ‘Working with Community Groups’ (Chapter 7), ‘The Burra Charter Model for Assessing [site] Significance’ (Chapter 9), and ‘Conservation or Desecration?: The [rock art ] Repainting Debate’ (Chapter 9).

Finally, the authors are to be commended for concluding the volume with a chapter dedicated to ‘Documentation and Publication’, an all-too-often neglected aspect of doing archaeology. There is much good advice here for archaeologists working in any part of the world concerning accountability, the necessity of community-oriented reports, benefits sharing, publication permissions (including photographs), and intellectual property rights. Sage advice is also provided in sidebars, prepared by individuals experienced in journal and book publishing.

Although touted as a means to facilitate non-Australians’ research and working within Australia (or other countries for other volumes in the series), it is likely that few will ever put the advice provided into practice. Yet this doesn’t diminish at all the contribution of Digging it Up Down Under. The greatest value of this volume, and likely the entire series, may be when these are viewed as ethnographies of archaeological practice. In this case, Smith and Burke’s field manual reveals important things about the nature of Australian archaeology today, its developmental history, and the social context in which it is today practiced. Here one also finds insights into the Australian character and welcome advice on the realities of health issues, taxes, driving, and employment.

As with many ethnographies, our knowledge and understanding of the cultural system observed is highly influenced by the author(s), the informants, and the time and place of observation/interview. And, as Karl Heider (1989) reminds us, different ethnographers can produce different sets of observations and interpretations. Thus, the particulars of the two authors, and the fact that this is a WAC volume, do influence the overall character of the volume: other archaeologists may have produced a significantly different field manual for Australia. But for Smith and Burke, there is an emphasis on collaboration and on ethical practice, both of which reflect an emerging trend in archaeology elsewhere. Indeed, it is the inclusion of such topics – ethics, discussions concerning relations between archaeologists and descendant communities, and the pervasive nature of archaeological resource management today – that provides this ethnographic snapshot, this glimpse into how and why archaeology is done in Australia this decade.

Digging it Up Down Under does have several noticeable shortcomings, some minor, a few distracting, particularly in terms of the organisation of some chapters. For example, the second half of Chapter 1 switches to non-historical subjects (e.g. ‘How to Get Work in Australia’ – an important and enlightening section but one much better placed elsewhere). I would also have expected some illustrations of major artefact types, as well as perhaps several maps providing more detail that the continental-scale maps provided. Another useful addition would have been Nicholas Peterson’s culture area map, reprinted and extensively discussed in Lourandos (1997).

Overall, Smith and Burke have produced an interesting and engaging introduction to doing archaeology in Australia, not just in terms of procedure, but also its historical, ethical, and social contexts. And the authors do so in a way that not only addresses the needs of professional archaeologists, but also, through the scope and style of the volume, makes a great deal of information accessible to students, Indigenous communities, heritage managers, and non-government organisations who may have limited knowledge of the topics covered. I commend the authors for their vision, for the care they’ve taken in emphasising the responsibilities archaeologists have not only to the archaeological record, but to the descendant communities whose ancestors created and embody that record, and finally for conveying to a wide audience the human dimension of doing archaeology in Australia. I very much look forward to future volumes in this series.

George Nicholas
Review of ‘Digging it Up Down Under: A Practical Guide to Doing Archaeology in Australia’ by Claire Smith and Heather Burke
June 2009
68
71-72
Book Reviews
You must be a member to download the attachment ( Login / Sign up )