Review of ‘Cycles of the Sun, Mysteries of the Moon: The Calender in Mesoamerican Civilization’ by Vincent H. Malmstrom. 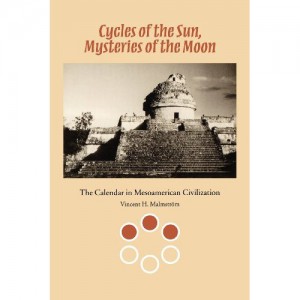 In Cycles of the Sun, Mysteries of the Moon: The Calendar in Mesoamerican Civilization, geographer Vincent Mamlstrom synthesises his ideas concerning the origin and diffusion of the calendar in Mesoamerica, as first presented in an article published in Science in 1973. He argues that both the 260-day sacred calendar and the 365-day secular calendar originated at the site of Izapa, located in the Soconusco region of Mexico, in the fourteenth century BC. From there, he suggests, the calendar gradually diffused throughout Mesoamerica. This resulted in dozens of sites, separated by hundreds of miles of space and many centuries of time, adopting the same principles of alignment, involving either a solar orientation to one of the solstice positions or an orientation to the August 13 (zenith) position of the sun at Izapa.

Malmstrom attributes the development of the 260-day calendar to the needs of an early farming society to schedule the planting season. At Izapa, there are alternating 260 and 105-day intervals between the zenith passages of the sun. Here, the rains (which mark the beginning of the agricultural cycle) begin at the time of the sun’s northward passage (April 30), whereas the maize is ready for harvest by the time of the sun’s southward passage (August 13). The zenith passages, therefore, provide a natural framework for the agricultural cycle. This is utilised in Soconusco today, where villagers prepare and harvest their fields according to the rhythms of the sun.

Malmstrom bolsters his argument for an Izapan origin of the calendar by pointing out that the date of the second zenith passage (August 13) corresponds to the date chosen for the start of the Long Count calendar according to the 584,285 correlation favoured by one school of Mayanists. He presents evidence to show that this correlation is the only one that makes sense in astronomical terms, but his arguments are suggestive rather than conclusive. Ethnohistoric evidence favours a second correlation (584,283), which differs by two days.

Despite the compelling nature of his thesis, Malmstrom fails to address several criticisms raised by Mesoamerican scholars. Perhaps the most damning is the fact that there are no calendrical inscriptions from Izapa. If this site does indeed represent the birthplace of the calendar, then why are no dates recorded on any of the 80 or more monuments that can be attributed to the site? Moreover, Malmstrom does not respond to concerns raised by Munro Edmonson (1988), who takes issue with his astronomical data. Specifically, Edmonson finds that, while Izapa does experience a 2601 105-day division in terms of zenith passages, the second pas- sage occurs on August 14, rather than August 13 (pp. 119- 20). Indeed, Malmstrom fails to cite Edmonson’s book at all, which seems an astonishing omission, since both authors are addressing the same topic, albeit from different perspectives.

Malmstrom also does little to counter opposing models for the inception of the 260-day calendar. Of these, the gestation hypothesis has received the most attention from Mayanists in recent years. Its proponents attribute the genesis of the 260-day calendar to the use of the lunar cycle for determining the length of human gestation (measured even today by the Quiche of highland Guatemala in terms of nine 29 day lunations, or 261 days). Clearly, this is a compelling argument that deserves further consideration.

The second theme of the volume centers around the diffusion of the calendar throughout Mesoamerica (presented in Chapters 5-11), with detours in each chapter to discuss the culture history of a particular region. Although his arguments are clearly presented, Malmstrom’s exposition suffers from a reliance on outdated archaeological data and models, as seen in statements describing the Maya’s ‘failure to survive as an advanced and vigorous culture until the arrival of the Europeans’ (p.130), and his claim that Edzna represents the earliest major urban centre in the Maya lowlands (p.108). Factual errors such as these could have been avoided by a more careful consideration of recent sources, such as the fifth edition of The Ancient Maya (Sharer 1994).

The anecdotal tone of the volume and the lack of careful referencing suggest that it was intended for a lay rather than a professional audience. I would not, however, recommend it for a beginner unfamiliar with the topics presented, since Malmstrom does little to distinguish between fact and speculation in his writing.

Vail, G.
Review of ‘Cycles of the Sun, Mysteries of the Moon: The Calender in Mesoamerican Civilization’ by Vincent H. Malmstrom.
December 1997
45
72
Book Reviews
Download
You must be a member to download the attachment ( Login / Sign up )