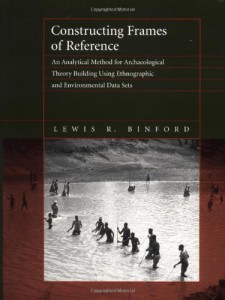 Lewis Binford has devoted his professional career to the development of a rigorous scientific framework for the reconstruction of past human lifeways. During the past 40 years, Binford has made significant contributions to the foundations of contemporary anthropological archaeology. Binford’s major influence on the development of scientific archaeology or the ‘New Archaeology’ is reflected in his seminal publications that emerged in the 1960s–1980s (Binford 1962, 1965, 1968, 1972, 1978, 1980, 1981, 1983, 1989; Binford and Binford 1968). The ‘New Archaeology’ and subsequent post-processual approaches resulted in critical assessments of archaeological theories and methods employed to make inferences about past human behaviour. The epistemological dynamics associated with scientific archaeology have had a major impact on the ongoing evolution of archaeological theory and method.

This volume represents a landmark synthesis of Binford’s approaches to the scientific analysis of past human behaviours. “The primary problem that this book addresses is the development of a method for productively using ethnographic data to serve archaeological goals” (p. 3). Binford provides a detailed analysis of ethnographic and environmental data from 339 historically known hunter-gatherer societies and argues that behavioural variability is influenced significantly by a small number of environmental and demographic variables. With a focus on hunter-gatherer dynamics and the emergence of early farming societies, the book is an essential reference for all prehistorians. Binford’s critical assessment of the employment of ethnographic data in studies of past hunter-gatherer societies makes this book particularly valuable to Australian archaeologists.

The book is divided into four parts. Part I Exploring Prior Knowledge and Belief consists of three chapters that summarise prior conceptions about hunter-gatherers. Chapter 1 “Founders effect” and the study of hunter-gatherers assesses the utility of theories and methods developed by the anthropological ‘founders’ of huntergatherer research. The role of past anthropological research in relation to the continuing growth of archaeological theory and method is addressed. Chapter 2 Human actors and their role in the evolutionary play addresses the unique characteristics of humans that influence responses to environmental variables. Binford focuses on ‘planned or volitional action and on the associated idea that goal-directed behavior, extreme behavioral plasticity, and the capacity for culture itself are important human characteristics that must be considered as constants in any discussion of humans as actors in the ecological theater and the evolutionary play’ (p. 43). Chapter 3 The play of ideas in the scientific theater discusses the important role that science plays as a ‘learning strategy’ in relation to the advancement of archaeological knowledge about human behaviour in past societies. Two different kinds of analytical tools, frames of reference and projections, are discussed. A scientific investigation of the human past offers a systematic and critical approach to the analysis of archaeological data within the context of particular environmental contexts. ‘The ability to tease out implications from repetitively patterned relationships among variables (classes of data) provides the clues to the way the world is organized and how it works in a dynamic sense’ (p. 48).

Part II Methods for Using Prior Knowledge: Building Frames of Reference and Models consists of three chapters that address the methods involved in the development of frames of reference and models from ethnographic and environmental data. “These three chapters outline the logic and actual construction of intellectual models and frames of reference and are central to the tactical exploration of the procedures developed in subsequent chapters” (p. 4). Chapter 4 Setting the stage for the evolutionary play: The Earth’s climates, plants, and animals documents the variability in environments in which hunter-gatherers are known to have lived. Ecological variables that can be used to record specific, relevant properties of global environments are introduced and defined. These environmental data provide the ecological basis for the development of hypotheses regarding explanations for ethnographic variability. Chapter 5 Designing frames of reference and exploring projections integrates the ecological variables documented in Chapter 4 and the analytical tools (frames of reference and projections) as a means to assess various aspects of hunter-gatherer behaviour. For example, the distribution and population density of hunter-gatherer communities across the globe is related to net above-ground productivity of various plant communities in these regions. In Chapter 6 Building a baseline for analysing niche variability among ethnographically documented peoples Binford identifies the range of habitats or ‘energetic domains’ within which hunter-gatherers are known to have occupied. He then employs a case study which approximates the subsistence base, degree of mobility, and ethnic diversity that may have characterised hunter-gatherer populations in particular regions of Europe preceding agriculture.

Part III Recognising Patterns and Generalizing about What the World is Like consists of three chapters that employ cross-cultural ethnographic comparisons of diverse hunter-gatherer groups as a uniformitarian strategy to reconstruct past hunter-gatherer behaviours. Chapter 7 Twenty-one generalisations in search of a theory employs generalizations derived from pattern recognition studies to build a model of factors that might relate to variability in hunter-gatherer group size. In Chapter 8 A flat earth or a ‘thick rotundity’?, the ethnographic hunter-gatherer data set is employed to investigate how group size varies in a wide range of circumstances. Variables addressed include degree of mobility, social cooperation, food storage, changes in the organisation of labour, and various means of intensification in relation to food yields. Chapter 9 The play’s the thing in the scientific theater addresses how processes of intensification lead to increased sedentism and changes in the organisation of hunter-gatherer cultural systems.

Part IV Putting Ideas, Second-Order Derivative Patterning, and Generalizations Together: Explorations in Theory Building includes the final three chapters of the book. This section of the book focuses on analysis and integration in relation to the explanation of the observed variability in the hunter-gatherer ethnographic data base. Chapter 10 A disembodied observer looks at hunter-gatherer responses to packing discusses the interaction of density- dependent variables in relation to intensification processes. Binford defines intensification as “the process that impels hunter-gatherers to increase the amount of food they extract from smaller and smaller segments of the landscape” (p. 363). Intensification is linked to increases in population size or ‘demographic packing’. It is argued that habitat richness may condition the rate of demographic change and that demographic packing is the factor forcing major adaptive changes. Chapter 11 The evolution of system states examines social complexity that arises from the integration of previously independent systems. Ethnographic case studies are employed to examine the causes of internal social differentiation and ranking in hunter-gatherer societies. Binford contrasts internally ranked and socially stratified societies that were more dependent on aquatic resources with hunter-gatherers primarily dependent upon terrestrial plants who employed social differentiation based on an individual’s progress through a series of age-graded sodalities or ‘secret societies’. The former employed wealth-based distinctions, polygamous privileges for the elite, and council-based decision making. In Chapter 12 The last act crowns the play Binford considers the spatial and temporal patterning of different system state conditions in order to clarify the way in which archaeologists approach the archaeological record. Density-dependent thresholds that mark major interruptions in the character, complexity, and tactical behaviour of hunter-gatherer groups are discussed in an attempt to “build a theory about the self-organizing processes of intensification among hunter-gatherers” (p. 461).

In the Epilogue, Binford discusses some of the broader implications of major organisational changes that have occurred when hunter-gatherer groups have reached and exceeded the ‘packing threshold’. In addition, underlying principles in relation to “the development of a method for productively using ethnographic data in the service of archaeological goals” are reviewed (p. 471).

Although major advances have been made in the development of an anthropological archaeology, Binford argues that the discipline remains in a nascient stage of theory building. Constructing Frames of Reference makes a significant contribution to ongoing theory building in contemporary archaeology.

Binford, L.R. 1968 Some comments on historical versus processual archaeology. Southwestern Journal of Anthropology 24:267–275.

Binford, L.R. 1983 In Pursuit of the Past: Decoding the Archaeological Record. London: Thames and Hudson.

Pate, F.D.
Review of ‘Constructing Frames of Reference: An Analytical Method for Archaeological Theory Building using Ethnographic and Environmental Data Sets’ by Lewis R. Binford
2005
60
82–83
Book Reviews
Download
You must be a member to download the attachment ( Login / Sign up )