Review of ‘Bushfires and Bushtucker: Aboriginal plant use in central Australia’ by Peter Latz 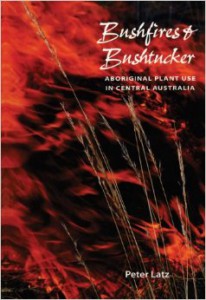 This book is about the economic botany of Central Australia. It is very carefully researched and well-presented, and it consists of two parts: Part I is a relatively short (72 pages) account of the characteristics of the central Australian desert and the Aboriginal uses of plant resources, together with a chapter on Aboriginal fire use; Part II is an extensive (225 pages) and well-illustrated list of plants and their uses. The last 90 pages of the book consist of a series of very valuable tables of primary and summary data and information sources, which I will discuss further below. Latz wrote the book because ‘the detailed knowledge of plant food knowledge and usage held by Aboriginal people has been lost forever in much of Australia. … In some ways this book is my attempt to ensure that this knowledge is not lost in Central Australia.’ (p.xi)

In style and tone, this book seems to fall between the less scholarly ‘bush tucker’ books and the more-detailed, but relatively inaccessible journal articles, scholarly databases and theses. While there are other general books which deal with the economic botany of Australia, especially the non-arid areas, this is the most comprehensive work to deal with Central Australia, and is based on much first-hand observation and research (Latz 1982).

This is a well-presented book, with a particularly eye catching cover. The line illustrations and photographs are useful and appropriate, but it should be noted that the book is not a field guide. There are some typographical errors, particularly in the citing of named authors (e.g. Griffen for Griffin p.22 and elsewhere). In my view, the strongest parts of the book are the plant lists in Part II, and especially the tables in the appendices. These add detail to the more general account of plant uses in Part II. The plant lists contain, for example: references for each plant; a list of species utilised in Australia, but not used in the area researched; a list of species given Aboriginal names, but not utilised, or utilised for minor purposes only; and an extensive list of plant names in seven central Australian languages. Another strength of the book is the use and acknowledgement of research in unwritten forms, which includes research undertaken by schoolteachers, government officials and other people living in Central Australia (p.390). Inevitably one could disagree with some of the statements based on the literature (e.g. that Macrozamia can be detoxified by heat alone), but these are minor quibbles. This book is obviously the product of careful and long-term research, both first hand and literary. However, I would have liked to learn about Latz’s practical experiences living off the land, and more about how these showed up the deficiencies of current literature sources (p.xi).

I think the weakest part of the book is the first part. in particular the chapter on Aboriginal people and fire. Firstly, Latz makes no reference to arguments that oppose the view of substantial firestick farming, and secondly, no reference is made to recent work on the prehistory of Central Australia (e.g. Smith 1993; Veth 1993) and its colonisation, instead referring only to older and outmoded models. There are very few references to relevant literature of the 1980s and 1990s. However, I suspect that most readers of this book will be more interested in the uses of plants rather than their history, and so this book will be a useful and attractive reference and will have a long shelf life.

Veth, P. 1993 Island in the Interior: The Dynamics of Prehistoric Adaptations Within the Arid Zone of Australia. Ann Arbor: University of Michigan Press. International Monographs in Prehistory, Archaeological Series 3.

Beck, W.
Review of ‘Bushfires and Bushtucker: Aboriginal plant use in central Australia’ by Peter Latz
June 1997
44
71
Book Reviews
Download
You must be a member to download the attachment ( Login / Sign up )