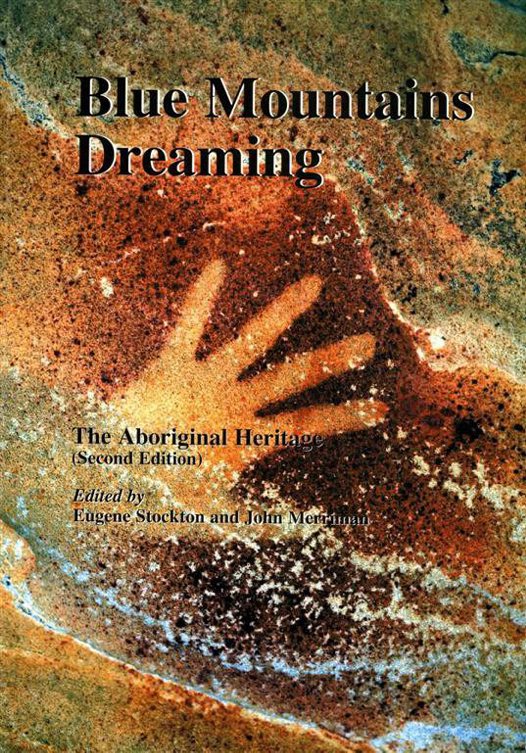 The editor of this book, Eugene Stockton. is one of the pioneers of Blue Mountains prehistory and archaeology. He grew up in the Blue Mountains, and it was as a teenager in this environment that his life-long interest in archaeology began. Subsequently his work with the Catholic ministry brought him back to the region. Stockton is still actively interested in Aboriginal sites and the Blue Mountains and he has been involved with the Aboriginal people from the region for many years. This book in many ways demonstrates the breadth of Stockton’s interests as well as that of its contributors all of whom are interested in the local Aboriginal history. The area covered in the book extends east-west from the Nepean River to Mt Victoria/Bell, and north-south from the Cox River to just north of the Bells Line of Road.

Stockton describes the types, number and distribution of Aboriginal sites now recorded in the Blue Mountains. Locating the more than 700 sites that are now recorded was not simply the result of work by the archaeologists mentioned above, but involved many local people from both Aboriginal and non-Aboriginal groups. The large number of sites now being recorded is interesting since the Blue Mountains have often been seen as inhospitable and sparsely occupied by Aboriginal people. Site distribution patterns and pre-European occupation of the area are interpreted in terms of past and present climate, physical landscape, resources, and the biases introduced by researchers’ interests and site destruction. Of particular interest is Stockton’s hypothesis that the distribution of art sites and stone arrangements reflects an area of neutral ground for intertribal ceremonies between the Gundungarra who came from the south/ west and the Dharug from the north/east.

Two chapters are by Jim Kohen, whose research into Aboriginal prehistory has centered on the western Cumberland Plain, but whose interests extend to the contact history and Aboriginal languages of the area. Kohen’s contributions concern the languages of the Gundungurra and Dharug people who inhabited the Blue Mountains. A list of over 500 words and phrases used by the Gundunguma people that was compiled from published accounts and unpublished manuscripts is included. For the Dharug language, in addition to a word list, Kohen provides grammatical details that were first published in 1903 by R.H. Mathews.

The initial chapter is by Julie Stockton (Eugene Stockton’s sister). It is in narrative style about an Aboriginal boy growing up in the area in pre-contact times, the normal daily activities and events that he was involved in and that happened around him, and the rites he would face as he grew up.

First contacts and Aboriginal history up to the present are covered by Maureen Breckell and by Jim Smith. Breckell documents the journeys made by the first explorers into the Blue Mountains and their contacts with Aboriginal people. Most contacts were brief, as were most of the explorers’ descriptions of the Aboriginal people and their culture. It was not until the 1890s that people such as R.H. Mathews began to record more detailed anthropological evidence, but by this time many of the people w m gone and the survivors were living on reserves and camps on local farms in places such as the Burragorang and Megalong Valleys. The history of some of the people that moved up from the valleys to live in West Katoomba Valley until it became the Catalina Park racing circuit in the 1950s is related by Jim Smith. People from this community still live in Katoomba today.

John Merriman’s chapter on ‘Aboriginal ecology of the Blue Mountains’ focuses on the food resources available to Aboriginal people. Historical sources, oral history as well as present-day descriptions of plant and animal communities are used by Merriman to describe the wide range and richness of the area’s food resources and to show ‘what a rich land they (the Mountain people) lived in’.

The book is packed full of information about Aboriginal life in the Blue Mountains written by different authors from various angles. It is well presented with maps, drawings and photographs of Aboriginal sites and the Blue Mountains environment. The text is written sensitively and in plain English but with a level of factual information and references that makes the book of interest to professional researchers (e.g. archaeologists, pre-historians, historians), as well as to Aboriginal people, students at all levels, and the interested public. A book at a reasonable price and well worth getting.

Attenbrow, V.
Review of 'Blue Mountain Dreaming: The Aboriginal Heritage’ by Eugene Stockton
June 1995
40
70–71
Book Reviews
Download
You must be a member to download the attachment ( Login / Sign up )