Review of ‘Artefact Classification: A Conceptual and Methodological Approach’ by Dwight W. Read 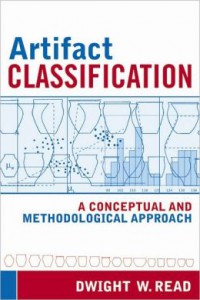 This important contribution summarises a lifetime involvement with teaching, developing and debating approaches to artefact classification. Dwight Read brings to this task his own varied contributions and highly-developed logical and mathematical skills. Classification can take several forms and have different aims. While pragmatic classifications help organise masses of material, aiding information retrieval, Read is more concerned with the deeper issues underlying the ways in which we structure artefacts and analyse our data and how these affect the questions we ask. His work is situated firmly within the Americanist tradition of archaeology as anthropology, implicitly favouring a processual agenda and with an underlying principle that our classifications should in some sense mirror the emic classifications and concepts of their makers and users. Running through the book is a concern for the compatibility of the ideational and the material or phenomenological – that is how to relate ‘ideal’ forms with the varied and diverse examples found in the real world.

The initial literature review deals with the classic systems of typological analysis which have characterised American archaeology over several generations, from Rouse, Brew and Krieger in the 1930s and 1940s to Ford in the 1950s and on to Adams and Adams’ 1990s arguments for multiple, special-purpose, rather than universal typologies and Dennell’s ‘systematics’. The fundamental concepts, logic and structures of these varied approaches are summarised and critically evaluated, providing a basis for establishing key principles and definitions. Read appears most critical of the Adams and Adams utilitarian approach, although both he and they are concerned with problem-oriented approaches. While it is difficult in a study of principles such as this to situate general ideas in specifics, nevertheless some greater consideration could have been given to the ways in which aims and problems affect – or are affected by – approaches to classification. A longer discussion of pottery typologies, built on an analysis of the influential type-variety system as developed in the 1950s, follows. As with much American archaeology, methods and ideas developed elsewhere in the world receive relatively little attention. It is a pity that other formal approaches to definition and analysis were not also addressed in a similar fashion. The work of David Clarke in Analytical Archaeology (1968), for example, deals explicitly with many similar issues, situating definitions of attributes and of types within a set of structured spatial, temporal and cultural frameworks, and developing systems leading directly to explanation.

Having attacked and developed some key principles in discussing these approaches, Read moves on to consider ‘objective’ approaches to classification. A strong critique of Spaulding’s early statistical techniques provides a starting point for drawing out and clarifying additional concepts, such the nature of attributes and how their association or combination should be used and understood – in part a consideration of patterning on individual objects and patterning of groups of objects. This sets the scene for a further critique of other techniques, such as numerical taxonomy. Once again, summary and critique allow a discussion of related issues: here problems and sometimes confusions in the use of different types of variables and dimensions of variation are dealt with.

This leads directly on to a consideration of measurement. Here, as elsewhere, Read is concerned that the techniques used and attributes selected should have some cultural saliency, and be useful for or relevant to understanding past behaviour. The discussion then moves to a more technical consideration of particular ways of measuring and defining artefact shape. Two issues come to the fore: whether it is possible to define artefact classes that are internally homogenous and externally isolated; and a belief that objects are artefacts by virtue of the way they are conceived by their makers and/or users. Aspects of such ‘conceptualisations’ are then explored in a brief discussion of production sequences and chaîne-opératoire.

In developing methodologies of quantitative classification Read reconsiders what he has previously identified as ‘the double bind problem’, where the identification of culturally salient artefact types depends on comparisons of individual artefacts with others of the same type, although obviously we cannot know what that type is in advance. He resolves this problem by a comparison of measurements of individual items with a group of other items, in order to identify aggregate patterning as the basis for class definition. Appropriate statistical procedures are described in detail with case studies of stone tools and pottery vessels. Further qualitative methods are then presented which look at patterning based on type frequency counts, leading to productive insights into behavioural patterns.

While earlier discussions and examples tend to concentrate on functional or ‘usage’ types, the final section deals with the vexed question of style and function. Here an approach is set up which separates traits as functional, isochestic, truncated and neutral. This forms the basis for considering aspects of cultural transmission, development and selection, set within a discussion of evolutionary archaeology. Here more reference could have been made to more of the literature on learning and cultural reproduction: considering those aspects which go to define groups in the present and, more problematically, in the past.

These issues, as with others, involve the nature and degree of variability in attributes, artefacts and assemblages. However, there could have been some greater recognition that variability is not so much a problem to be overcome, as a problem to be addressed. This necessitates clearer definitions of context, assemblage definition and scale. While relationships and traditions may be seen as shifting modes of individual or sets of attributes through time or across space, the degree of variability within cultural systems can give different insights, into, for example, how inclusive or exclusive a community might be, or the degree to which individuality may be expressed. The measurement of variability, of course, presupposes equivalent units of observation, for variation is likely to increase with duration and distance – often themselves dependent on understanding degrees of depositional and taphonomic integrity. These issues of context, scale and integrity are not clearly addressed by Read, although his views on the nature and impact of natural or artificial assemblage boundaries would be of interest, and would expose additional structures in the archaeological record which constrain or define research problems and the identification of patterns within and between different datasets.

How relevant is this book to Australian readers? On the one hand, it is a valuable study of some key issues in and approaches to archaeological practice. On the other, its relatively limited scope, its focus on material which falls more readily into different classes and its failure to address the inherent complexities in the archaeological record limit direct application to the generally more amorphous local assemblages of stone tools, all too often from contexts of low temporal definition.

David Frankel
Review of ‘Artefact Classification: A Conceptual and Methodological Approach’ by Dwight W. Read
June 2008
66
71-72
Book Reviews
You must be a member to download the attachment ( Login / Sign up )