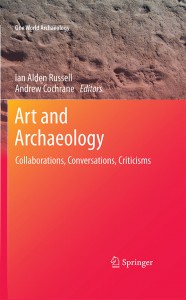 As the Editors state in their introduction to this volume, art and archaeology are not recent bedfellows. What then can we, as archaeologists, gain from a union between the two? Contributor Doug Bailey implores us to take ‘greater risks’ (p.231) and promises that such risk-taking will reward those ‘who explore the radical potential that lurks within the connection’ (p.233) between archaeology and art. Bailey acknowledges that art and archaeology are radically different disciplines and warns that rewards will not be realised simply by one discipline visiting the other, but, instead, success requires each practitioner to move into novel spaces in order to find new ways of thinking about the past. To help the reader find such novel spaces, the Editors have compiled a volume of 15 papers that aim to identify the commonalities between art and archaeology, demonstrate the ways that archaeologists can learn from the practice of visual arts and provide successful examples of these synergies.

The book is divided into four thematic sections Part I, ‘Exploration and Experimentation’, brings together the work of five archaeologists, all of whom have engaged with modern and contemporary art as a source of inspiration. Fortunately, none become bogged down in lengthy haggling over what constitutes ‘art’. Colin Renfrew discusses the current acceptance of archaeological objects exhibited as art, but warns against the simple appropriation of these objects by contemporary artists or the romanticising of the past that must inevitably result in superficiality. Instead, he urges artists to consider archaeological objects in terms of materials, or the thought processes of the original artists. Turning more to archaeology, Andy Jones considers Upper Palaeolithic sculptural forms and challenges the interplay between passive material environments, the characteristics of materials and their influence on human agency. He espouses an experimental gestural approach to the interpretation and understanding of Palaeolithic practices. Focusing on the human body, Liliana Janik argues for a new understanding of human visual expression and the way the brain processes visual information. Using examples from contemporary and ancient art, she explores the universality of a visual vocabulary based on being human, a concept she labels as neuroaesthetics. In the final short but stimulating chapter of this section, Andrew Cochrane and Ian Russell describe a somewhat cheeky experiment in which reproductions of ancient Cycladic figurines were displayed in such a way that their origins as ancient objects were altered, thus changing the perception and behaviour of viewers. This led the authors to consider how people had engaged with objects through time: was it unintentional, ad hoc and unexpected, or considered, premeditated and intentioned?

The second section of the volume, ‘Curatorial Practice’, focuses on the production, presentation and display of contemporary arts within archaeological and heritage scenarios. Here, we find examples of the novel spaces that Bailey flagged. Ian Russell reflects on a series of individual artworks from exhibitions titled ‘Ábhar agus Meon’, which he curated as part of Ireland’s hosting of the Sixth World Archaeological Congress at University College Dublin in 2008. The displays were placed in locations shared between the contemporary arts, archaeology and Heritage Ireland. His comprehensive overview of the artworks, exhibitions and projects details the ways in which he aimed to break with conventional presentations, instead offering a pause, or space, where new ideas and insights could flourish. In the following chapter, Pat Cooke, as past Director of Kilmainham Goal and Museum in Dublin, questions the role of heritage and the arts as separate, distinct practices. She recounts numerous examples of how arts interventions came to play a significant role in opening up the history, architecture and symbolism of Kilmainham Goal, an ideologically complex heritage site. She puts forward a strong case demonstrating that art exhibitions, theatrical performances and opera at heritage sites, particularly at sites of contested history, can contribute to the critical, reflexive interpretation of place, provided the performances are seen as autonomous. Helen Wickstead’s paper explores the presentation of the iconic archaeological site of Stonehenge in video format, and poses a challenging notion concerning the potency of moving images, which she sees as both being influenced by the location, and at the same time influencing the physical structure of Stonehenge. In the concluding chapter of this section, Christine Finn takes the concept of ‘home’, something central to most humans and explores the ways in which physical structures can create emotional responses. Using her own home as an installation space, she investigates the ways that responses of intimacy, recall and time passing are engendered.

Part III, ‘Application and Exchange’, presents four case studies that feature the application of archaeological methodology to arts materials or, alternatively, the adoption of artistic display into archaeological practice. Blaze O’Connor records how she excavated and then supervised the reconstruction of the artist Francis Bacon’s chaotic studio in the Dublin City Gallery, The Hugh Lane. By moving the studio, intact and complete with dust layers to the gallery space, the studio was raised to the status of monument. A similar exercise in Australia saw the same attention to detail with the reconstruction of Margaret Olley’s Yellow Room in the Tweed River Art Gallery in northern New South Wales. Working in the Orkney Islands on a Neolithic site, Antonia Thomas demonstrates the potential of inviting a range of artists and performers to use an archaeological excavation as inspiration to create arts experiences and installations in more formal gallery spaces, thus facilitating an opportunity for more critical analysis of the archaeological materials. Michaël Jasmin presents a French perspective on international collaborations and reciprocation between art

practitioners and archaeologists and the resulting tensions between art and science that he sees arising. The authors of the final paper in this section deal with another Neolithic site on the Orkney Islands. Here, film is used to capture and communicate very different qualities in the archaeological record compared to those normally documented with more traditional recording methods. The authors see this approach as a means to activate data that would otherwise lie dormant.

The fourth and final section, ‘Archaeology after Art’, opens with a paper presented, in part, as a dialogue between Mike Pearson and Michael Shanks, in which they define their decades-long collaborations in theatre/archaeology. Seen as the re-articulation of fragments of the past as a real time event, they argue that this approach, which they support with multiple examples, offers a fertile and liberating means of addressing some key concerns about our current understanding of the past. They conclude by stating that the past lives on in our relationships with what remains, and propose that it is up to us to meet the past halfway by returning and revisiting it, by engaging with it, and exploring it in new ways. In the final chapter, Doug Bailey cites a number of radical, and at times raw, articulations between art and archaeology, whose novel spaces he sees as holding the key to providing new insights into the past. He summarises the current state of the intersection of art and archaeology by acknowledging that, while recent influences of contemporary arts practices have expanded archaeological interpretation, substantial work remains to be done.

The contributors to this volume have demonstrated that many themes are common to both art and archaeology, such as time, place, landscapes, material, display, the body and representation. It is not surprising then that the cross-pollination of the two disciplines has provided fertile ground. The case studies described demonstrate that contemporary arts practices have created new and enriched ways of perceiving material remains and have provided new interpretive models that archaeologists can use to explain the past. Although most of the contributors are from the United Kingdom or Ireland, the projects they explore are diverse and incorporate a more international spread. Readers of this book may find their ideas on traditional modes of presentation and exploration of archaeological data and practice shaken, but the papers have demonstrated that the intersection of art and archaeology provide rich pickings for those willing to take the risk.

Ross, J.
Review of ‘Art and Archaeology: Collaborations, Conservations, Criticisms’ edited by Ian Alden Russell and Andrew Cochrane
June 2015
80
S150-S151
Book Reviews
Download
You must be a member to download the attachment ( Login / Sign up )