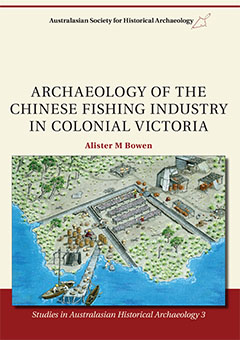 Every so often a graduate  student identifies  a research topic and  finds a great representative  site from which  considerable knowledge  can be gained  by the application  of historical archaeology.  This book, based  on PhD research and  now published in the  Australasian Society  for Historical Archaeology  (ASHA) series,  encapsulates the  results of the all-butforgotten  contribution of the Chinese fishing industry in eastern  Victoria during the second half of the nineteenth century.  The book is much more than just a story about catching  and preserving fish; it is a revealing insight into many facets  of traditional Chinese social and business structure and the  way these developed in colonial Australia.

Prior to the 1860s, the development of the fishing industry  in Australia was hampered by the problems posed by the  transportation of fish to markets: during the 1850–1860s it  was common for whole catches to putrefy before getting to  market. The influx of Chinese gold miners, who regarded  fish as a dietary staple, increased its demand and prompted  the creation of many Chinese fish-curing establishments. As  they were purchasing large quantities of fish, the Chinese  created a new and reliable market for European fishermen.  The fish-curers supplied their compatriots in Melbourne and  on the goldfields with both fresh and cured fish. They made  sums of money far greater than any contemporary European  fishing operation and for many years created hundreds of  jobs for both Chinese and Europeans in the fishing industry.

Archaeology of the Chinese Fishing Industry in Colonial Victoria is a fascinating story through which Bowen  ably demonstrates the major role that Chinese migrants  played in the southeast Australia fishing industry for  nearly three decades (late 1850s–1870s). Fundamental  to their dominance was the use of long established  traditional methodologies (such as salting and pickling) to  overcome the problems of preservation and transportation  prior to the availability of ice-cooling and refrigeration.  The story also highlights how the Chinese fish-curers  lived, worked and interacted in colonial society and why  they seemingly disappeared from Australian history, both  literally and figuratively. They did not disappear without  trace, however, as Bowen cogently demonstrates through  his research based on sparse documentary evidence,  archaeological surveys and his detailed investigation of the  Chinaman’s Point site (the best preserved of the remaining  Chinese fish-curing sites).

The monograph begins with a succinct review of  theoretical perspectives and an outline of previous relevant  archaeological and historical research in Australia. Chapter  2 traces the history of commercial fishing in Australia and  gradually focuses in on Victoria and coastal Gippsland  in particular. Chapter 3 examines China’s nineteenth  century fishing industry and the importance of fish in the  Chinese diet. The following chapter is a thorough  examination of the documentary evidence about Chinese  fish-curing in colonial Australia and the Chinese involvement  in commercial fishing. This reveals a far greater level of  participation than previously realised and puts to bed the  notion that Chinese fish-curers were ‘down on their luck’  ex-gold miners. On the contrary, Chinese fish-curing was  an established practise in Australia nearly a decade before  the Victoria gold-rush era, and involved a complex interrelationship  between entrepreneurial Chinese merchants  and those working for them.

Chapters 5 and 6 outline the field methodology and results  of the survey and excavation of the Chinaman’s Point site.  Comparative analysis (including extensive recourse to  American and New Zealand literature and assemblages)  indicates that the Chinaman’s Point site assemblage  represents a fairly typical colonial period Chinese site.  The industrial artefacts and structural remains confirm that  it was a fish-curing establishment and the site’s occupants  caught the fish themselves. The author has made special  effort to verify hypotheses about the use or role of artefacts  found in overseas Chinese sites which are often taken for  granted, on occasion offering alternative explanations.  The detailed analysis and interpretation of the recovered  materials and remains of structures is particularly  informative about the means and operations of the Chinese  fish-curers at Chinaman’s Point and their wider interactions  with both Chinese communities and Europeans.

Chapter 7 continues to focus on the site by dating as accurately  as possible the occupation period at Chinaman’s Point, while  the second half of this chapter discusses the more significant  information gleaned from the artefact analysis. The final  chapter brings together the evidence from all avenues of the  inquiry. The conclusions confirm the significant contribution  this published volume makes to developing an informed  viewpoint about the Chinese experience in colonial Australia,  especially regarding their massive contribution to Victoria’s  fishing industry during the mid- to late nineteenth century.

This highly readable, well-illustrated monograph provides access to the knowledge gained from a very good PhD project. It elucidates a forgotten or missing chapter in the overall history of Chinese settlement in Australia (there are other missing chapters too), and highlights the significant role a small specialised sector of the nineteenth century Chinese migrants (the fish curers) played in the development of the Victorian fishing industry.

Ritchie, N.
Review of ‘Archaeology of the Chinese Fishing Industry in Colonial Victoria’ by Alister M Bowen
June 204
78
123-124
Book Reviews
Download
You must be a member to download the attachment ( Login / Sign up )