Review of ‘Archaeology and linguistics: Aboriginal Australia in global perspective’ by P. McConvell and N. Evans 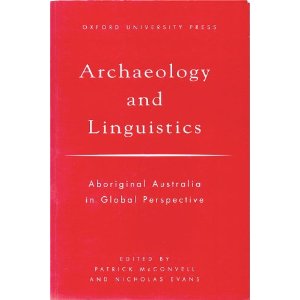 This book is a landmark in the archaeology and linguistics of Aboriginal Australia. Following McConvell (1990), the work flows from the 1991 ARCLING conference in Darwin, which, as noted in the preface (p.xiii), ‘aimed to open up interdisciplinary dialogue on Australia’s past, set in the context of world prehistory’. Boy, did we need it! Unlike colleagues who work elsewhere, even as nearby as PNG, Australian archaeologists have by and large been reluctant to consider how we might cooperate with historical linguists to further our studies of the past. There are several reasons for this reticence, including the well-entrenched views that archaeologists should rely primarily if not solely on arch- aeological evidence, and that unlike the case with, say, the Austronesian languages of the Indo-Pacific, Aboriginal languages are not amenable to much historical analysis. Both these statements are true, I think, to a large extent. That does not mean that archaeologists should not be informed by linguistics in much the same way that they are informed by the earth sciences, physics or history. We should of course remain properly skeptical in our approach to all these disciplines, and any others, but to my mind, neither denying nor remaining ignorant of their potential to help us is a particularly effective way forward. Nor does it mean that linguists should not at least try to wring as much historical information as they can out of the admittedly intractable Australian data. To someone who works in the Pacific as well as Australia, it looks as if they have relegated the job to the too-hard basket for too long, the undoubted difficulties of the task notwithstanding.

So, what is in Archaeology and Linguistics for archaeologists? The book has five parts: ‘Introduction’, ‘Perspectives from afar’ (as opposed to Afar – not even the best historical linguists can go back 3.5 millions years…), ‘Culture contact’, ‘A real study and the Australian east coast’, and ‘The Pama- Nyungan enigma’. It should have an editors’ introduction to each part, but it does not. This reduces its coherence and at times leaves the reader to ponder where things are heading, and why. It is true that the first chapter outlines what happens in the rest of the book. However, in my experience, particularly as a teacher, edited volumes such as this are frequently dipped into, not read from start to finish like a monograph. This means the outline in chapter 1 may not be the useful organising mechanism it was presumably intended to be. Figures and tables are scattered liberally and informatively through most chapters, as well as a handful of plates in Isabel McBryde’s ‘Words, images and material culture’. The standard of production is high, as is to be expected from OUP, and although $65 is getting expensive for a paper- back, the price is par-for-the-course for a book of this sort (I’m probably just stuck in a book price time-warp, ca. 1975, or too used to Academic Remainders’ prices!).

My favourite part is ‘The Parna-Nyungan enigma’, but I’ll start from the start. In addition to describing what follows it, McConvell and Evans’s opening chapter runs through the various strands of evidence which bear on Australia’s deep human past – such as oral tradition, archaeology, linguistics and genetics – to set the scene for the rest of the book. The remaining chapters in part one expand upon some of the intricacies of bringing the different strands together. Bowdler looks at archaeology and linguistics; Koch outlines how comparative linguists do their thing; White considers genes and language.

Part 2 shifts the focus from Australia to ‘afar’, which includes Sahul (Nichols) as well as Asia (Peios), the Americas (Fortescue, Gruhn) and, in Bellwood’s case, the world. In short, this is the ‘context of world prehistory’ bit. Most of the authors discuss the implications for Australia of the over- seas examples they address, though sometimes these appear to be afterthoughts. The papers in part two are aimed at non-specialists, and are generally interesting in their own right. Bellwood’s is perhaps the most immediately relevant to the aims of the book in relation to Australia. Gruhn’s is the most shaky in the same regard, given McConvell’s (1990:7) criticisms of her attempts to relate archaeology and linguistics in Australia and North America.

Part 3’s five papers bring it all back home, to address in detail some linguistic questions concerning northern Australia. Archaeologists unfamiliar with linguistics will find most, if not all of them, heavy going, and may not be able to tease out all the archaeological implications of the findings where such matters are not discussed explicitly. The efforts of Rigsby, Harvey, Nash, McConvell and Evans will nevertheless give the uninitiated a good idea of what linguists get up to, and how they think about the historical dimensions of their subject matter.

Part 4 sees a cultural anthropologist (Keen), a linguist (Crowley) and two archaeologists (Godwin, McBryde) consider a variety of meaty questions regarding the last few millennia of Aboriginal history. Keen includes little if any archaeology or linguistics in his paper on ‘pre-colonial (and post-colonial) Aboriginal social life’, but his work has historical implications that definitely warrant archaeological attention. Crowley’s paper is an attempt to do in northern New South Wales the sort of linguistic history I am familiar with from Melanesia. He gives Australianists a taste of the archaeological up- and down-sides of historical linguistics in a setting more familiar to them than, say, the Bismarck Archipelago. In a complementary vein, Godwin examines the archaeological record through the lens of information- processing theory, and what that may tell us about the linguistic history of north-eastern New South Wales and its relationship to the so-called Pama-Nyungan enigma. Last, but certainly not least, McBryde compares the information content of photographs and early word lists with regard to material culture, and concludes that word lists are superior in some respects, and photos, in others.

Part 5 of the book deals with the origin and spread of the Parna-Nyungan language family, which covers all of Australia except for the Kimberley and Top End (and even there has a representative, in the form of Yonglu). Layton’s chapter uses rock-art analysis to suggest that there may have been an expansion of population radiating from the Murray- Darling region, rather than from the Top End as linguists propose, that is connected with the spread of Pama-Nyungan.

As in most of the other sections, this last part of McConvell and Evans’ book is a mixture of papers by linguists, archaeologists and anthropologists addressing a variety of topics relating to a theme envisaged by the editors. The links to the theme are less than obvious in some papers. Thus Allen’s paper on exchange and the distribution of blades, a very interesting and informative paper in its own right, has little that explicitly expands upon the ‘Parna-Nyungan enigma’ in any detail. Be that as it may, as a group, cradled by Evans and Jones’s speculative piece on the links between Parna-Nyungan, the Small Tool Tradition, cycad processing, the dog and other aspects of intensification, the papers in this final section do, upon reflection, comprise a multifaceted body of work. Part 5 offers some tantalising clues regarding possible relationships between language and archaeology that we, as archaeologists, should explore further. We may eventually turn away again from such investigative avenues, but it would be a shame if the momentum established by McConvell and Evans was lost before some of us took the opportunity they are handing to us to exhaust the possibilities. I recommend the book.

Lilley, I.
Review of ‘Archaeology and linguistics: Aboriginal Australia in global perspective’ by P. McConvell and N. Evans
December 1998
47
75–76
Book Reviews
Download
You must be a member to download the attachment ( Login / Sign up )