Review of ‘Archaeology and Colonialism: Cultural Contact from 5000 BC to the Present’ by Chris Godsen and ‘The Archaeology of the Colonised’ by Michael Given 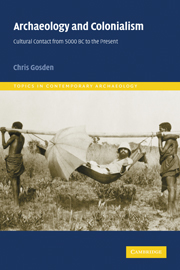 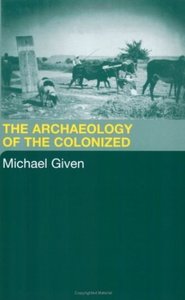 Gosden’s Archaeology and Colonialism is broad in scope, taking what is essentially a ‘top down’ approach to the topic of colonialism. Drawing on the work of World Systems theorists, in particular Wallerstein (1974, 1980) and Frank and Gills (2000), Gosden suggests that it is possible to see forms of colonialism in the archaeological record from as early as 5000 BC. His most significant contribution is the development of a model of colonialism which manifests itself in three different forms, each one then forming the basis for a global comparative discussion in subsequent chapters, with a concluding chapter focussing on ‘power’. ‘Colonialism within a shared cultural milieu’ is the term he uses to describe the earliest (and perhaps most controversial in terms of their acceptance as colonial contexts) colonial forms, such as those that existed from Mesopotamia to the Greeks, and amongst the Aztecs, Incas, Chinese and Tongans. This form of colonialism is characterised by colonial relations between state and nonstate polities, where power is manifest in forms that operate within norms of social behaviour and where the limits of colonisation are controlled not by military power, but by the area over which a particular culture is shared or spread. Colonial ‘middle grounds’ are exemplified by the peripheries of the Greek colonies and the Roman Empire, and early modern contacts with indigenous peoples in North America, Africa, India and the Pacific. These forms of colonialism are characterised by experimentation and creativity, and consist of accommodation on the part of both indigenes and colonists and the development of regularised social relations. ‘Terra nullius’ colonialism, as evidenced by the major settler societies of Australia, New Zealand, North America and Russia from the mid-Eighteenth century, but also by the Mongols and Spanish in Peru and Mexico, is characterised by extreme violence, mass appropriation of land, and the spread of disease which enables the destruction of existing forms of social relations. Active resistance to colonial forms which allow indigenous cultural continuity often exists in such circumstances. Terra nullius colonialism is differentiated from the other forms by the existence of relatively fixed categories of difference, whereas in middle ground colonialism new categories of difference are often created by cross-cultural encounters and in the case of colonialism in a shared cultural milieu, no such categories of difference may exist.

Gosden’s work is informed by a judicious reading of post-colonial theory, particularly in terms of understanding the intellectual traditions that underlie the concept of colonialism, and how nineteenth century views of colonialism influence strongly the way in which it has been studied by academics. He is, like other archaeologists currently working in the field of culture contact (e.g. papers in Torrence and Clarke 2000), strongly influenced by the work of Nicholas Thomas (1991, 1994), whose ideas about the way in which colonialism is mediated by way of material things echo in Gosden’s concluding statement that:

As in his other recent book, Collecting Colonialism: Material Culture and Colonial Change (Gosden and Knowles 2001), by focusing on the material dimensions of colonialism, Gosden is authoring a specific role for archaeology and material culture studies in understanding the range of forms in which colonialism is manifest in both modern and ancient human societies. Gosden’s grasp of his topic is noteworthy, and the book is written in the sort of clear and engaging style that would make it equally accessible to both students and academics. This impressively broad look at the many and diverse forms of colonialism in the post 5000 BC world not only distinguishes itself by developing a convincing argument regarding the various forms of colonialism, but also sets a new agenda for global studies of colonialism, and archaeology’s place in such an endeavour.

In contrast with Archaeology and Colonialism, Given’s interest in The Archaeology of the Colonized is with the lived experience of colonialism for those on the receiving end of colonial regimes, a ‘bottom up’ approach to understanding the materiality of the colonial project. Given’s focus is narrower than Gosden, both geographically and in terms of the forms of colonialism with which he deals. Most examples are drawn from Turkey and Cyprus, although he also cites material from Old Kingdom Egypt, Nazi Germany and nineteenth century Scotland. He is most interested in those particular forms of colonialism which express themselves through taxation and the material manifestations of Empire. This is not necessarily a bad thing, and the material certainly acts in ways which are complimentary to Gosden’s book, by giving greater focus to a series of more detailed case studies, rather than Archaeology and Colonialism’s broad perspective.

Like Gosden (e.g. 2004: 5; see also Silliman 2005), Given sees colonialism as distinct from other forms of cultural contacts in terms of the unequal power relations that characterise colonial systems. Unlike Gosden, Given makes a fairly convincing stab at reviving the sort of ‘Resistance’ model outlined in the influential Domination and Resistance (Miller et al 1998), and other major works such as McGuire and Paynter’s edited volume The Archaeology of Inequality (1991). While Gosden, like other recent authors on the archaeology of culture-contact (eg papers in Torrence and Clarke 2000), is critical of the merits of this approach in a study of colonialism, suggesting it prejudices the terms of the encounter and may only be relevant to some models of colonialism (2004: 22), it seems appropriate to Given’s aim to focus on the ways in which archaeology can contribute to studies of colonialism by identifying specific instances of social impacts brought about by particular colonial regimes:

The most direct involvement of ordinary people with imperial rule is when their hard-won food is removed from in front of them and taken right out of their family, their community, and often their country… this is colonialism, as experienced by the great majority of people who live under it. Tribute begins at the threshing floor (2004:3).

Given’s study is framed in terms of landscape archaeology, drawing, amongst other studies, on the work undertaken as part of the Sydney Cyprus Survey Project (eg Given and Knapp 2003). He employs small vignettes and descriptive passages as narrative devices at various points throughout the text to address issues of gaps in the record, ‘to imagine a lost perspective, form new questions and stimulate new thought’ (2004: 23). This approach is effective in drawing out the agency of individuals in the colonial contexts discussed, where actions of resistance might otherwise be extremely difficult to read (see also Paterson’s (2003) discussion of the ‘texture of agency’ in a central Australian context).

The Archaeology of the Colonised’s chapters focus on the archaeology of taxation (Chapter 3), the role of census, survey and mapping in the colonial project (an issue which has recently been discussed in relation to the archaeology of colonialism in Australia by Byrne 2003)(Chapter 5), imperial landscapes (Chapter 4), forced labour (Chapter 6), the resistance of taxation (Chapter 7), and the ways in which resistance might be ‘read’ in the archaeological landscape (Chapter 8). This book connects with postcolonial theory through its focus on agency, and provides important insights into the ways in which local people engage with systems of centralised control, and how these relationships might be understood through the archaeological record. Its real strength is its engagement with landscape archaeology, and the thorough grounding of the book in a series of appealing (at times even surprising) and inventive case studies. Given’s writing style is innovative and engaging, and the topic one which is both interesting and important.

I think these two books would act in compliment as part of an undergraduate course on historical archaeology or the archaeology of colonialism and culture contact, as each offers a uniquely different perspective. While Gosden’s book is broad and comparative, and develops important insights on this basis of this perspective, Given’s addresses what could be read as a gap in Archaeology and Colonialism (but certainly not in Gosden’s other work such as Collecting Colonialism) in drawing out the experience of colonialism for ordinary people who exist within colonial regimes. Along with a suite of other recent books on the archaeology of colonialism (Lyons and Papadopoulos 2002), culture contact (Fagan 1998; Murray 2004; Torrence and Clarke 2000) or the historical archaeology of indigenous peoples (cf. Harrison and Williamson 2002; Murray 1996) with relevance to Australia, these volumes contribute to a renewed interest from within archaeology on issues of contemporary relevance to both indigenous and non-indigenous peoples in settler societies, and to the development of a truly global perspective on world history. As Gosden notes, ‘colonialism is the major cultural fact of the last 500 years, and to some extent of the last 5000 years, although it is said we now live in a postcolonial world… we are still wrestling with the economic, intellectual and social consequences… by looking at the varying forms power can take we can learn much about the past and unlearn much about the present’ (2004:6, original emphasis). These important books merit a place on the shelves of all scholars interested in the role of archaeology in developing research which has relevance to the experiences of ordinary people in both the modern and ancient worlds, and in teaching students the ways in which archaeology can contribute to contemporary debates regarding modernisation, postcolonial theory, globalization and the oppression of the modern nation-state.

Paterson, A. 2003 The texture of Agency: an example of culture contact in central Australia. Archaeology in Oceania 38(2):52–65.

Harrison, R.
Review of ‘Archaeology and Colonialism: Cultural Contact from 5000 BC to the Present’ by Chris Godsen and ‘The Archaeology of the Colonised’ by Michael Given
2005
60
79–81
Book Reviews
Download
You must be a member to download the attachment ( Login / Sign up )