Review of ‘Archaeological theory: Who sets the agenda?’ edited by Norman Yoffee and Andrew Sherratt 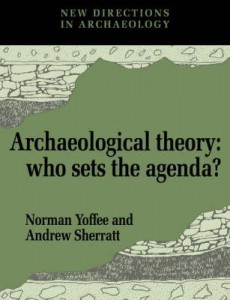 This volume consists of 11 papers, plus introduction, which directly and indirectly critically review and discuss the theoretical debates centred around the development of post-processual archaeology. The authors come from a variety of positions on post-processual theory, ranging from the guardedly supportive, the ambivalent, the constructively critical, to the hostile. Many of the papers were written for a session in the 1988 Theoretical Archaeological Group (TAG) conference at Sheffield University, England. Although five years have elapsed between conference and publication, the book is not as dated as one might assume. This is the case for two reasons. Firstly, many of the papers have been re-written and updated for the publication. Secondly, many of the themes and issues raised by some of the papers are either still being debated or are just emerging in the literature.

There are a number of themes and issues raised and discussed in this book, not all of which can be discussed here. The issues of most relevance to current theoretical debate include the socio-politics and social context of theory development, the role of the individual in archaeological interpretation, and the lack of systematic methodology in post-processual and ethnoarchaeology .

The subtitle of this book immediately raises the issues of power and politics in archaeology: how are archaeological agendas set and by whom? What are the hegemonic processes and structures that ensure certain discourses are privileged? Given the criticisms that have been levelled at archaeology for more than a decade by indigenous people, feminists, and the post-processualists themselves, such issues are fundamental in current theoretical debate. Unfortunately the politics of archaeological theory building is hardly discussed, and little sense of any analysis of who sets and defines the debates emerges from the volume. In part, this is due to the nature of theoretical debate in archaeology. Debate between post-processualists and many of their various opponents has tended to confine discussion to abstract issues of epistemology. Analyses of how archaeological theory interacts with practice, or the effects of archaeological discourse and pronouncements outside of the discipline, are hardly ever made in such debates (but see the paper by C. Chippindale in the volume). In emphasising language and epistemology, post-processualists have constrained the debate at an overly abstract level. Critiques of post-processualism have not helped the situation by polarising the debate as one between empiricism and relativism.

Many of the papers in this volume continue this polarisation. To argue that post-processualism can only lead to relativism, and that the expression of different interpretations of the past is intellectual relativism, misses two important points. The first is that post-processualists do not advocate relativism. They do not argue that all pronouncements about the past are legitimate. By linking pronouncements about the past to discourse theory, post-processualists acknowledge that views outside of the dominant discourse will be given less legitimacy than those pronouncements made from positions of power. They concede that some views of the past outside of the dominant discourse should be seen as legitimate, but do not advocate ‘anything goes’. The second point, and most importantly, is that archaeologists operate within a disciplinary and social hierarchy. Not only will certain archaeologists be given more legitimacy than others within the discipline, archaeological pronouncements in Western societies will be given more legitimacy than those of less powerful groups, while archaeological concerns may in turn be marginalised by more powerful interest groups. Relativism is a non-issue simply because the expression of plural interpretations of the past does not occur outside a political context, and in framing theoretical debate around issues of relativism the debate becomes so abstract that issues of power and privilege are lost.

Although many of the papers offer insights into how the archaeological agenda is set, the who, and subsequently concepts of power and privilege, remain abstracted and ill defined. Perhaps an indication of another unconscious constraining factor on the conceptual scope of the debate is illustrated by the editors’ statement that the idea for the originating symposium was ‘germinated in Oxford over lunches at which the editors (and itinerant friends) regularly discussed the state of archaeological theory’. The position in the archaeological hierarchy of the editors is identified. It is then with little wonder that only one paper is included from a feminist perspective (A. Wylie), only one from a non-archaeologist (again Wylie), and only one from outside England and North America (T. Murray).

One example of the implications of this lack of direct questioning of the political nature of archaeology may be found in the debate about individuals in archaeological interpretations. Post-processual archaeologists reject the processual emphasis on process, and aim instead to establish the individual as ‘actor’ in the past (Patterson 1989). In pursuing this debate outside an identified political context, as is done by papers in the volume, the social implications of the debate become blurred. The primacy of the individual in post-processual interpretations coincides with an increasing conservative Western emphasis on the autonomy of individuals wherein class, gender, race, and ethnicity are dismissed as constraining individual ‘choice’. To what extent the post-processual development is a reflection of this ideology, or to what extent it can be used by such conservatising elements, are not considerations which enter the debate. Although some useful analyses are made in the volume (e.g. C. Gamble, S. Shennan, A. Sherratt) on the social context of certain branches of archaeology and past theories – the lessons learned from these are not applied to current debates. This lack of self-reflection, together with the emphasis on the ‘individual’, may explain the failure so far of post-processualists and mainstream theoreticians to engage with feminist and other marginalised critical archaeologies. It may also explain why this volume fails to really examine who is setting the agenda and why.

Despite the above reservations, the book offers a good cross section of archaeological theoretical debates, and will be useful in providing a summary of some of the debates which centre on post-processual theory.

Smith, L.
Review of 'Archaeological theory: Who sets the agenda?’ edited by Norman Yoffee and Andrew Sherratt
December 1996
43
52–53
Book Reviews
Download
You must be a member to download the attachment ( Login / Sign up )