Review of ‘Archaeological Dimensions of World Heritage: From Prevention to Social Implications’ edited by Alicia Castillo 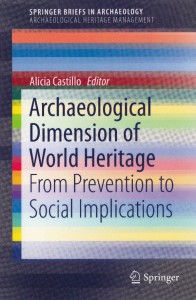 This volume results from the inaugural International Conference on Best Practices in World Heritage: Archaeology, held on the Spanish Balearic island of Menorca (aka ‘Minorca’). The Editor worked with a team of Spanish colleagues and an international scientific committee to bring practitioners from around the world, including a number from Australia, to discuss a range of pressing issues in archaeological world heritage management. The next conference is scheduled for April–May 2015.

The conference was developed with the imprimatur of the ICOMOS International Committee on Archaeological Heritage Management (ICAHM). Described in National Geographic’s (Tourtellot 2012) conference report as ‘One of the most significant global committees that you never heard of’, ICAHM ‘advises ICOMOS and the World Heritage Committee on matters that pertain to all aspects of the management of archaeological sites and landscapes’. On that basis, it is focused on developing internationally accepted ‘standards and best practices for both archaeological research and cultural heritage management’ (<http://www.icomos.org/icahm/>). The volume under review is part of ICAHM’s Archaeological Heritage Management series, produced by Springer in its SpringerBriefs in Archaeology project1.

To these ends, the volume comprises eight chapters, including an introduction by the Editor and her colleague María Ángeles Querol Fernández, and a conclusion by the Editor alone. The introduction is a brief but substantive paper setting out the parameters of archaeological heritage and its management, as well as a rationale for selection of the papers included in the book. The authors’ central point is that there is a pressing need to ‘re-educate the gaze’ (p.10) on archaeological world heritage, away from monumental sites towards something more social and representative. That is not news to people from our part of the world who have been trying to drive that point home for many years, but it is still a major issue elsewhere around the planet, where non-monumental sites are rarely listed.

The six other chapters cover historic central Havana in Cuba, where there are very difficult issues for archaeological heritage managers, including damage to the archaeological record caused by the restoration of built heritage; Cyprus, which luxuriates in its archaeological riches on the one hand but on the other has real problems with accurate documentation of those riches owing to the ways in which they physically intersect and overlap in the landscape; Willandra Lakes in Australia, where work with a range of stakeholders, including local Aboriginal people, farmers and pastoralists, is substantially improving the management of archaeological heritage values; Brazil, which has seen the development of innovative educational programs to connect World Heritage sites with local communities; Libya, where continuing warfare is exacerbating differences in approach that are likely to leave the cultural landscapes of the south neglected while the Classical-age sites of the north are restored; and, in the final chapter before Castillo’s conclusion, the archaeologically-fascinating island of Menorca where the conference was held, specifically how forward-looking urban planning seeks to connect local people to the archaeology and thus help underpin a bid for World Heritage nomination.

The concluding chapter is a declaration of principles and proposals regarding a range of best practices characterised as ‘actions’ (p.108) and ‘tools’ (p.110). It is ‘intended to be a reference for a proactive and dynamic practice of archaeological property management’ (p.105). ICAHM has adopted an abbreviated version of this declaration as the Menorca Statement on the Development and Use of Best Practices in the Management of Archaeological World Heritage Sites, which is posted at <http://www.icomos.org/ icahm/documents/MenorcaStatement.pdf>.

There is no question that the Menorca conference and a resulting publication and declaration or statement were all good in principle for archaeological heritage management, but does this volume succeed in being what Springer’s website says is: ‘a new, original source presenting model strategies … to improve the consideration and treatment of the most outstanding valued sites considered by UNESCO’? I wish it had included more papers, but it is definitely a good start. For me its most valuable dimension, to bounce off the title, is that the work very usefully extends the scope of discussion beyond the ‘usual suspects’, geographically-and linguistically-speaking, to include a variety of insightful perspectives and approaches to what are at root common problems for archaeological heritage practitioners right around the world. It is good to know that one is not alone

when grappling with problem x or y, not out of some sort of personal or professional schadenfreude, but because one gains moral and practical support from people thinking up and bringing to fruition clever ways to approach this or that issue. It can be very wearing to be reminded of the Sisyphean task we all face in managing archaeological heritage, pushing one set of solutions to the top of the pile only to have to start again when a new or recurring set of problems rolls back down towards us. Yet I am always energised by efforts such as the volume in focus here, because they show that the attempt is always worth the effort, despite our never-ending difficulties. As Camus (1955) concluded in the The Myth of Sisyphus, ‘The struggle itself towards the heights is enough to fill a man’s heart’.

Camus, A. 1955 The Myth of Sisyphus. Translated by Justin O’Brien. London: Hamish Hamilton.

1 For the record, I am a member of ICOMOS and Secretary- General of ICAHM. I was on the conference Scientific Committee (as I am for the 2015 meeting) and presented a paper in Menorca, but I am not directly involved with the SpringerBriefs in Archaeology project or its ICAHM Archaeological Heritage Management series.

Lilley, I.
Review of ‘Archaeological Dimensions of World Heritage: From Prevention to Social Implications’ edited by Alicia Castillo
June 2015
80
SS157-S158
Book Reviews
Download
You must be a member to download the attachment ( Login / Sign up )