Review of ‘An Archaeology of Institutional Confinement. The Hyde Park Barracks, 1848-1886′ by Peter Davies, Penny Crook and Tim Murray 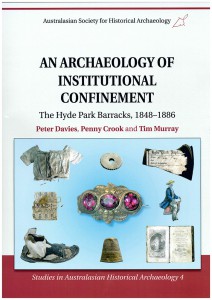 In the last 20 years historical archaeologists have turned their focus to consider nineteenth and twentieth century institutions in England, America, New Zealand and Australia. Taking various forms (e.g. asylums, workhouses, prisons, schools and various ‘homes’), these institutions were often focused on the reform of the individual. The major difficulty facing archaeologists working within this area has been linking artefacts to the residents, whether inmates or staff. The Hyde Park Barracks presents a unique opportunity for archaeologists in that there is an extensive artefact collection, reasonably confined spaces where inmates and staff lived, and a limited time period of use for the building. This allows the artefacts to be securely linked to people inhabiting portions of the barracks.

The Hyde Park Barracks was constructed between 1817 and 1819 to accommodate male convicts. Over the years it was added to, with makeshift buildings gradually surrounding the main building. It was home to an Immigration Depot on the first and second floors from 1848–1886 and the Destitute Asylum for Infirm and Destitute Women on the third level from 1862–1886.

Over the years the Barracks has been subject to multiple excavations by different archaeologists and the records of artefacts recovered were housed in different catalogues, with incomplete records making the analysis of artefacts difficult. As part of the Exploring the Archaeology of the Modern City (EAMC) project, a joint investigation was undertaken by the Historic Houses Trust of New South Wales and Tim Murray (La Trobe University), with funding by the Australian Research Council. This project (undertaken from 2008–2011) resulted in a detailed, refined and expanded artefact catalogue, in particular the correction of 4885 existing records and the addition of 1225 new records from a new analysis of unsorted bulk material. Penny Crook, Peter Davies and Tim Murray use this artefact catalogue, along with historical research, to explore the world of the Hyde Park Barracks.

The monograph consists of seven chapters. The first chapter provides a brief history of the Hyde Park Barracks and its architecture. The second explores the archaeological history of the barracks’ main building by detailing excavations, deposition processes and the nature of the artefact collection, while Chapter Three considers the history of charity and immigration in nineteenth century New South Wales and focuses on institutional care. Chapter Four considers the working of the institution, including room use, inmates, sanitation, medicine, visitors and special occasions. Chapter Five draws on the artefact collection to explore life within the barracks and contains good quality, clear photographs of artefacts. Chapter Six explores the life of the Matron and her family by considering what artefacts from their living spaces can tell us and Chapter Seven considers the theoretical background of institutional archaeology, as well as the findings of the authors in respect to consumption, labour and spirituality. Each chapter ends abruptly and there are no conclusions which draw together the themes and ideas of each chapter, making them seem unfinished.

In this monograph the descriptions of artefacts provide a glimpse into life within the asylum and are a highlight of this volume. The authors discuss objects that can be associated with known activities, in particular sewing, smoking, reading, religious activities and the giving of medicine. For those not familiar with institutions, the artefact-based discussion in the chapter focusing on daily life provides a good insight into the artefact assemblage and the varied day-to-day life experienced by women within the institution. While household assemblages are often dominated by ceramics and bottles (which can provide information about economic activities, status, trade and access to material culture), artefacts within institutions were selected by authorities as being suitable for the social status of the women and with practical considerations taken into account. Within an institution, items that are not highly interpretative in a domestic household, such as matches, have meaning attached to them—for illicit smoking, providing light and as trade objects. This is discussed to some degree within the monograph, but without much detail—obviously the authors cannot include an endlessly detailed discussion of the artefacts without making the monograph unwieldy. However, the sheer wealth of artefacts available for analysis provides a unique opportunity to consider their meaning to the inmates and the internal economy generally.

Unlike households, the inmates of institutions were generally many and the staff as numerous. Hyde Park Barracks is fairly unique in having one matron for such a long period and limited housing for destitute women. This would offer the opportunity to discuss artefacts in a unique way, in particular the question of intentional concealment. The asylum world is one where the women had little power and the need to secrete items of personal importance away from other inmates’ hands is an interesting one. Hopefully future publications will be undertaken that expand this discussion.

Of interest to the archaeologist is the sheer diversity of artefacts recovered, from hat elements, a cap, books, matches, matchbooks and cutlery to a whole bodice and gloves, most of which are related to their wider period of use in Sydney. The authors consider commonality of use and use archival records to explore their use within the asylum. The clear photographs make the volume of use to those working in historical archaeology, not just those working in institutional archaeology.

Interestingly, the theoretical chapter is at the end of the volume; however, it would have been useful to have had this at the beginning as it informs the analysis of artefacts. It is impossible to view artefacts and their meaning without the mental framework we all carry about both institutions and how artefacts are used in daily life. The authors state in this final chapter that they do not view institutions as distinct from factories and the military, and hold the view that a critical element of modernity is institutionalisation of many aspects of life ‘outside of totalising institutions’ (Davies et al. 2013:94). The reader needs more than a sentence to understand this important point and how it affects their analysis of the artefact collection, as this is far from the usual approach taken in institutional archaeology. The authors needed to argue their case for this approach and demonstrate how their beliefs informed their work in order to enable the reader to make an informed decision about whether they supported the argument by following the path of the evidence. The authors seem to assume that all institutional archaeology is about total institutions. It must be noted that the field is more diverse in its view, and is not limited to discussions of social control and discipline, and, as such, it would have been nice to have a more detailed theory section. The appeal of this volume is likely to be much wider than just those interested in institutional archaeology because of the buildings’ use as a museum where the artefacts can be viewed on site. Overall, while this reviewer has some questions about the theory used, this does not detract from the value of this monograph as a unique opportunity to discuss an institutional artefact assemblage closely linked to a group of defined people. It fulfils this role very well and provides an insight into the private world of an asylum.

Piddock, S.
Review of ‘An Archaeology of Institutional Confinement. The Hyde Park Barracks, 1848-1886′ by Peter Davies, Penny Crook and Tim Murray
June 2015
80
S159-S160
Book Reviews
Download
You must be a member to download the attachment ( Login / Sign up )