Review of ‘American beginnings: The Prehistory and palaeoecology of Beringia’ edited by Frederick Hadleigh West 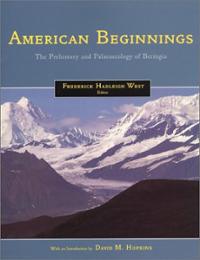 American Beginnings is a long-hoped-for compendium of primary data on the archaeology of Beringia (defined as the land mass comprised of unglaciated northeastern Asia and northwestern North America, and includes the land exposed by successive marine regressions during the Pleistocene’s cold stages). This volume is unquestionably successful in providing ‘a very full representation of the basic scientific data relating to Beringia’ (p.ix) – by West’s calculations, it represents a cumulative total of 1,130 years of field investigations, and represents the work of 56 specialists in New and Old World archaeology. In all, there are 68 substantive contributions under the headings of Palaeoenvironmental Research and Archaeological Evidence. Much of these data are accessible in English for the first time. Importantly, this work transcends the long-standing question of when humans arrived in the Americas, because it only brushes up against the subject of archaeology south of the Cordilleran and Laurentide ice sheets that effectively blocked human movement in the North American mid-continent until after deglaciation was well along. American Beginnings is able to rise above the question because there is apparently no good evidence that, prior to deglaciation, humans had lived on what is now a part of North America (until the terminal Pleistocene marine transgression, the whole area was effectively eastern Siberia).

Australian archaeologists will no doubt find fascinating the contrast between the debates and the data in American Beginnings and the analogous debates and data in Australian archaeology. Australia’s peopling very likely waited for the modem brain to evolve. By contrast, colonisation of the Americas postdated that evolutionary Rubicon, and seems to have waited instead for changes in the global climate. Those changes made the far northern latitudes hospitable for long enough at the end of the Pleistocene to entice the modem people in eastern Asia to cross to the Americas.

Unfortunately the review format does not allow a critical appraisal of the substantive material in this impressive col- lection of primary sources. Rather, scholars of late Pleistocene archaeology and writers of textbooks will be the ones best able to weave these works into the global archaeological narrative, and to assess the value of the observations and claims. I have only the time to comment on the package and the packager.

At 576 pages, and 225 by 285 mm, there was plenty of room in this book to present the substantive findings of more than a thousand years of archaeological inquiry. This work is big in every way. In addition, each paper is well supported by (mostly) clear, always informative black-and-white photo- graphs, line drawings of stratigraphic profiles and artefacts, pollen diagrams, maps, tables of radiocarbon dates and technological summaries, such that anyone keen to be intimate with the archaeological record of Beringia is now better able to be so. Moreover, the binding is handsome and strong, and I was unable to find a typographical error. Thus, there is nothing to complain about in either the scope or the presentation of the substantive contributions.

While West is clearly the mastermind behind the concept and the realisation of American Beginnings, some archaeologists might see as less than masterful his efforts to contextualise and synthesise the material collected here. The Preamble, for instance, deals with some issues raised by the study of Beringia, including relationships with and antecedents in eastern Asia and the Palaeolithic of the Old World. This will be seen as fine, as far as it goes. However, some might be bemused by West’s references to four ‘glacial episodes’ (p.1), and by his use of the Alpine-derived term Wurmian to refer to the last glacial stage, even when he writes about Beringia. Some of his readers will no doubt ask if the oxygen isotope stages inferred from deep sea cores did not supersede the use of a regionally specific glacial nomenclature. West could have forestalled such an obvious criticism by explicitly stating what must be a nostalgic preference for using the Alpine glacial taxonomy so far from its origin. Other archaeologists, especially those schooled in postmodern epistemology, will notice that West’s use and acceptance of problematic categories does not end with his employment of glacial-stage terms. He refers without any qualification, for example, to workers in the 1950s who used the terms Mesolithic and Neolithic to characterise North American stone tool industries. Finally, palaeoanthropologists will disagree with West’s examination of Beringia’s modem human archaeological record and its implications for hominid evolution. Quite amazingly, he forecloses on the question of modem human origins, in finding that ‘by whatever means, Neanderthal cold-adaptation survived in their successors’ (p.9).

The same postmodern archaeologists who would find fault with West’s unconsidered use of problematic cultural categories will have their interest piqued again in Part Three, ‘Conclusions’, Here West admits that ‘the whole is some- what short on theory’, claiming that ‘this was the design’ (p.538). Moreover,

The objective here has been not so much to present a theory, or theories, as such, as to provide a body of evidence which might serve as a reference compendium and which might equally, by its objectivity, be employed to establish different ways of interpretation. But it must be admitted that some involved in this work feel strongly that the evidence presented here really does speak for itself and, with the interpretive aid of Joseph Green- berg, should present a truer picture of American beginnings. (p.538)

West’s less charitable readers might accuse him of having his epistemological blinkers on, in claiming that any of the data presented in the volume could be free of theory or in any way categorically objective.

Finally, proponents of last interglacial peopling of the Americas will not greet happily West’s position on the few claims for very early dates in Beringia, his conclusion that eastern Beringia (read the Americas) was occupied no earlier than 11 to 12,000 years ago, and his explicit refutations of claims for early dates from Pedra Furada (Brazil), Monte Verde (Chile) and Meadowcroft Shelter (Pennsylvania). To give him credit, West has delivered considerable ammunition to undermine such claims, by demonstrating the dearth of evidence for antecedent populations in northern North America. In American Beginnings there is abundant evidence for human occupation of the lower latitudes of western Beringia far back in the last glacial period, yet no credible evidence for occupation of eastern Beringia prior to the Late Pleistocene global warming that precipitated deglaciation and marine transgression.

In spite of such quibbling, this book has much to recommend it and to be commended for. The faults that some will find in West’s editorial additions are more than compensated for in the mass of observation and documentation contained in the pages of American Beginnings. West and his assistants have produced an indispensable reference, a primary source of Beringian archaeology. For most archaeologists on the outside of the debate about the peopling of the Americas, this volume truly represents a beginning – of the ability to assimilate the results of generations of researchers, results that had been previously, for the most part, arcane knowledge.

Hargett, R.H.
Review of ‘American beginnings: The Prehistory and palaeoecology of Beringia’ edited by Frederick Hadleigh West
June 1998
46
58–59
Book Reviews
Download
You must be a member to download the attachment ( Login / Sign up )