Review of ‘Aboriginal Economy and Society: Australia at the Threshold of Colonisation’ by Ian Keen 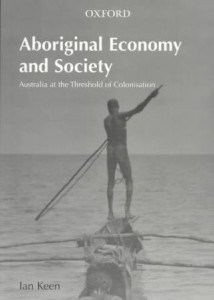 Given the burgeoning interest of archaeologists in the dynamics of Aboriginal societies at the time of British colonisation, this substantial volume focusing on seven peoples and regions from around mainland Australia is both timely and relevant. This book describes mainland Aboriginal economy and society with three major sections profiling the ecology, institutions and economy of the seven study areas. Torres Strait and Tasmanian study sites are not included. Chapters are divided into themes including environments and resources; technology; population; settlement and mobility; identities; kinship and marriage; cosmology and quasi-technology; governance; control of the means of production; distribution and consumption; and exchange and trade. Most of these are problem areas that come clearly within the theoretical purvey of contemporary archaeologists in Australia, regardless of their theoretical bent. That a complex and interdisciplinary exercise of this kind has resulted in such a clearly structured and parsimoniously written text is a great credit to the author. It speaks to meticulous and exhaustive research from myriad sources including social anthropology, linguistics, history, ecology and, not the least, archaeology. The volume sets out to compare the following groups to explore their similarities and differences:

Keen makes it clear at pp.14-16 and elsewhere that the quality and quantity of ethnographic sources varies predictably between these study areas and that the post-contact trajectories experienced by different groups (e.g. Cape York versus Western Desert) will result in different levels of fine-grained information on topics such as settlement and mobility and relations of power. The relative weightings given to these different historical sources remain somewhat opaque, however, being touched on in different ways throughout the text rather than comprehensively at the beginning. Given that this volume must by definition be a reconstructive exercise this seems somewhat of an omission. So, for example, at p.63 we have Sue O’Connor’s (1999) southwest Kimberley pre- and post-contact island archaeology (Koolan and Montgomery Islands) being treated with equal valency as her ethnographic observations – which actually are explicitly and largely based on work by Valda Blundell and previous twentieth century ethnographers. Elsewhere (pp.275-276) while tracing the history of remote social mapping by British social anthropologists such as A. W. Howitt, Keen acknowledges that the first models of pre-contact societies ‘were made decades after people from Britain had appropriated their land and waters, and had begun to farm, while other immigrants mined for gold and other metals’. As any archaeologist struggling under the albatross of ethnographic analogy being potentially a mischievous reflection of pre- or immediately post-contact societies (be they dynamic or normative), I couldn’t help but wonder how the historic linguistics, ethnohistory, early ethnography and contact archaeology were being moderated or correlated against each-other? This methodological quandary was recently addressed in part by Smith (2005) by looking at historic processes of demography and language spread in the Western Desert. This need for a more detailed discussion of the methodology of handling disparate (and unquestionably different quality) datasets is probably my only major and substantive criticism of the volume.

Keen provides a coherent conclusion to the volume whereby the comparisons of 11 previous chapters are brought together, major points of similarity and difference are noted, and explanations for some of these are provided. I will highlight some of these here.

Four broad resource regions are identified comprising the southeast, the ‘grain’ belt, the southwest and the tropical zone. While many resources were shared in common between these areas, the key baskets of staples varied. Key staples which varied across regions included grass and other seeds, Macrozamia, cycad palm nuts, yams and mangrove pods in the tropics. Population densities and technological differences were largely seen to reflect key resources and environment, as was apparel and habitation structures. Residential and logistical mobility configurations were also seen to correlate between these regions.

Identity as established through language was seen to have context-driven ‘shifters’ such as mapping the way groups spoke onto both people and countries. The estimated size of the language/locality identity for all seven study areas was a few hundred people – as Birdsell had originally proposed. Resource richness was linked with patterns of marriage to close kin or people in geographic proximity (but not always), while dispersed affinal alliances were observed for both more arid and some richer resource areas. Shared and long-distance totemic ancestor routes were a mark of more patchy environments and regional interdependence.

With respect to the means of production Keen (p.390) notes that ‘People framed what has been called ‘local organisation’ or ‘land tenure’ according to kin relations combined with idioms of ancestral connections, totemic geography, and totemic identity’. The discussion of organisation of production is, however, cursive noting some basic divisions in gender-specific resource procurement (game versus plant food procurement, and so on) which does not give voice to the detailed human behavioural ecology studies which have now been carried out in Australia in many of these areas (Bird and Bliege-Bird 2005). In my view the treatment of organisational strategies for procurement of food, lithics and general energy harnessing overall, came across as a little binomial/oppositional than more recent treatments indicate. I believe foraging versus logistical mobility ratios shift through the emic cycle in phase with environmental stochastisity; organisational strategies in production of lithics can shift due to episodic phases of environmental stress as a risk-minimising response and so on. The ratios of men to women to children in foraging groups and their prey selections (and companion food suites) are more fluid and responsive than the text suggests in places.

With respect to the major differences between groups, Keen notes that population density and mobility clearly correlate to environment, while phenomena such as cosmological doctrine are more likely to be historical in character. It is clear that he is assiduously eschewing environmental determinism without wishing to downplay the commonality of the configurations of the seven societies on this uniquely arid continent (elaborated on at length in Chapter 2).

Keen reminds us that while correlation does not equal causality (p.394), there may be some explanations for the associations noted (Table 13.10), such as multibased affiliations to totemic sites in arid, unpredictable landscapes as a risk-minimising strategy. In short Keen (p.397) concludes that ‘Environments provided resources and enabling conditions … [while] … social institutions provided instruments for acting in relation to people and the world’. This unquestionably resonates with recent reviews of ecological approaches employed by Australian archaeologists (Veth et al. 2000). Encouragingly, a social anthropologist has for the first time mobilised comparative pre- (and indeed post-) colonial datasets to draw fascinating first-order explanations about the nature and extent of variation across the continent. This material is accessible to and directly relevant to archaeology of contact and the recent period.

Overall this is an overwhelmingly detailed, useful and beautifully crafted comparative volume which is a ‘must-buy’ for all students of past and present Aboriginal societies. This book deservedly won the Stanner Award from the Council of the Australian Institute of Aboriginal and Torres Strait Islander Studies in 2005.

Peter Veth
Review of ‘Aboriginal Economy and Society: Australia at the Threshold of Colonisation’ by Ian Keen
December 2006
63
68-69
Book Reviews
You must be a member to download the attachment ( Login / Sign up )