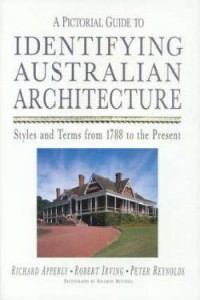 As someone who knows very little about architecture but who has a professional concern with understanding the built environment I was delighted to see that at last there is a book designed with people like me in mind. A Pictorial Guide to Identifying Australian Architecture provides detailed information on architectural components and styles in a way that is simple enough for the beginner to follow yet sophisticated enough to be applied in a professional setting. The authors, all architects, explain and describe architectural styles for those not specialists in the field. The labelled illustrations, numerous photographs, explanatory essays, and the comprehensive glossary make the book a useful guide for the heritage professional.

The authors set out to clarify and define stylistic terms that are commonly used when referring to Australian architecture but that are rarely discussed. Familiar categories such as ‘federation’ and ‘gothic’ are made much less ambiguous and much more precise. Each style is defined by a set of design components, assigned to a specific time period, and its geographic range given. The use of regular criteria for describing each style leads to a systematic scheme that can be readily understood and employed .

The book is divided into six major sections, each dealing with a particular historical period in Australian architecture . These are the familiar Old Colonial, Victorian , Federation, Inter-War, Post-War and Late-Twentieth Century. Within the periods various architectural styles have been identified, such as ‘Old Colonial Regency’ and ‘Victorian Tudor’. The Federation Period for instance is characterised by 12 different styles and 66 styles altogether are described in the book. The author and that some boundaries remain hazy. The way in which the classification system was arrived at is discussed in the introduction and it is recommended that this be read before attempting to use the book. Unless the reasoning behind the use of the period system is understood it can appear unnecessarily confusing.

Buildings are classified according to lists of components , called style indicators, that make up each style. For example, a building in the ‘Victorian Italianate’ style is characterised by a pyramidal tower roof, an arcaded loggia, and either stucco wall finish or polychromatic brickwork, in addition to several other characteristics. Style indicators accompany each style in the book and form a classification scheme that can be applied to any given building. As some of the terms used may be unfamiliar a glossary is provided that defines and illustrates all of the terms used. This is an invaluable aid as it introduces the reader to architectural terminology and enables researchers to accurately name the architectural components of any building.

Along with the style indicators the section on each style is composed of a brief essay, a description , and a listing of relevant references. The essay provides an architectural history of the style and its development in Australia, while historical context is provided in the short introduction to each period. Numerous black and white photographs accompany each section and some are numbered to correspond to the style indicators. The geographic extent of the style is given as well which will be of further benefit to researchers attempting to classify buildings themselves. Major architects that worked in each style are given and the book is indexed by architect, building, and location.

While all kinds of buildings are featured in the book from private homes to churches, warehouses and office towers, the authors have chosen to concentrate on academic rather than vernacular styles. All of the architecture described in the book is the product of conscious stylistic decisions being made on the part of the builder. No vernacular forms have been included that might reflect folk traditions or the need to adapt to materials at hand, as these ‘deserve a different book from this one’. This is unfortunate as it limits the applicability of the book but given the amount of work represented in the book the desire to limit its scope is understandable. It is hoped that that book will be written however because despite the fact that vernacular architecture forms the bulk of the built environment it is too readily overlooked in formal typologies such as Identifying Australian Architecture.

One of the major problems in the book is the lack of analysis of temporal variation. While styles are grouped broadly by date there is no attempt to discuss change through time or the evolution of styles. Each period is presented as discrete, with no reference to what influenced its development or to how it in turn may have influenced what came afterwards. Little differentiation is made between styles that cross period lines, such as ‘Victorian Filigree’ and ‘Federation Filigree’, and unless the date of building is known it is hard to see how one would know to which period a building belonged. While I realise that this may simply be because the style does not change it is unfortunate as it means that the book, and the architectural style, cannot alone be used to date a building of unknown age.

As an archaeologist used to dealing with ‘site specimens’ I guess my complaint stems from the fact that there do not seem to be any in architecture,- or if there are, that they are not described and utilised more in this book. To make the book more useful it would be helpful if certain features or building techniques were attributed to certain periods. On identifying that feature on a particular building one could then assign a rough date to the building, much as in the same way one can roughly estimate the age of a glass bottle if it can be seen to be mould-blown. In the absence of such neat associations one is left to determine the style so that the period can be determined.

It is in determining the style of a particular building that the other major problem of the book lies. While it is easy to go from the style to a building, it is harder to go from a building to the style. In other words while the descriptions in the book make it quite simple to find buildings of the same style, it is difficult to start with a particular building that must be described and to then try to use the book to identify it. As a ‘field guide’, the book would benefit by the inclusion of some sort of taxonomic system so that one could start say with the style of window on a building, and on finding that they are for example crenellated, one would know that that is a component of the styles Georgian Simple and Federation Gothic. Nevertheless there are enough photographs and descriptions that after a bit of trial and error the researcher can come to some sort of conclusion.

Identifying Australian Architecture is written by architects and the detailed technical knowledge that that implies is evident in the book. All of the authors have taught architecture or design and have previously published in the field, which is also evident. Discussions of design components and explanations of technical aspects of architecture are all presented in ways that are relatively easy to assimilate. The stylistic classifications and the formal definitions are useful and not too complex. This book is recommended to anyone involved in recording or describing historic buildings.

Cheney, S.L.
Review of ‘A Pictoral Guide to Identifying Australian Architecture’ by R. Apperly, R. Irving and P. Reynolds
June 1992
34
63–64
Book Reviews
You must be a member to download the attachment ( Login / Sign up )