Review of ‘A Pacific Odyssey: Archaeology and Anthropology in the Western Pacific. Papers in Honour of Jim Specht’ 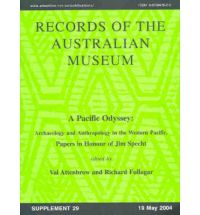 The latest festschrift to honour the formal retirement of yet another of Australia’s pioneering archaeologists brings together 19 papers by 26 of Jim Specht’s friends and colleagues. The ‘Specht-schrift’ stems from a one-day conference organised by the Australian Museum in 2000 entitled, ‘A Pacific Odyssey: Recent Archaeological Discoveries, on the Occasion of Jim Specht’s Retirement‘, which aimed to present and discuss the results of important recent discoveries in Pacific archaeology (p.v). Although the lag between the conference and eventual publication of the volume suggests that many of these discoveries may no longer be so recent, the case studies highlight the range of archaeological and anthropological research underway in the Western Pacific.

Edited by Attenbrow and Fullagar, the volume appropriately begins with a tribute to Specht’s career (Taçon et al.) and a compilation showcasing his extensive publication history (Kahn). Both highlight the depth and breadth of Specht’s work in the Western Pacific and the pioneering nature of much of his research, particularly in the New Britain region – he is, after all, credited as being the first archaeologist of the Bismarck Archipelago. The remaining papers are organised alphabetically, by author, owing to the lack of thematic grouping according to geography, subject or object (p.v).

A strength of the volume lies in those papers that bring new data to bear on old sites or old problems. Athens and Ward, for example, tackle several issues associated with the settlement history of Guam via palaeoenvironmental analysis, while Denham evaluates the argument for agriculture during Phase 1 at Kuk Swamp from new lines of multi-disciplinary evidence. Phytoliths in sediments excavated some 20 years ago from the Reber-Rakival Lapita site provide Lentfer and Green with a means to reconstruct past vegetation change. These and other papers (e.g. Pavlides and Wilson) are a reminder that refining past models and revisiting old sites are as important as finding new ones.

Specht’s first assignment after joining the ANU in 1965 was to follow up the discovery of Lapita pottery on Watom Island (Taçon et al.). The scope of current Lapita research is indicated in papers by Torrence, who argues that a pre- Lapita stemmed tool found by Specht in West New Britain is evidence for the in situ development of a prestige economy in the Bismarck Archipelago; and Summerhayes, who presents recent data on sourcing obsidian from Lapita sites in Anir. In separate papers, Spriggs and Lilley address the issues of continuity and connection in the post-Lapita sequences. Spriggs’ review of the debate surrounding similarities in post-Lapita pottery is particularly useful after Bedford and Clark (2001) threw a spanner in the works at one of the last Lapita conferences. Although Spriggs somewhat conservatively agrees with their claims, arguing that ‘both Bedford and Clark are overstating their case, but perhaps not by much’ (p.142), he argues that better dated and described assemblages are the key to resolving this debate. The possibilities for post-Lapita cultural continuity discussed by Spriggs contrasts with those raised in Lilley’s paper on the Vitiaz Strait region. Here the archaeological sequences are characterised by periods of movement and abandonment associated with highly disruptive local volcanic activity, rather than continuous occupation and pottery production.

Another theme that emerges from the volume is that of repatriation. As Taçon et al. (p.5) note, the Australian Museum has been recognised as a world leader in the return of cultural property, and Specht has been at the forefront of this movement. Papers by Bonshek and Bolton build on Specht’s repatriation efforts by presenting case studies (both successful and failed) on attempts to return items to Vanuatu and the Solomon Islands. On the flip-side of the coin, Knowles and Gosden review a century of collecting in New Britain, a place where Specht himself spent many years as an archaeological ‘collector’. Each of these papers examines the many complex relationships involved in the collection/repatriation process and the role of museums in mediating these social processes.

The rest of the papers vary in content from subsistence studies (Galipaud and Swadling), to the analysis of monuments (Smith), and the integration of oral tradition in archaeological research (Sheppard et al.). I found Sand’s paper on unravelling the ‘mystery’ of Walpole Island to be particularly valuable as it presents material not previously published in English. Sheppard et al. also present a highly informative and interesting review of the use of oral traditions in archaeology. They use their case study in Roviana Lagoon to demonstrate that, when applied critically and in tandem with archaeological research, oral histories can provide a powerful explanatory tool for understanding the past.

The value of ‘A Pacific Odyssey‘ lies not in lengthy reviews but in the presentation of succinct case studies that illustrate the innovative approaches of today’s Pacific researchers. Given the variety of themes, issues and methodologies presented, readers should have no difficulty finding something of interest in this volume, even if their own work lies outside the Pacific. That the editors have relied on the volume’s geographical focus and occasional links to Specht’s career to thread the papers together is probably its main fault, and only a minor one at that. I think a final summation to draw the papers together and position them within the current state of research would have been useful for demonstrating their value beyond just being a tribute. They do, after all, report some major contributions to our understanding of aspects of Pacific prehistory.

Published as part of the Records of the Australian Museum, Supplements series, the volume’s production is professional, typographical errors are minimal (although not absent, for example Torrence’s quote of Kirch on p.170) and its cost is comparable with similar archaeological series, such as Terra Australis. Those who have entered the digital age can even access a copy of each paper on the Australian Museum website in Portable Document Format (PDF), enhancing the volume’s accessibility and portability. Overall, an excellent resource, a must have for anyone keeping up with advances in Pacific archaeology, and an excellent tribute to Specht’s brilliant career.

Crowther, A.
Review of ‘A Pacific Odyssey: Archaeology and Anthropology in the Western Pacific. Papers in Honour of Jim Specht’
2005
60
78–79
Book Reviews
Download
You must be a member to download the attachment ( Login / Sign up )