Red, yellow and black: Colour and heat in archaeological stone 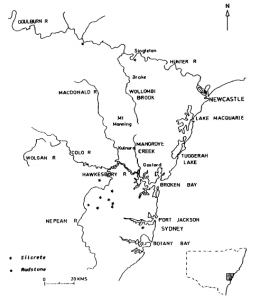 Map of the study area (published in Australian Archaeology 45:54).

Red and yellow silcrete and mudstone source material and Aboriginal flaked stone artefacts, both lustrous and dull in appearance, occur frequently in the Sydney and Hunter River regions of New South Wales. Archaeologists sometimes use colour and lustre as criteria for the location of sources and the identification of heat treatment (e.g. Barton 1993; Rowney 1992).

Goethite, a yellow iron oxide, converts to red haematite when heated (Brindley and Brown 1980; Goss 1987) and rocks containing it may be similarly affected. Heating siliceous rocks can also result in lustre due to textural changes (Domanski and Webb 1992; White and Rowney in press) and sometimes it has been claimed that yellow lustrous artefacts have been heat-treated (e.g. Barton 1993:2).

I contend that the latter claim is untenable as literature review indicates that the temperature required to produce lustre (>350°C) is higher than that at which yellow rock turns red (<300°C) (Tables 1 and 2). I also contend that colour can be an inappropriate indicator of raw material source.

Corkill, T.
Red, yellow and black: Colour and heat in archaeological stone
December 1997
45
54–55
Short Report
You must be a member to download the attachment ( Login / Sign up )