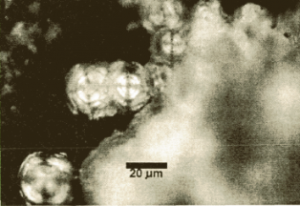 During test excavation of the Ironbark Site Complex under the auspices of the Southern Curtis Coast Regional Archaeological Project (a sub-project of the Gooreng Gooreng Cultural Heritage Project), seven bottle glass fragments were recovered from surface deposits associated with extensive shell midden and quarried stone deposits (Reid 1998). In the absence of obvious signs of intentional modification of the glass, the assemblage was subject to systematic inspection for use-wear and residues.

Ulm, S., T. Eales and S. L'Estrange
Post-European Aboriginal occupation of the southern Curtis Coast, central Queensland
June 1999
48
42–43
Short Report
You must be a member to download the attachment ( Login / Sign up )