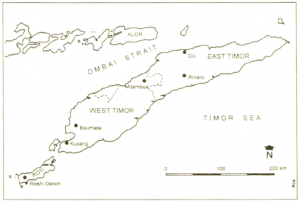 The Indonesian island Flores has been suggested to have been occupied by hominids up to 830 ka ago (Koenigswald and Ghosh 1973), by 730 ka (or 780 ka) ago (Sondaar et al. 1994), or before 800 ka ago (Morwood et al. 1999), and Middle Pleistocene jasperite quarrying has been reported from Roshi Danon in Roti (Bednarik 1998; Bednarik and Kuckenburg 1999). In the absence of such early finds from northern Wallacea it therefore stands to reason that, of Birdsell’s (1957, 1977) three colonisation routes leading to Australia, the southemmost has the best prospects of being the correct version. It would have led from Java and Bali (Bali was connected to Java, and thus to the mainland, at times of low sea level) to Lombok. The most important biogeographical division in the world, the Wallace Line, runs through Lombok Strait. After this, a second sea crossing was necessary, at any sea level during the geological past, from Lombok to Sumbawa, and a third from there to Flores (assuming that some smaller islands such as Komodo were connected to the larger ones).

Bednarik, R.G.
Pleistocene Timor: Some corrections
December 2000
51
16–20
Article
You must be a member to download the attachment ( Login / Sign up )