Patterns of Burning over Archaeological Sites and Landscapes: Prospection and Analysis by Alistair Marshall 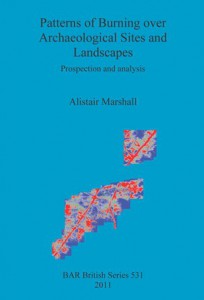 This book presents a series of five papers on the use of magnetic susceptibility (MS) to investigate site function and organisation on several Iron and Roman Age archaeological sites in the United Kingdom (UK). Archaeological prospection in this region typically comprises gradiometry and resistance geophysical techniques, with little use of MS. However, because MS is a good indicator of magnetically enhanced soils (the result of burning or microbial or organic decay), it has been used to supplement other forms of geophysical data and to help determine areas of activity across sites. MS field surveys typically use the Bartington Instruments D-head, an instrument that is pressed against the ground’s surface to log MS readings. In the laboratory, the Bartington MS2B Lab sensor is generally used although this method is slower and results take longer to process. While the D-head is quick, it has been shown to provide only a fraction of the data, since uneven ground surfaces produce inconsistent readings. In order to solve this dilemma, Alistair Marshall, in collaboration with Bartington Instruments, developed a way to log MS readings more quickly and accurately using a ground-insertable probe prototype. Focusing on specific site types (i.e. Iron Age hillforts, Roman settlements) in particular environmental settings (i.e. limestone hills and escarpments), the author examines how the newly developed probe prototype can be (1) a more advantageous and efficient method for mapping MS than the Bartington D-head; (2) used more effectively to supplement previous geophysical results by defining basic patterns (zones of habitation) and functionality (e.g. burning, dumping areas, metal or iron-working); and (3) used as an independent geophysical method overall, especially for understanding site organisation, structure and landscape history.

In the opening paper, the author introduces the ground-insertable probe, a 2.2cm diameter, 31cm long device that is inserted into the ground after soil has been removed from the surface from a spike auger. The instrument then collects readings at a depth of c.30cm below surface. Traditional use of the Bartington D-head instrument proved unsatisfactory in regards to defining clear MS patterns. Using survey intervals of 5m and 2m, Marshall compares the results of both instruments at several Iron Age enclosures and demonstrates that the probe prototype was capable of mapping features that were not detected with the D-head instrument. He explains the direct contact between the prototype and subsurface materials allows patterns to be more easily defined, which in turn provide information on activity areas within each site. This paper also confirms that high-resolution MS surveys can be carried out independently or in conjunction with other geophysical methods.

The first case study in the Cotswolds focuses on using the prototype probe to detect patterns of human activity within Iron Age hillfort sites by defining zones based on magnetic enhancement (i.e. areas of high MS indicate zones of burning, dumping or metal-working; areas of low MS indicate zones of cultivation). Using six sites, four small and two larger hillforts, Marshall provides examples of how variable values (low, medium and high) of MS was used to determine areas of human activity. Since these are Iron Age sites, many contain areas where smelting and iron-working (e.g. heating) activities were undertaken, leaving traces of metal debris that can be easily detected archaeologically through MS. This paper shows how increased MS values coincide with areas used for iron- or metal-working thus providing information on site function and layout. As many of these sites are susceptible to erosion from increased ploughing, the probe has been a successful tool to aid the management and conservation of these sites by providing more details of each site’s local landscape.

In the second case study the author surveys an open Iron Age settlement and a small Roman town using the probe prototype to determine patterns of activity on larger settlements in the Cotswolds. In archaeological prospection, geophysics is typically used to provide a basic layout of a site yet does not always provide a high level of detail within sites, especially those that are large. Because MS allows the rapid collection of detailed geophysical data it was used to define spatial patterning across these large settlements and to determine if patterns were related to various site activities. Looking at the different signals of magnetic enhancement, Marshall shows that there were positive relationships between areas of increased MS and domestic occupation (e.g. refuse dumping) at both sites. Further, the boundaries of both sites were defined more clearly using MS.

In the third case study Marshall uses MS to supplement existing geophysical results in order to define patterns of human activity and site functionality at Early Bronze Age round barrows in the Cotswolds. Rather than the Iron Age or Roman settlements of the previous case studies, this study involved MS studies of spatial patterning and magnetic distributions at five Early Bronze Age round barrows – monuments susceptible to destruction from intense ploughing. Areas of high MS were associated with features such as ring-ditches, structures and quarry pits, whereas low MS values were related to features such as mounds.

The final case study adopts a slightly different approach than those which precede it. Here, the author uses MS to map a large section of land on the Cotwold region (40km2) in hopes of defining areas cleared by burning for agriculture. There have been few instances where MS has been used across such vast landscapes and Marshall aimed to demonstrate how MS could be used to understand long-term occupation in conjunction with long-term land clearing over a particular landform.

Marshall presents a convincing argument as to why this particular method should be considered as an independent tool in archaeological prospection using the new form of instrumentation (probe) and provides several examples to support it. A detailed description of each site in regard to its geographic location and environmental setting is given, as well as its archaeological history, providing the reader with ample information to understand each case study. Detailed black and white figures accompany all five papers, showing the location of each site and the MS results. One colour image occurs in the second case study and 12 in the final one. Appendices present additional information including raw data collected with the probe, size of each case study site (hectares) and site type.

There are several weak points in the book, the major one being the general format and structure. While the overall organisation of the papers was adequate, each paper could have been structured more clearly so that readers could easily follow the material. For example, all figures are listed at the end of each paper, requiring the reader to flip between pages to view the figures accompanying the text. This is especially frustrating for figures used to support the case studies. Further complicating the situation, the figure captions are listed separately and found before the section containing the figures themselves, making it even harder for the reader to stay on track. Although most figures were highly detailed with pertinent information, the level of detail caused some to be slightly confusing and difficult to interpret; fundamental figure components such as legends would have been helpful. Aside from structural issues, there were also inconsistencies in the writing style adopted in the papers themselves. The style of the first paper was quite different to others in the volume, and also happened to be the most difficult to read. The material was poorly organised (e.g. topics bounced between different subject headings), often redundant and hard to follow (e.g. lots of run-on sentences). Had it been more concise and well-organised (in line with the other papers), then perhaps readers would not feel inclined to pass up the rest of the volume.

While Marshall demonstrated that the prototype probe for MS prospection was suitable for the collection of data on Iron and Roman Age sites, readers should be aware of the limitations of this method. Not all sites contain archaeological deposits at 30cm below surface such as the ones examined in this book, and sites with more complex stratigraphy or located in different environmental settings might not be as amenable to this technique. As this technique requires ground insertion for data collection, it may not be suitable for sites of different geology or where there are restrictions on ground disturbance. Finally, not all sites will contain the levels of activity present in the case study sites. Because preservation in these sites was good, Marshall was able to easily define traces of human activity resulting from dumping of refuse, iron-working, cultivation and living areas.

Despite these limitations, Marshall does successfully demonstrate that the probe prototype is a more effective method than the Bartington D-head, that MS can be used to look at inter- and intra-site functionality and organisation, and that, accordingly, MS should be considered as an independent method in geophysics. In addition, this book demonstrated another way for readers to think more about human impacts on the landscape and how those impacts play a role in interpretation and cultural history. For these reasons, I recommend readers interested in new ways of studying and interpreting landscapes, and with a basic understanding of geophysics, persevere past the first chapter and observe how this tool can be used to assist hypotheses about human behaviour especially in regards to how humans function within each site and how they interact with their environments.

Kelsey M. Lowe
Reivew of Patterns of Burning over Archaeological Sites and Landscapes: Prospection and Analysis by Alistair Marshall
December 2011
73
81-83
Book Reviews
You must be a member to download the attachment ( Login / Sign up )