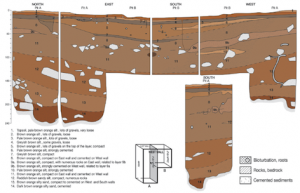 Carpenters Gap 3 (CG3), a limestone cave and shelter complex in the Napier Range, Western Australia, was occupied by Aboriginal people intermittently from over 30,000 years ago through to the historic period. Excavations at CG3 provide only slight evidence for occupation following first settlement in the late Pleistocene. Analysis of the radiocarbon dates indicates that following this there was a hiatus in occupation during the Last Glacial Maximum. In common with most Australian sites, the evidence for occupation increases sharply from the mid-Holocene. Faunal remains, interpreted predominantly as the remains of people’s meals, all suggest foraging of the immediate surroundings throughout the entire period of occupation. Fragments of baler shell and scaphopod beads are present from the early Holocene, suggesting movement of high value goods from the coast (over 200 km distant). Flakes from edge-ground axes recovered from occupation units dated to approximately 33,000 cal. BP, when overall artefact numbers are low, suggest that these tools formed an important component of the lithic repertoire at this time.