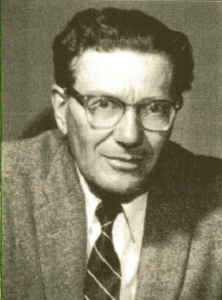 The name of Gallus will mean little or nothing to most younger archaeologists who have received their professional training in Australia. Yet when an adequate historical survey comes to be written about the development of archaeology Down Under there is no doubt that Sandor Gallus will be found a place.

Sandor Gallus left Hungary in 1945 following the Communist take-over and after four years in Austria arrived in Australia in 1949. Previously, with degrees in both Szeged and Budapest, he had worked from 1931 to 1945 in the Prehistory Department of the Magyar Nemzeti Muzeum (Hungarian National Museum), latterly as its Head. His first substantial publication was of the extraordinary series of figural decorated pots of the early Hallstatt Iron Age found in the major barrow cemetery which, with its attendant fortified settlement, overlooked his home town of Sopron on the Hungarian-Austrian border (Gallus 1934). (One of my most valued books is a copy of Gallus’ study, formerly the property of the European Iron Age specialist, Wilhelm Jenny, which I found in 1974 in a Sopron antiquarian bookshop.) While most of Gallus’ early Hungarian field work and publications were centred on local Neolithic, Bronze Age and Iron Age material, he also published a note on a newly identified Palaeolithic site (Gallus 1937)—a hint perhaps of the shape of interests to come.

The early post-War period was hard for many refugees and Gallus’ first five years in Melbourne in various unskilled jobs could be matched by the experience of many Central European intellectuals and professional people who, on arrival in Australia, found their formal qualifications unwanted and unrecognised. Also, there was not a single prehistorian trained in European prehistory in an Australian university until John Mulvaney’s appointment in 1953 to a Lectureship in the Department of History at Melbourne. In the ’60s the first archaeologists to be appointed as such arrived in Australia from Britain, with Isabel McBryde at UNE being the only other indigenous prehistorian in post. Hardly surprising then that a country which in 1957 could ignore the final homecoming of Vere Gordon Childe knew nothing of Sandor Gallus.

Finally, Gallus found a position in the Victorian Education Department where he remained in one capacity or another until he retired. Fortunately for Gallus, Victoria was the one State, with the exception of the ACT whose Canberra Archaeological Society was established by ex-patriot archaeologists from the UK, to have a flourishing and of necessity almost entirely amateur Archaeological Society. Be that as it may, Gallus soon had attracted to himself a devoted and enthusiastic collection of amateurs, physicists, geologists and even local professional archaeologists; subsequently he became President and then Honorary Member of what is now the Archaeological and Anthropological Society of Victoria which in June 1983 dedicated a special volume of The Artefact to him.

While at the time some archaeologists queried the granting to him of research funds by the (then) Australian Institute of Aboriginal Studies, he was elected a Member of the Institute in 1966 three years after becoming an Associate of Current Anthropology, in whose pages he was a frequent commentator on such various and varied topics as genetics, human migration, artefact typology and symbolic systems. In his own Australian research, Gallus had two particular main themes, both really having their origins in interests he had developed as far back as his post-graduate studies in Budapest. First was the Pleistocene spread of humankind and second the examination of material remains as evidence of population movements. Supported by his team of loyal supporters (by whom he was always referred to simply as ‘the Doc? he set out to demonstrate his belief in an early, and for those days very early, Pleistocene occupation of Australia with excavations first at Koonalda Cave on the Nullarbor Plain (Wright 197 1) and secondly at Keilor on the terraces of the Maribyrnong River (for summaries of both sites see Flood 1995:57–59, 103 and 152–154).

His views were nothing if not controversial. But while most would still doubt Gallus’ claims that, rather than waste material, there is at both localities a definite Pleistocene industry with Old World links, it is indisputable that Koonalda’s rock art and mining site was in use between about 24,000 and 14,000 BP. Jim Bowler’s discovery at Keilor in 1971 of an undoubted flake implement in a clay bed which also contained remains of extinct megafauna, seems securely dated to between 45,000 and 36,000 BP. And after all, Gallus is not the only person to have claimed to have evidence of human occupation in Australia with an antiquity of 100,000 to 75,000 BP …

In his last years Gallus fell prone to a distressing illness which cut him off virtually entirely not only from his family but from that stimulus of intellectual debate which up till then he had never relinquished even in the xenophobic nightmare world of post-WWII Australia. In 1965 he had published an article entitled ‘Hungarian history: an analysis’ in the Hungarian language Australian Hungarian Association Calendar. He had often talked of writing a complete cultural, social and political history of his native land but that was not to be.

Early in the New Year of 1997, Sandor Gallus was laid to rest in the Hungarian Community Centre outside Melbourne where a very pretty modem version of a typical Hungarian village church has been built. The service was read—as Gallus would have wished—in Latin. Present were many of the ‘Doc’s’ old crew of volunteers from Koonalda and Keilor days. The occasion was also attended by many members of the local Australian Hungarian Association, of which he had been the first Melbourne President. Someone had found a rather scratchy tape of Gallus at the age of 75 lecturing on the Hungarian diaspora. His ashes have been placed in the crypt of the little church, safe from the uncertainties of burial in a public place.

Hungarians have always been renowned as consummate word-smiths and weavers of tales. Hungarians are also adept in telling stories both about and against themselves. For example, one definition of a Hungarian is ‘Someone who goes into a set of revolving doors behind one and comes out in front’. I’m sure it sounds better in Hungarian, but I like to think that, after having survived many obstacles in two very different parts of the world, now the ‘Doc’ can look back at us and say ‘Well then, who came out in front?’

Flood, J. 1995 Archaeology of the Dreamtime. Sydney: Angus and Robertson.

I am much indebted to the Gallus family and in particular my colleague Dr Alex Gallus for allowing me to use material cited here and for supplying the illustration. James Evans and other members of the Archaeological and Anthropological Society of Victoria also assisted me in finding a suitable image. A complete listing of Gallus’ published work up to 1982 can be found in Megaw (1983).