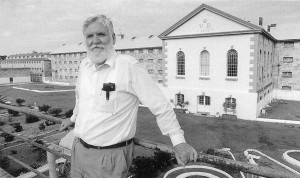 By Richard Mackay, AM

James Semple (‘Jim’) Kerr, (b. 6 July 1932 d. 15 October 2014) AM, was a pioneering heritage administrator, architectural historian and heritage practitioner. Jim influenced cultural heritage management practice in Australia over a long time and made an immeasurable contribution, from key roles in heritage organisations, through involvement in drafting key doctrinal material for Australia ICOMOS, to his magnum opus, The Conservation Plan. Reflecting on the scope of this contribution, perhaps readers who are professional practitioners might contemplate how often each has cited him in submissions or reports and, conversely, how often Kerr cited each of you?

Jim was born William James Semple Kerr on 6 July 1932, in Rockhampton. To his family he was known as ‘Billjim’. With his sisters he was initially schooled at home on Hampden Downs Station, but later attended Toowoomba Preparatory School and then King’s School, Parramatta. After school, Jim was a member of the Royal Australian Naval Volunteer Reserve and represented Queensland, and later New South Wales (NSW), in rowing, narrowly missing selection as part of the Australian team for the 1956 Olympics.

In 1960 Jim married Joan Lyndon (1938–2004) (whom he had met in 1956), at All Saints, Brisbane. Joan was an art and architectural historian, as well as a critical thinker, but above all, she was a lifelong soul mate for Jim. Together and separately the ‘Drs Kerr’ (as James Broadbent would come to call them), were scholarly, rigorous, intellectually formidable and socially convivial. However, at the time of their wedding, their shared interest in art, architecture and heritage was yet to assert itself.

Jim landed a job with Qantas in 1961 and worked in Geneva and London in the early 1960s. During this period, as well as commencing their family together, Jim and and Joan enjoyed lectures on art and architectural history at the Warburg Institute and the Courtauld, and later with Nikolaus Pevsner at Birkbeck College. After a stint in Sydney between 1968 and 1972 they both returned to the United Kingdom, where Jim enrolled in the then brand new Diploma of Architectural Conservation at the University of York. In 1974 both Jim and Joan commenced PhDs at the Institute of Advanced Architectural Studies, also at the University of York. Jim’s doctoral thesis was published in 1984 as Design for Convicts, which remains a classic reference for Australian convict architecture.

After returning to Australia the Kerr family settled in Murdoch Street, Cremorne, in Sydney. Jim was appointed Assistant Director at the NSW National Trust, then in 1978 became Assistant Director at the relatively-new Australian Heritage Commission. Resigning in 1980, (having served exactly the two years he had promised when accepting the position), he returned to Sydney and spent the next 30 years as consultant, author, volunteer, expert and mentor. His connection with the NSW National Trust was invigorated by roles as Chair of the Historic Buildings Committee and advisor on historic cemeteries.

Jim is rightly honoured and should be remembered for his contribution to the discipline and process of cultural heritage management. Edward de Bono, of the Six Thinking Hats fame, has perspicaciously observed that brilliant people are apparent because they can see, looking forward, the side tracks away from the ‘path most travelled’ that often lead to highly productive innovation. Looking back, these side routes are readily apparent, but many cannot see them looking ahead—Jim’s contribution to cultural heritage was like this.

He was able to determine, looking ahead, paths for heritage conservation that today, with the benefit of hindsight, seem

self-evident as best practice. Through a distinguished career Jim determined processes and standards that are now commonplace and obvious, but they weren’t at the time of their inception. At the heart of the Kerr approach was the rigour that separated understanding heritage ‘values’ (to be conserved) from ‘issues’ (to be managed). While focused on buildings, the Kerr methodology engaged with both the importance of evidence and the tension between those who saw the heritage as something for experts alone, and those who conceived heritage significance as something much broader, that might involve divergent community views. He valued places for their formal ‘aesthetic’ qualities, as physical ‘evidence’ and for their ‘association’, whether represented by fabric or not. This thinking profoundly influenced and supported a multidisciplinary approach and was particularly accommodating of the emergence of archaeology as a legitimate element within the heritage discourse of the 1970s and early 1980s. Along the way, Jim was a tireless contributor to the drafting of the Burra Charter of Australia ICOMOS and its related practice guidelines.

Jim’s best known volume, The Conservation Plan, was first published by the NSW National Trust in 1982 and quickly became a standard reference; it is still widely cited and used by heritage professionals, government agencies and property owners. Its strength, throughout seven editions and 12 printing impressions, has been a simple, logical process and alignment with the philosophy and principles of the Burra Charter. The Conservation Plan explains, through examples, how to read the fabric of places, to understand their multiple values and to use that knowledge to make well-informed decisions. Importantly, this work (and the Burra Charter) moved the underlying message and approach of conservation from preventing change to managing change intelligently. The Kerr methodology has exerted global influence, and can be readily seen in contemporary conservation principles in China, England, Wales and Scotland.

Jim was a thorough researcher; one of a rare breed who can undertake primary research, read the fabric of a site and synthesise practical approaches for management. But, reflecting his commitment to reach wider communities through dissemination of his work, and a love of sharing the fruits of his endeavours, he was also an inveterate author and publisher. His numerous published conservation plans comprehensively chronicle major cultural heritage sites such as Goat Island, Cockatoo Island, Admiralty House, Parramatta Gaol, the Sydney Observatory, Yungaba Immigration Depot, Tamworth Gaol and Fremantle Prison. His Conservation Plan for the Sydney Opera House, now in its second phase, reflects and acknowledges the design principles of this twentieth century icon, while recognising that it must evolve to continue as an internationally-significant performance space.

Jim’s contribution has been well recognised with a NSW National Trust Lifetime Achievement Award (jointly with Joan) (1995), Honorary Life Membership of Australia ICOMOS (2003) and the NSW National Trust (2007), and as a Member of the Order of Australia (1999) ‘for service to heritage conservation through organisations including the Australian International Council on Monuments and Sites, and The New South Wales Branch of the National Trust of Australia’.

Jim died on Wednesday 15 October 2014, at Willoughby, NSW. Ordering and cataloguing of his extensive personal papers, and those of his wife, Joan, as well as records of the family history that had been his last project, were, as always, completed to specification and on time. As well as a vast array of primary and published material, Jim kept detailed records of his own research and site analyses; generally prepared by hand and carefully filed in multiple drawers of elegant card files. It now falls to his family to lodge this outstanding research archive—comprising both primary documentation and evidence of a seminal period of conservation thinking and methodology—with the National Library and other institutions.

Jim is survived by his children, Tamsin and James, five grandchildren, a cohort of grateful colleagues, and an extensive set of exemplar publications.

Jim always took particular aversion to the use of the word ‘unique’ and I have had draft material duly returned to me with the word crossed out and the word ‘unusual’ written in its place in his famously neat handwriting. However, that acknowledged, in the current circumstance, the term unique does apply—Jim Kerr was, and is, a unique part of our shared heritage.