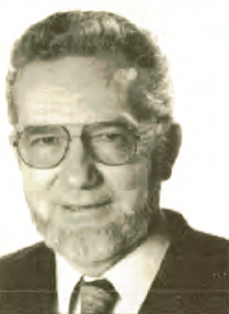 Henry Polach died in November 1996 at the age of 71 years. He was very much the father of radiocarbon dating in Australia, and a significant player on the worldwide stage of radiocarbon.

Henry was born in Czechoslovakia in 1925. He was educated there, and was involved in the resistance movement during the Second World War. This may have been an early indicator of his character, his spirit of freedom, and his willingness to take a somewhat independent and unconventional approach. He completed third year medicine at the University of Brno, before being expelled from the University shortly after the 1948 coup d’etat. He became a political refugee, and escaped to France where he studied English, German and French at the Sorbonne. It was during this time he met and married Dilette.

Henry emigrated with his family to New Zealand in 1951, and worked at different jobs, often more than one at a time, sometimes as a carpenter, to make a new start and to provide for his family. In 1956 he was appointed as a Chemistry Technician at the Institute of Nuclear Sciences at Lower Hutt in New Zealand. In 1959 he was promoted to Technical Officer in Radiocarbon Dating under Dr Athol Rafter. He was also a part-time student and gained a Certificate and then a Diploma (with honours) as a Science Technician.

In 1965 he was invited by the Australian National University to set up a Radiocarbon Dating facility, based on gas proportional counting. He accepted a position as a Research Officer, on a temporary basis. This was another new start for Henry and his family. The new laboratory at ANU was a joint enterprise between the then Department of Geophysics and Geochemistry, Research School of Physical Sciences, and the Department of Prehistory, Research School of Pacific Studies. In the early days, Henry had many problems in setting up the gas proportional counter for dating, using methane as the counting gas. The major difficulty was background instability. After a 6ustrating time trying to find patterns within the data, Henry was able to show a direct correlation between background fluctuations and the operation of an EN tandem Van de Graaf accelerator situated nearby in the Department of Nuclear Physics, Research School of Physical Sciences. Fortunately, one of the PhD students in the Department of Geophysics and Geochemistry at that time happened to be Jerry Stipp, who had been working on the early development of the liquid scintillation counting technique before he came to Canberra. Working together, the two of them quietly set up benzene synthesis lines, and produced a few radiocarbon ages using borrowed liquid scintillation counting equipment. Henry carried out a meticulous study of backgrounds and standards using both gas proportional counting and liquid scintillation counting, and also made contributions to the development of both methane and benzene synthesis techniques. This work convincingly showed that while gas proportional counting using existing housing and facilities was not a viable proposition, liquid scintillation counting certainly was. Shortly afterwards, Henry persuaded the Beckman instrument company to provide a liquid scintillation counter for the Radiocarbon Laboratory.

In 1967 Henry’s position as a Research Officer was made permanent. A series of promotions followed in later years, with the most significant being to the academic position of Fellow in 1977, and later to Senior Fellow (the equivalent of Associate Professor). This was a noteworthy achievement, since Henry did not have a formal degree.

In 1970 Henry was awarded a Churchill Fellowship, which enabled him and Dilette to travel outside Australia and visit radiocarbon facilities in various countries over a period of nine months. He made contact with most of the major radiocarbon practitioners, and several world-wide collaborations began. The 1972 International Radiocarbon Conference in New Zealand brought Henry firmly onto the international stage.

During the 1970s and 1980s the ANU lab became very well known for its contributions to Australian prehistory and Quaternary research. This was due in large measure to Henry’s commitment to ensuring that the work was of the highest technical quality and that the results were interpreted correctly.

Quite a few people received training in Henry’s lab. John Head joined the lab in June 1967. John Chappell and Jim Bowler prepared most of the samples for their PhD studies. Others went on to establish and run other labs—Richard Gillespie and Mike Barbetti in Australia, Alan Hogg in New Zealand, Jindarom Chvajarenpun in Thailand, Sushi1 Gupta in India and Zhou Weijian and Zhou Mingfu in China. Henry maintained good contact and working relationships with these and many other labs, including the lab at the then Australian Atomic Energy Commission under Graeme Calf, and a growing number of overseas labs.

The 1980s saw Henry embark on a research venture with Wallac Oy in Finland, which produced the Quantulus liquid scintillation counter, a wonderful instrument for low level counting of natural radiocarbon samples. These counters are now pretty well standard in radiocarbon laboratories throughout the world.

In retirement Henry remained active in an advisory capacity. He endeavoured to open the channels of communication with countries of eastern Europe (Poland, the Czech Republic, the Baltic countries, Ukraine, Russia) and visited there several times. He was for a time Chairman of a committee sponsored by the International Atomic Energy Agency, Vienna, whose aim is to facilitate and improve on quality control and assurance in radiocarbon dating worldwide. He was also a member of the Advisory Board of the National Science Foundation Radiocarbon Dating Facility at Woods Hole, USA, and a member of the Scientific Committee of the International Conference on Advances in Liquid Scintillation Spectrometry (LSC92 Vienna), as well as co-editor of its proceedings.

Apart from his scientific contributions, Henry is perhaps best remembered for his generosity of spirit, his wise counsel, and his hospitality to visitors and friends.

The 1970s and 1980s were important decades for archaeometry in Australia, and the scientists who learned from and worked with Henry are now the middle or older generation—so it is quite appropriate to think of Henry as the father of radiocarbon dating in Australia.