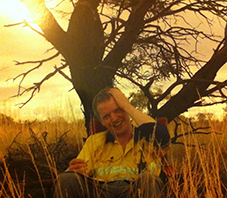 Emmett Connolly was 32 years of age, from Rockcarry, County Monaghan, in Northern Ireland. Emmett was murdered on the evening of 29 September, 2013, in Cootehill, Ireland, leaving behind his parents, Mary and Frank, and his two sisters, Danielle and Leah.

Having studied at the Dublin Institute of Technology, Emmett went on to gain his Masters in Landscape Archaeology at the National University of Ireland in Galway. His studies were followed by archaeological work at the County Monaghan Museum, and then a move to Perth, Western Australia, in 2012.

As a heritage consultant, Emmett travelled a lot with his work, which he enjoyed very much. He had an adventurer’s spirit and this certainly showed during his trips and especially in his four wheel driving! Emmett loved flying off somewhere at a moment’s notice and this was reflected in his jovial personality both in the office and out in the field. His travels carried him to various sites around the Pilbara, and also to Exmouth, Leonora, Laverton, Alice Springs, Kalgoorlie and Adelaide, to name a few. His trip to Bali was an exotic holiday from which he returned glowing and happy.

I can best describe Emmett as a gentle soul, yet one who knew what he wanted and was not afraid to speak his mind. His unique way of looking at life and larrikin ways would always bring a smile to my face—he could wind you up, tease you, call your bluff, but would always use that smooth Irish charm when he knew he had to.

Working in the field alongside Emmett was always interesting—many times we retired in the evening in tears from the humour and laughing that accompanied Emmett wherever he went. On one trip I was laughing so much I actually choked (thanks mate!!). In the office he was always smiling and winding his colleagues up about one thing or another, but never with malice. Dedicated to his work and always showing professionalism and loyalty, Emmett was unique. I swear he must have kissed the Blarney Stone more than once!

Outside of work Emmett was a keen gardener and assisted regularly at the Perth City Farm. His knowledge of farming was an added bonus and he made many friends quickly with his easy-going nature. He has left a void for the many who knew him.

Emmett left Australia in late 2013 after being made redundant on his sponsored visa. He was sad to be leaving but vowed to return to the red dirt and the friends he had made. He was excited about seeing his family again and telling the tales of his travels around Australia, especially the one about being airlifted out by the Royal Flying Doctors following a snake bite near Alice Springs! His trip home, however, was to be his last. On the evening of 29 September he was stabbed to death in the home of an acquaintance—he had only been home for 10 days and this was his first evening out on the town.

The sun may have gone down on Emmett but he is far from absent in the minds of his friends and work colleagues. His light shines on and he will always, for me, be remembered as the laughing larrikin from Ireland.