Northern Australian offshore island use during the Holocene: The archaeology of Vanderlin Island, Sir Edward Pellew Group, Gulf of Carpentaria


Robin Sim and Lynley A. Wallis 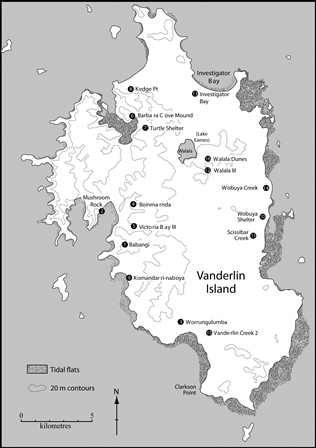 This paper presents an overview of archaeological investigations in the Sir Edward Pellew Islands in the southwest Gulf of Carpentaria, northern Australia. It is argued that Vanderlin Island, like the majority of Australia’s offshore islands, attests to a lacuna in human habitation for several thousand years after the marine transgression and consequent insulation c.6700 years ago. With the imminent threat of inundation, people appear to have retreated to higher land, abandoning the peripheral exposed shelf areas; subsequent (re)colonisation of these relict shelf areas in their form as islands took place steadily from c.4200 BP, with increased intensity of occupation after 1300 BP. Possible links between the timing of island occupation, watercraft technology and the role of climate change are investigated, with more recent changes in the archaeological record of Vanderlin Island also examined in light of cultural contact with Macassans.

Robin Sim and Lynley A. Wallis
Northern Australian offshore island use during the Holocene: The archaeology of Vanderlin Island, Sir Edward Pellew Group, Gulf of Carpentaria
December 2008
67
95-106
Article
You must be a member to download the attachment ( Login / Sign up )