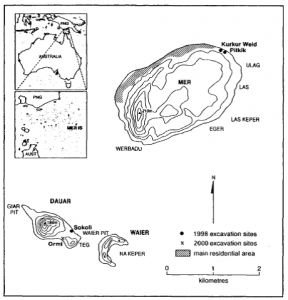 Location of excavation sites on Mer, Dauer and Waier Islands in the eastern Torres Strait (published in Australian Archaeology 52:51).

This paper reports the results of radiocarbon determinations on marine shell and charcoal excavated from archaeological sites on Mer and Dauar Islands in the eastern Torres Strait, Queensland. Commonly known as the Murray Islands, the group consists of the three small volcanic islands of Mer (Murray), Dauar and Waier (Fig. 1).

The Murray Islands Archaeological Project (MIAP) was initiated in 1998 and is being undertaken in collaboration with the Mer Island Community Council and traditional Meriam landowners. MIAP forms the basis of the author’s doctoral research, with a major focus on determining the antiquity of human occupation of the islands, and the identification and timing of the development of the prehistoric horticultural economy (Carter et al. in press a, b). The dates reported here are the first to be recorded for the eastern Torres Strait region, and represent the first, reliable archaeological sequence of this antiquity in the wider Torres Strait (see Table l). Dates are reported and discussed using uncalibrated radiocarbon ages.

Carter, M.
New evidence for the earliest human occupation in Torres Strait, northeastern Australia
2001
52
50–52
Short Report
You must be a member to download the attachment ( Login / Sign up )