This paper reports on an archaeological survey at Evans Bay, Cape York, which recorded a large number of stone arrangements on the rocky headland at Evans Point. We interpret two phases of stone cairn co 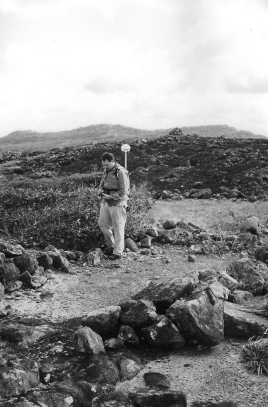 nstruction; the first associated with the building of stone cairns as part of joint Aboriginal and Islander turtle increase ceremonies, and the second with the partial demolition and rebuilding of these stone cairns by tourists and tour operators. Rather than dismiss the disturbance of such sites by non-Indigenous people, as many archaeologists have done in the study of Aboriginal stone arrangements, we seek to document this as archaeological evidence in its own right. We argue this evidence records a specifically colonial response to an Indigenous landscape which has its roots in earlier acts of defacement and erasure of Aboriginal monuments by ‘invaders’ in Cape York. We suggest that such sites of defacement/erasure are best understood as documenting broader colonial processes, representing a palimpsest of contesting responses to a landscape by both Indigenous and non-Indigenous people. Our analysis cites work by Michael Taussig on the mimetic impulse in colonial relations to account for the meaning of the erasure, through mimicry, of such stone arrangements by tourists and tour operators in Cape York.

McIntyre-Tamwoy, S. and R. Harrison
Monuments to colonialism? Stone arrangements, tourist cairns and turtle magic at Evans Bay, Cape York
2004
59
31–42
Article
You must be a member to download the attachment ( Login / Sign up )